As Messi and Ronaldo depart, a new hero rises

The king is dead, long live the king. Or at least that's the feeling the football world shared when Kylian Mbappe’s France took on Lionel Messi’s Argentina and conquered emphatically here in Russia. 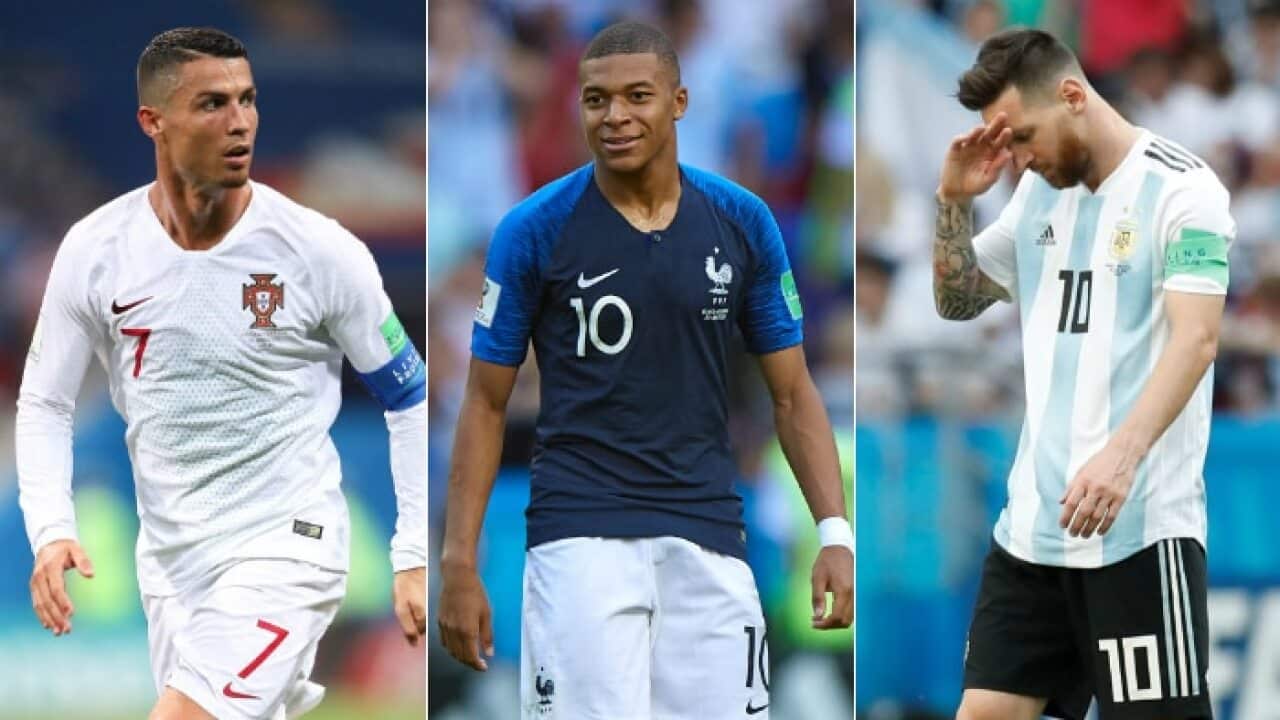 This was a coronation that came faster than anyone could have imagined. Granted, Mbappe is already the world’s second most expensive player, thanks to his €145 million (A$229 million) transfer from Monaco to Paris Saint-Germain, but it was quite shocking to see Messi play well – having a hand in two goals – and still outshone by Mbappe. He scored two himself after an astonishing breakaway saw him earn the penalty for the opener.

In the match that followed, Messi’s long-time rival Cristiano Ronaldo, raised shorts and all, could not save Portugal from defeat to Uruguay. At 33, this FIFA World Cup came a fraction late for “CR7”; at 31, it was still in Messi’s prime orbit.

Advertisement
They are now both out of the World Cup, probably forever. It is not impossible they will be selected again but rather unlikely. Messi has already retired once from the international stage in 2016, his heart broken after a second straight Copa America final defeat to Chile.

They’ll still be the dominant players in La Liga, of course, but the international stage, with all its uncontrollable elements was the one that posed the biggest tests of their talents and emotions.

Messi will almost certainly have one last roll of the dice in next year’s Copa America in Brazil; an attempt to win something of meaning for his country and to avenge the ghosts of 2014. But he will be 32, a slightly diminished version of what he is now. He’ll need all the help that didn’t come his way this past month.

Ronaldo may push for the 2020 European Championships and still have an impact at 35, but his powers cannot go on forever. We all want more chapters in the Messi-Ronaldo rivalry, one that has thrilled and inspired us for more than a decade now. But neither man, no matter how invincible, can dribble past his age.

Regardless, the middle Saturday night of this World Cup marked a seminal moment. The end of an era arrived and a new one began.

Enter Mbappe. The ultimate modern-day player, he is a physical beast with limitless speed and power. The long-awaited designation of Neymar as the game’s best player may never happen. He has a genuine rival – and a possible semi-final opponent in Saint Petersburg.

Arsene Wenger says Mbappe has hints of Thierry Henry; arms and legs that protrude awkwardly but the end result is simply devastating. The way he galloped the length of the field, leaving multiple players in his wake to set up the first goal, was magnificent. The mix of brute force and felt-tipped feet is frightening.

His two goals against Argentina were superb, not just for the technical execution but for staying calm in the moment. He sensed exactly what he needed to do and did it. Perhaps it’s because he’s only 19 but he just seems to be having fun out there. He’s laughing in his goal celebrations.

With France, he forms part of a front third that may be without peer at this tournament. Joined by Antoine Griezmann, they provide dazzling movement and unbreakable confidence. Olivier Giroud gives them a shock-absorbing, physical presence, while Ousmane Dembele remains one of the game’s most exciting prospects, even if this World Cup has come a year or two too early.

France needed this round of 16 game to jolt them into gear. Les Blues are awake now after a fairly gentle group stage. And in Mbappe, they have a player who can split any game wide open. Perhaps even a World Cup final.

Wonderfully for us, the neutral fan, Mbappe should be at the 2022, 2026 and 2030 World Cups. Like Messi and Ronaldo, he won’t be around forever, but may the ride be every bit as satisfying.