Chris Hamilton and Michael Storer (both Team DSM) did a sterling job to set up their team leader Romain Bardet on Stage 20 of the 2021 Giro d'Italia, taking on the might of leading squad INEOS Grenadiers to push clear mid-race. 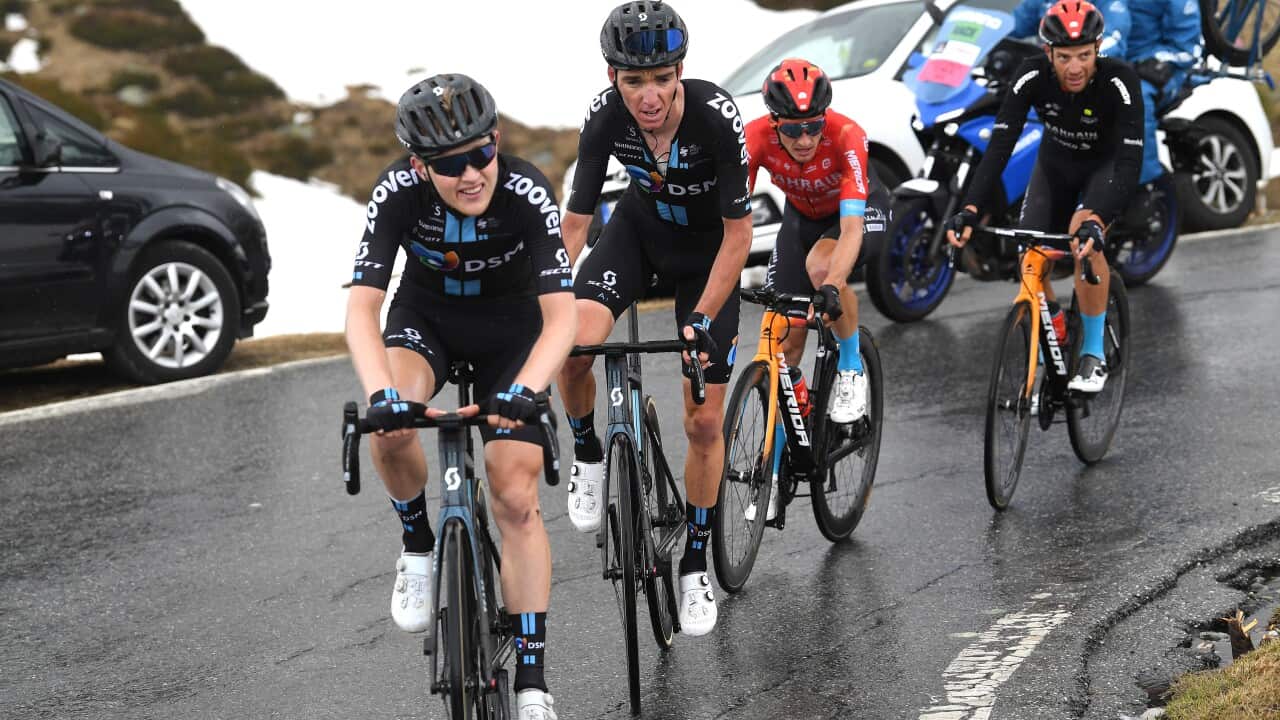 Michael Storer leads the way for Romain Bardet on Stage 20 of the Giro d'Italia Source: Getty

It wasn't the might of individual performances that stole a march on Stage 20 of the Giro d'Italia, but a team performance of note as two Australians helped drive Romain Bardet away from the formidable might of INEOS Grenadiers and keep them free all the way into the final climb.

With 64 kilometres to go, Team DSM went to the front of the peloton, increasing the tempo drastically with Nicholas Roche doing a strong turn. Nearing the summit, Chris Hamilton took over, thinning the bunch out further. He then kept the hammer down on the descent, utilising his mountain bike skills from his days with Torq on the Australian and he, West Australian Michael Storer and Bardet gained a gap over the chasing main bunch.

They were joined by second-placed Caruso, along with teammate Pello Bilbao, forming an impromptu alliance with Bahrain Victorious to further increase the gap on the chasing maglia rosa group.

Advertisement
After burying himself on the front of the break on the descent and flat, Hamilton pulled off, empty, at the foot of the Splügenpass with Storer taking over on the climb. The young climber has shown that he's developing nicely into that role within Grand Tour competition and held the peloton at bay, swapping off with Bilbao to help push out the lead to 40 seconds by the time they reached the final climb of the day, the Valle Spluga-Alpe Motta.

Storer went for as long as he possibly could on the opening slopes before peeling off, leaving Bilbao to do a bit more work before the team leaders had to face the wind for the first time.

Bardet couldn't quite keep pace with Caruso, dropping off with two kilometres remaining and hauling himself up the climb to finish fourth on the day, moving himself up a spot to fifth on the general classification.

In the confusion of the finish and the uncertainty of time gaps within the overall picture of the race, it was nonetheless a very happy Hamilton that talked about his and the team's stellar ride on the final mountain stage of this year's Giro d'Italia.

"(The radio) was breaking in and out, but from what I heard, Romain had a pretty good ride," said Hamilton. "In the meeting we thought if there was a big break, we could get somebody ahead for the flat parts of the descent or even the bottom of the climb, we could use it to our advantage. They didn't quite get the gap that they wanted, but it timed out okay, we caught Niko Denz on the downhill section of the first long climb.

"Romain had good legs and we thought we'd give it a bit of a rip over the top of that climb and see if we can do some damage. Then it went over into the descent, it broke up a bit and we were like 'oh well, we'll commit to this and keep going."

This year's Giro has been something of a breakthrough for the Victorian and West Australian duo on Team DSM, they have both made their impact felt upon the race. Hamilton nabbed a runner-up finish to Andrea Vendrame (AG2R-Citroen) on Stage 12, while Storer has been very important in pacing Bardet on the final climbs of stages when the Frenchman has struggled.

The peak of the Alpe Motta represented the finish line of a successful Grand Tour for the 26-year-old.

"Pretty happy about it, always a nice feeling to make it to the end," said Hamilton. "The time trial for me is not so important but we'll all keep our focus for Romain because it's a big day for him tomorrow and then we can celebrate afterwards no matter what happens."