Australian goalkeeper Aaron Lennox is back training after an horrific collision left him with a fractured jaw and a broken hand while playing for his Scottish club three months ago. 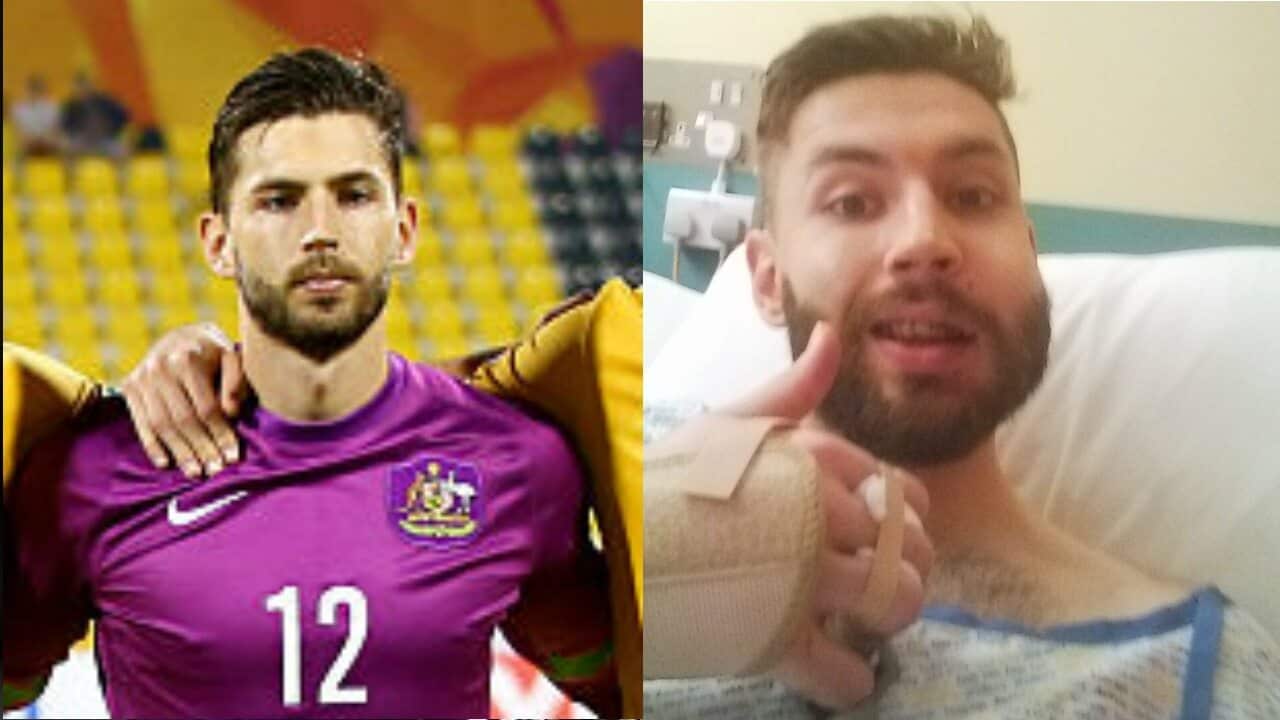 Aaron Lennox in the Olyroos squad for the AFC U-23 Championship in 2016 (left) and with a severely swollen face and bandaged hand after surgery in January. Source: Getty/ Aaron Lennox

Lennox, who was on loan to Scottish Championship side Raith Rovers from Aberdeen at the time, was knocked out cold and had his face and hand shattered in a practice match in January.

The former Olyroo was kicked in the hand and kneed in the face as he charged in to claim a ball during the game.

Advertisement
The 24-year-old suffered a concussion, required surgery on his jaw and hand and also needed dental reconstruction work.

The keeper’s loan to Raith Rovers was terminated after the injury and he rejoined Scottish Premier League side Aberdeen as he recovers.

"I can’t really remember it at all,” Lennox told The World Game.

“It was a through ball which was fairly routine for me to come for. The last thing I remember was taking a step forward to come for the ball thinking ‘I’ve got this easy’.

“Then next thing I know I wake up with the physio on top trying to piece together what had happened but the first thing I asked was 'did I get the ball?'. I learnt what happened later from the other players and the physio staff.

“They all said I got the ball and brought it into my body to protect it, the other player’s gone for the ball, hit the back of my hand and must have come through with his knee into my face.”

Despite being concussed and having severe facial injuries, Lennox was most concerned with the impact his broken hand could have on his career as a goalkeeper.

Lennox, who joined English Championship side Queens Park Rangers in 2011 after leaving the AIS, said the surgery went well and is hopeful he will actually recover stronger than ever.

“There was no issues or problems after surgery,” he said.

“With my hand the fractures are quite nicely naturally splintered, there’s no displacement and it should come back stronger. It’s just been frustrating because your legs still work but you can’t catch a ball.

“When I was on the ground they were trying to stick gauze in my mouth and I was like 'don’t worry about my mouth, my hand feels weird. Focus on my hands, I don’t need my face'.

“My teeth are all healing fairly well but around seven are a little out of place. It’s more the aesthetics now.“

Lennox, who has represented Australia at Under-17, Under-20 and Under-23 levels, is now back training.

He admits he's still some time away from being able to play but said the club's medical staff are amazed with his progress.

“I’m back into goalkeeper training but not full contact at the moment,” he said.

“I’m doing a bit of goalkeeping work, a lot of fitness work. It’s being closely monitored. I keep getting told not to push myself too fast.

“There’s no real date when I will be back playing, it just depends what the doctors say. It’s just going to take some time.

"The doctors were quite shocked with my progress."

Lennox is off-contract with Aberdeen at the end of this season and said he is unsure where his future lies.

He is not ruling any options out, including a possible return home to play in the A-League.

“I’m not sure what’s happening just yet,” Lennox said.

“I am focusing fully on just getting my recovery right. As for the future we’ll see what happens. I just want to play."