Australian midfielder Jordan Lyden’s debut for Aston Villa in the FA Cup has whetted his appetite, with the Perth-raised rookie hoping to figure again for the Premier League strugglers against compatriot Mile Jedinak’s Crystal Palace this week. 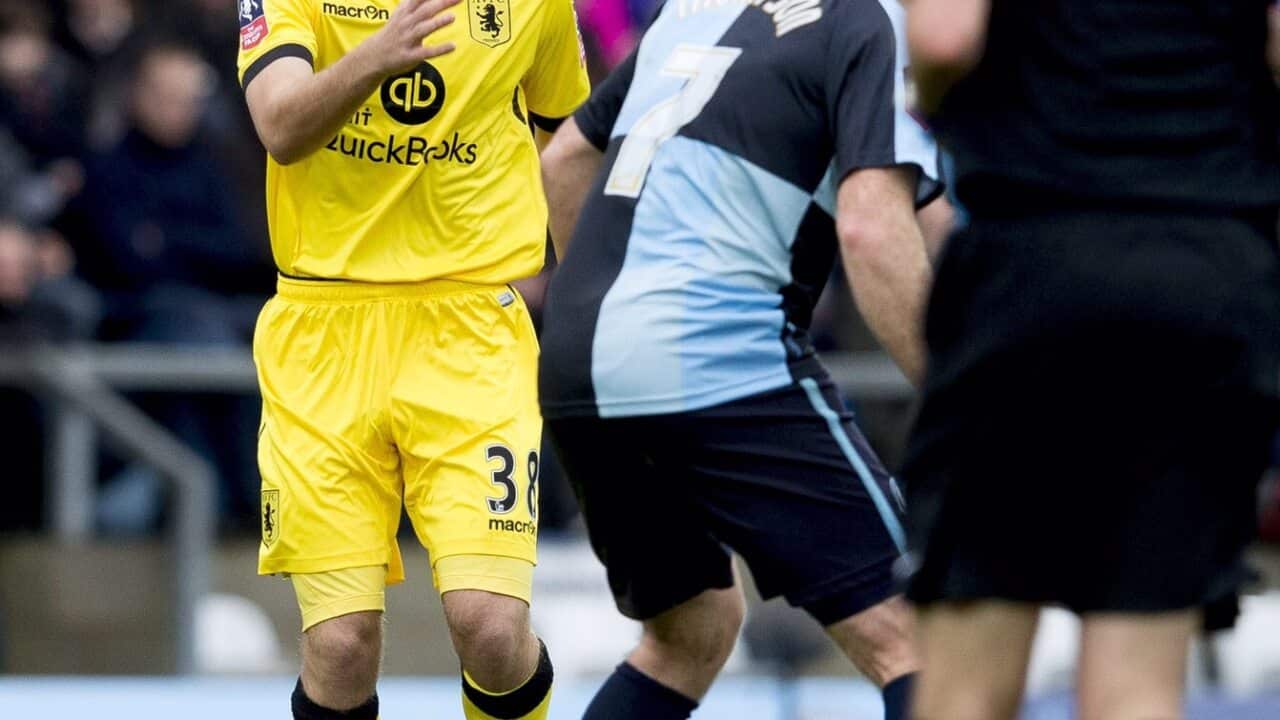 Lyden was on the bench against Arsenal last month in the Premier League but went one better in the 1-1 draw against League Two Wycombe Wanderers at the weekend, replacing skipper Micah Richards late on.

Lyden said he had "mixed emotions” after the match.

“I’m over the moon to have got on but on the down side we didn't get the result we were looking for … I just want to push on now and involved in the Premier League,” he said.

The combative and composed Lyden turns 20 at the end of the month.

“I got about 10 minutes and was happy with how I went on the right side of midfield," Lyden said.

"I saw a fair bit of the ball, made a few runs forward to create space for others and I was really pleased with how it went.

“Now I've had that taste I just want more. We have a lot of games coming up, including the replay obviously, and to be a part of any of them I’d be chuffed to bits."

Lyden has impressed coach Remi Garde with his verve and vigour in recent training sessions with the first team and Villa fans have been calling for his inclusion for several weeks as the side languishes 10 points from safety at the foot of the table .

Relegation is staring them in the face.

Whether he features at Villa Park against seventh-placed Palace on Wednesday (AEDT) is open to conjecture, but Lyden is convinced he is ready to make the step up.

“I think I took my debut in my stride, it didn’t really faze me to be honest and I feel I can build from here now,” he said.

“All of I could think of when I was tapped on the shoulder and told I was coming on was ‘can I get the winner?’.

“Unfortunately I didn't get the chance to change the game for the good, but the experience was huge for me, and hopefully the win we need is coming.”

Villa have yet to win in 11 games under Garde and urgently need three points against Palace to inject a sliver of confidence into the team.

“We still have togetherness, both staff and players, and it was great to see so many of our fans at Wycombe,” Lyden said. “They gave me a good reception when I was warming up and when I went on, and that made me feel really comfortable.

“I always give my all in every match I play, and I think a lot of them will know what sort of player I am. They keep a good eye on the under-21s because that's where a lot of first team players have come from in the past."

While his club fortunes are on the rise, Lyden, who played for the Young Socceroos at the 2014 FIFA Under-20 World Cup in Malaysia, was overlooked for this month’s AFC Under-23 Championship, with Aurelio Vidmar’s Olyroos aiming to qualify for Rio 2016.

The dual nationality midfielder qualifies for both England and Australia but his preference lies with the green and gold.

Despite being fit again for seven months after recovering from recurrent hamstring injuries that sidelined him for a year, Lyden has yet to have any further contact with any of the national teams' chiefs.

“For me, it's maybe not such a surprise because I was out for so long and my main aim has been to get football under my belt," he said.

“That injury really stunted my development, and this year it’s all been about playing and now being involved with the first team hopefully that contact with the national team will come again. I’ll just have to wait and see.

“Both my parents are English and live in Perth but I was born in Australia and it’s my home country.

“I have also been involved with the Under-20s and I would love to represent Australia again, whether it’s maybe at the Olympics or one day with the Socceroos."