Socceroos defender Aziz Behich has found the back of the net for the second straight week as his side Busaspor cruised to a 3-0 away win against Konyaspor in the Turksih Super Lig. 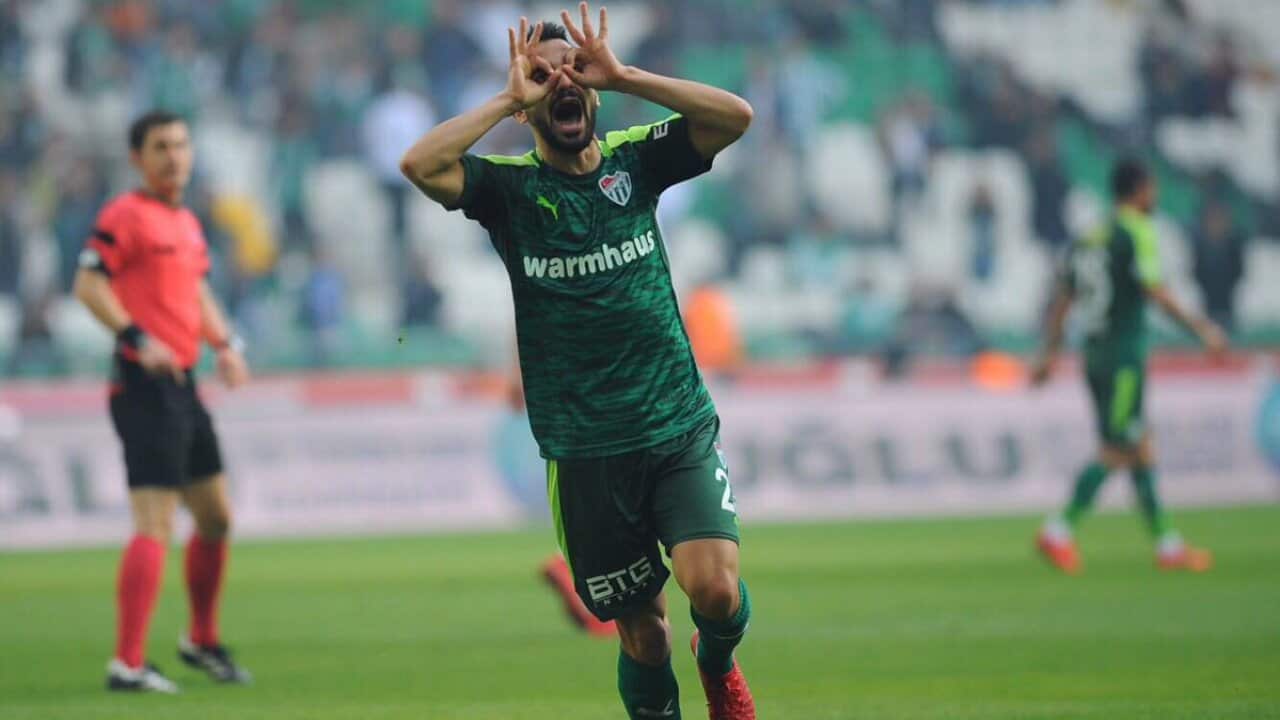 Behich started and finished a slick Bursaspor passing move before firing past the keeper from inside the penalty area in the 45th minute to make it 3-0 and wrap up the win for his side.

It was Behich's second goal in as many weeks and his fifth of the season.

Advertisement
The 26-year-old has been in impressive form this season playing a major role in Bursaspor's recent run of good results.

The result takes Bursaspor to fifth on the Super Lig table.

Former Wanderers striker Kerem Bulut was also in fine fettle in Turkey scoring twice in his side Menemen Belediyespor's dominant 5-1 victory against Bucaspor.


Bulut converted a penalty in the 55th minute to open his account before doubling his tally with a clinical finish in the 76th minute.

The controversial forward has scored six goals this season after joining the Turkish second division side in July.

Menemen Belediyespor move into top spot on the 2 Lig ladder after the win.

In Germany Mathew Leckie delivered a strong performance for Hertha Berlin but it was not enough as they suffered a 2-1 loss to Eintrach Frankfurt.


The Socceroos winger provided a classy assist with a cheeky chip into the penatly area for Davie Selkie to give Hertha a 1-0 lead after 15 minutes.

However, Leckie's efforts weren't enough as Frankfurt fought back to equalise only moments later.

Leckie told Bundesliga.com that his side “fell asleep”.

“We handled it well for the most part of the game but I guess we fell asleep for two situations and were punished with two goals.

“I don’t think Frankfurt was the better team today. They just took the chances they had.”

It was bad news in England for Jackson Irvine as Hull City's Russian coach Leonid Slutsky stood down after only 19 games in charge.

Slutsky had only won four games since taking over the role from Marco Silva in June.

A 2-2 draw at Sheffield Wednesday left the Tigers languishing three points above the relegation zone in 20th spot.

Sparta Rotterdam's Australian duo of Craig Goodwin and Kenneth Dougall were on the wrong end of a 1-0 scoreline as they went down to PSV in the Dutch Eredivisie.

Luuk De Jong struck in the 53rd minute for the only goal of the game to help PSV secure their 10th straight league win.

Both Australian's started the game for Sparta but former Adelaide United winger Goodwin was substituted in the 76th minute, while Dougall, a Brisbane Roar youth product, came off in the 56th minute.

In other Eredivisie action, Mark Birighitti was an unused substitute in NAC Breda's 3-1 win against Excelsior, while Terry Antonis also failed to see action after being left on the bench in VVV Venlo's 2-0 loss to AZ Alkmaar.