Jackson Irvine helped Hull City to a thrilling 5-5 draw against a Bailey Wright-less Bristol City in the Championship on Sunday (AEST). 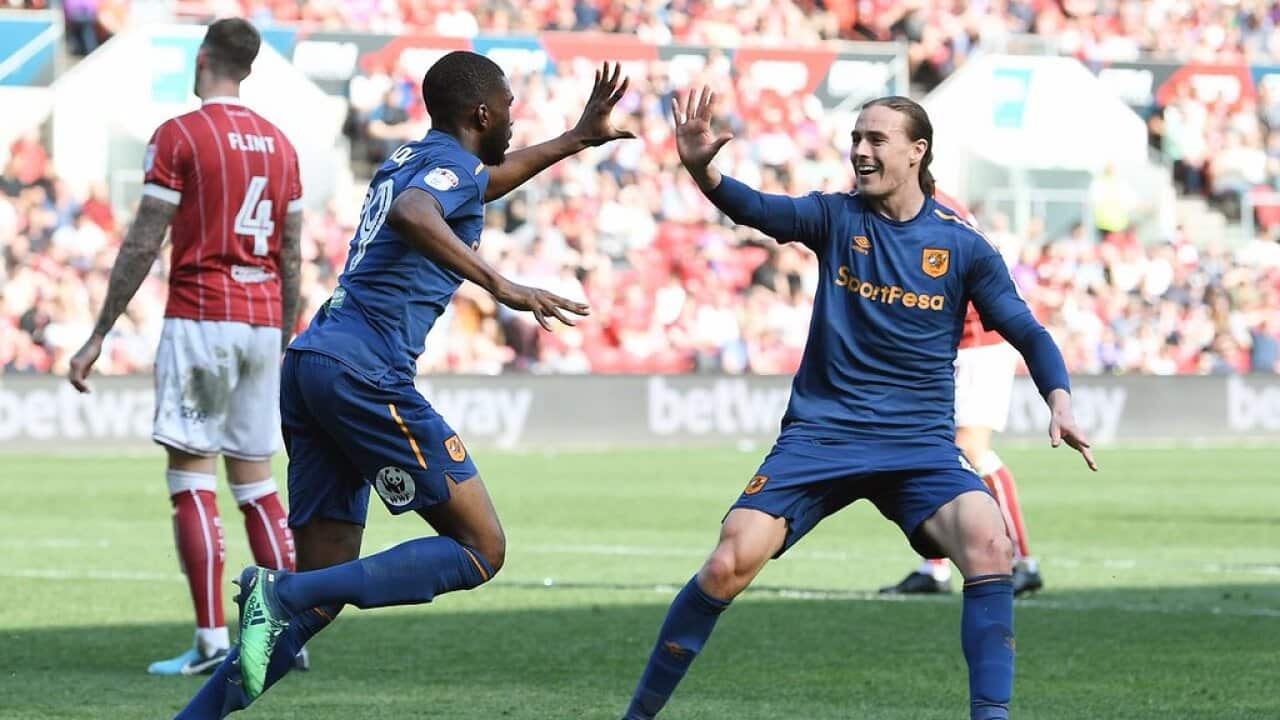 Harry Wilson roared the Tigers in front 15 minutes into the contest following a neat one-two with Irvine, but the joy was short-lived as Marlon Pack and Famara Diedhiou struck inside three minutes to hand City the lead going into the break.

Things got better for Bristol after the restart, with Diedhiou and Bobby Reid on target just past the hour-mark either side of a Frank Fielding own goal.

Despite the two-goal deficit, Irvine’s Hull sprung back into life to complete a remarkable second-half comeback courtesy of Wilson, Abel Hernandez and Fraizer Campbell.

Advertisement
And though Campbell’s 87th-minute effort looked to have given Nigel Adkins’ men all three points, Joe Bryan’s 93rd-minute equaliser made sure both sides left with a point.

While Wright’s hopes of Premier League promotion now hang by a thread with two games remaining, Mile Jedinak’s Aston Villa consolidated their top-six berth with a 4-0 win away to Ipswich Town.

The Socceroos skipper produced yet another solid display at centre-back alongside James Chester, with Ipswich striker Martyn Waghorn and fellow Aussie Ben Folami struggling to find any joy in the final third.

Massimo Luongo’s Queens Park Rangers could not follow suit however as Brentford held on for a 2-1 victory despite the Socceroos midfielder’s best efforts to turn the tide.

In Scotland, Lyndon Dykes was again on target for Queen of the South in the Championship, this time in their 3-0 win against third-placed Dundee United.

As were Ryan Edwards of Partick Thistle and Hibernian’s Jamie Maclaren, who both scored in Premiership victories over Hamilton Academical and Tom Rogic’s Celtic respectively.

Degenek’s top-flight future is now in jeopardy alongside fellow Japan-based Aussies Mitchell Duke and Mitchell Langerak, who both tasted defeat for Shimizu S-Pulse and Nagoya Grampus.

Aziz Behich's Bursaspor had no such trouble against Karabukspor in Turkey, as did Trent Sainsbury in Switzerland with Grasshoppers.