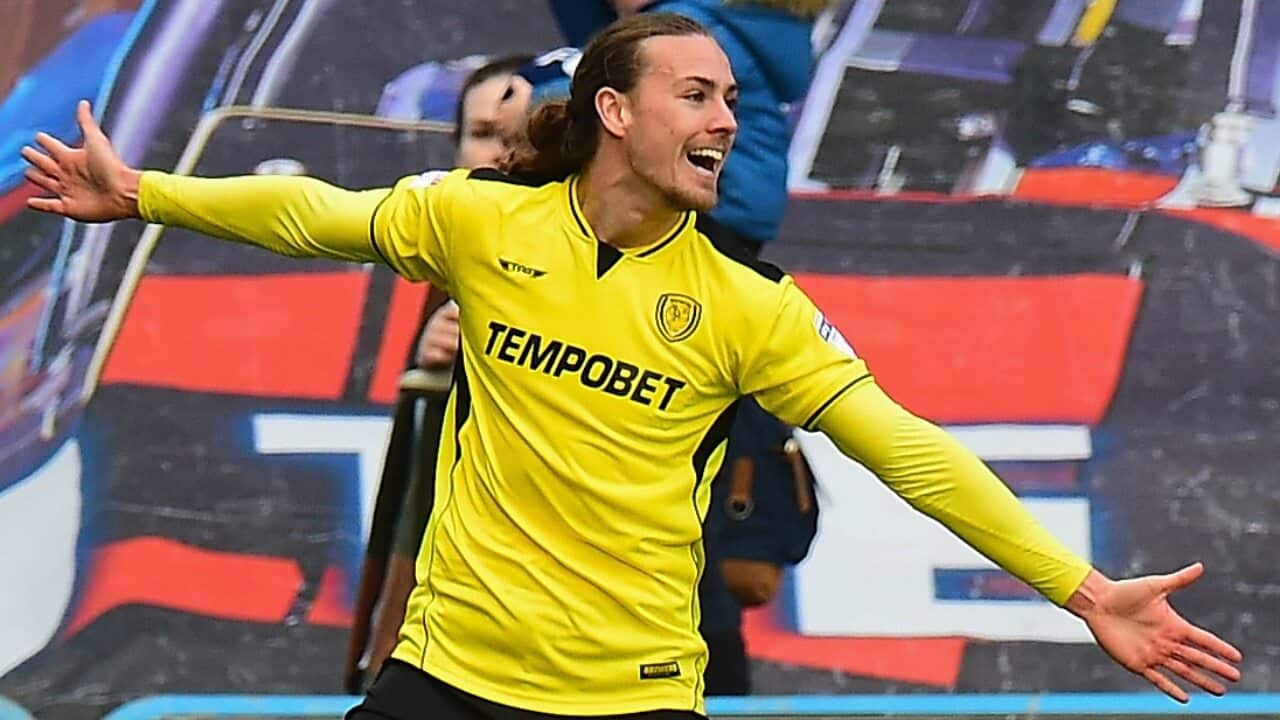 Jackson Irvine has capped off a great week for club and country by scoring a 96th minute for Burton Albion in a shock 1-0 winner away to high-flying Huddersfield.

Irvine, who scored his first international goal with Australia against the UAE on Tuesday, came off the bench in the 63rd minute and made the most of his opportunity by slotting home Marvin Sordell's pass.

Advertisement
Both Irvine and Mooy traveled back from Australia this week, but it was only Mooy who started the match.

Mooy was heavily involved as Huddersfield dominated possession but failed to capitalize on the control.

The former Melbourne City midfielder had a game high 103 touches and 92 passes, set up two chances, had two shots but it wasn't enough for Huddersfield who, despite the loss, remain in third position on 71 points.

The brace means Rukavytsya has scored four goals in 13 starts, in his second season in Israel.

Elsewhere, former Melbourne City winger David Williams put in a man of the match performance for his Hungarian side Szombathelyi Haladás, winning a penalty, setting up a goal and scoring himself in a 4-2 win over Mezőkövesd Zsóry.

Williams ran onto a long diagonal ball in the 67th minute, before sliding the ball past the on-rushing goalkeeper to make it 4-2.

The Indigenous Australian has seven goals and three assists in 14 starts as Haladas moved within three points of the Europa League qualification spot.

Brad Smith, was once again left on the bench as Bournemouth had a 0-0 draw with Southampton.

Bailey Wright also played 90 minutes for Bristol City as they loss 2-0 to Brentford. Wright made 57 touches, 10 clearances and 39 passes. The loss means Bristol drop to 21st position, one point above relegation.

In the Netherlands, Jason Davidson played 90 minutes in Groningen's 0-0 with AZ, while Craig Goodwin came off the bench in the 56th minute in Sparta Rotterdam's 2-0 loss to PSV.

Mat Ryan kept a clean sheet in Genk's 4-0 win over Lokeren as the Belgium play-offs begin.

Ryan McGowan picked up a yellow card as Guizhou Zhicheng went down 1-0 to Hebei CFFC.

Both Ryan Edwards and Scott McDonald picked up yellow cards in the Scottish Premiership, with Edwards' Patrick Thistle winning 2-1 over Ross County, while McDonald's Motherwell secured a 1-1 draw with Rangers.