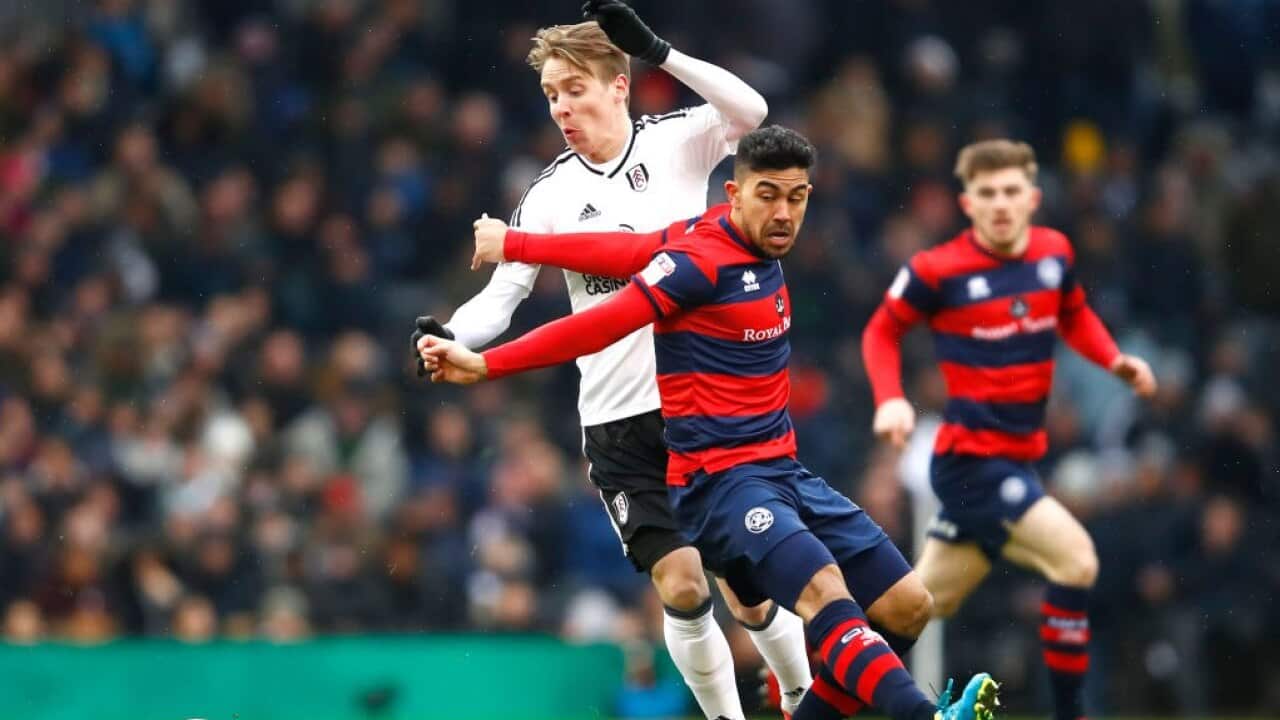 Luongo challenges for the ball in QPR's 2-2 draw with Fulham Source: Getty Images

Fulham looked on track to secure an easy win with a 2-0 lead going into half-time before Luongo struck to turn the momentum of the match.

Luongo, controlling a high Matt Smith free-kick into the box with his head, turned and volleyed the ball past the outstretched arms of the keeper in what one of QPR’s best goals of the season.

Advertisement
The sumptuous finish was Luongo’s fifth goal of the campaign and third in his past five games.

QPR completed the comeback in the 82nd minute thanks to a Pawel Wszolek equaliser.

The result ensured QPR remained well clear of the relegation zone in 15th spot on 47 points with eight games to play.

Socceroos and former Sydney FC goalkeeper Danny Vukovic suffered a narrow defeat in the Belgium Cup final with his Genk side going down 1-0 to Standard Liege after extra-time.

Vukovic was left stranded only two minutes into extra-time when Liege’s Renaud Emond snuck in at the back post to head home from close range.

Genk nearly forced the game to penalties in the dying stages but Liege shot-stopper Jean-Francois Gillet pulled out a miraculous save to deny Joseph Aidoo’s powerful header.

It was a heartbreaking result for Vukovic one year on from taking home the A-League Premiership and Championship double with the Sky Blues.

Nikita Rukavysta proved his Socceroos selection was deserved with a double in Maccabi Haifa's 4-0 win against Hapeol Akko.

The pacy attacker opened the scoring for Haifa with a clinical finish in the 19th minute. Rukavytsa played a slick one-two pass at the top of the penalty area before taking the ball around a defender and tapping past the keeper.

The former Perth Glory and Western Sydney Wanderers forward then doubled his tally just after half-time with another great finish.

Haifa wrapped up the win against bottom placed Akko with two more goals in the dying stages of the second half.

The double takes Rukavytsa's goal tally to 14 for the season.

Mooy got through the entire 90 minutes in what was only his second game back after recovering from a knee injury.


The Terriers struggled to build any momentum against Palace despite playing at home and were unable to get a shot on target before the 81st minute.

Goals to James Tomkins and Luka Milivojevic were the difference for the Eagles as they snatched a valuable three points.

Huddersfield drop to 15th on the table after the defeat, only three points above the relegation zone.

Mat Ryan watched on from the bench as Brighton’s FA Cup dreams were destroyed in a 2-0 loss to Manchester United at Old Trafford.

Tim Krul got the start in the Brighton net for the match but couldn’t stop United, who struck in the first half through Romelu Lukaku before Nemanja Matic’s second ever goal for the Red Devils secured the win in the final stages of the clash.

With Bochum down 2-0 to SV Sandhausen midway through the first half, Kruse and co. sparked a classic comeback as a Lukas Hinterseer hat-trick helped seal the 3-2 win.

Kruse delivered the assist for his side’s winning goal delivering a pin point pass for the Austrian international to bury the ball into the back of the net.


With four goals and four assists to his name for the season, Kruse enters Bert van Marwijk’s Socceroos camp with Bochum currently 12th on the league table, 10 points adrift of third place and the sole play-off spot.

Buoyed by his recent Socceroos selection, James Meredith delivered another solid performance for Millwall as they claimed a 2-0 win on the road against Barnsley.

Meredith played all 90 minutes in the Lions’ win, the club’s sixth consecutive away victory.

Tim Cahill was a late substitute coming on in the 90th minute to replace Steve Morison.

Milwall now move up to 10th spot on the Championship ladder and sit only four points behind Middlesbrough in the sixth and final playoff position.

The promotion hopes of Bailey Wright’s Bristol City also received a boost over night with the side defeating Ipswich Town 1-0.

Wright was moved away from his usual right back position to central defence for the clash but was a solid contributor as he played the full match.

The win ended Bristol City’s recent form slump and moved them to within one point of the playoff spots in seventh.

It proved to be a far different story for Jackson Irvine who played 57 minutes for Hull City as the Tigers were thrashed 3-0 by Birmingham City.

Mile Jedinak’s Aston Villa also went down with the Socceroos captain an unused substitute in the 1-0 loss to Bolton.

And Brandon Borrello was unable to help Kaiserslautern overcome St. Pauli, playing 65 minutes in a 1-1 draw that leaves his side rooted to the bottom of the 2.Bundesliga table and eight points adrift of safety.

Elsewhere, Aziz Behich produced the telling assist in Bursaspor’s 1-0 win over Sivasspor in the Turkish Super Lig on Sunday morning (AEDT), finding Bogdan Stancu late in the second half for his seventh goal of the season.

James Jeggo was a full participant in Sturm Graz’s 1-0 victory over Rheindorf Altach – a result that leaves the Austrian side secure in second place, five points behind leaders Red Bull Salzburg.

In Austria, James Holland played 90 minutes for LASK Linz in their 3-1 win against SV Mattersburg, while in Portugal Awer Mabil was a 90th-minute substitute for Pacos De Ferreira