A Mile Jedinak penalty helped Australia salvage a 1-1 draw against a typically skilful Japan in their 2018 FIFA World Cup qualifier at Docklands Stadium in Melbourne. 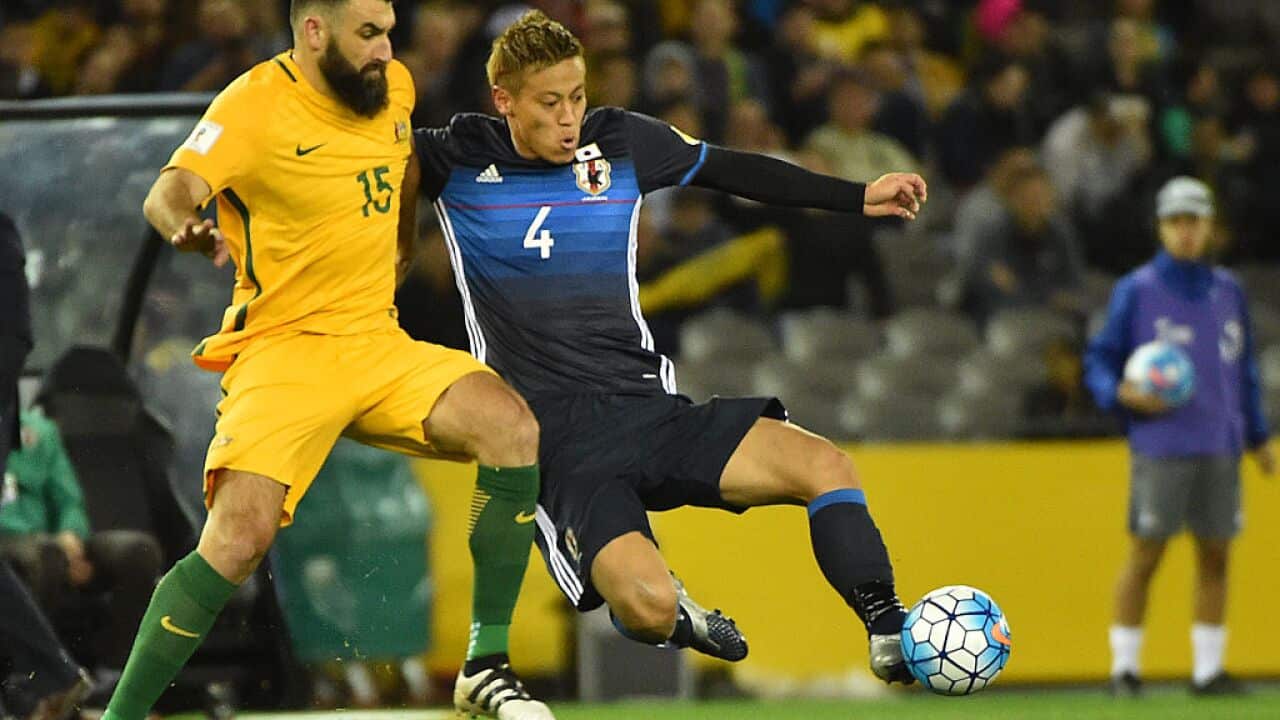 Jedinak fights for the ball with Keisuke Honda. Source: AFP

While they still have six qualifying matches left to play, the result isn't a positive one for the Socceroos as Saudi Arabia's win over United Arab Emirates sees Ange Postecoglou's men drop to second in the group.

Advertisement
Starting in a somewhat unfamiliar 4-4-2 diamond formation with strikers Tomi Juric and Apostolos Giannou up front, Australia failed to get their desired start as they began with an unconfident display.

Japan midfielder Genki Haraguchi opened the scoring in only the fifth minute, slicing past the Socceroos defence after picking up a beautifully timed Keisuke Honda pass just outside the box before perfectly placing the ball past Mat Ryan into the back of the net.

While the Socceroos had their half-chances, with Juric coming close with a couple of headers, the Japanese defence was stifling any indication of an Australian attack.

The striker was involved when Australia finally got off the mark in the 52nd minute, being taken down in the box setting up Jedinak for a chance to equalise from the penalty spot which the captain powered past keeper Shusaki Nishikawa.

Ange Postecoglou introduced Tim Cahill in the 69th minute while Robbie Kruse and Mathew Leckie also took to the pitch in the familiar 4-3-3 formation in the hopes of freshening up the attack.

All eyes were on the Cahill as he sought to improve on his record of five goals in eight matches against the Blue Samurai in the 88th minute, as Massimo Luongo lined up a free kick from 30 metres out to the right of the box.

The Queens Park Rangers midfielder lofted the ball into the area but was instead met by Matthew Spiranovic who missed by only a fraction as the ball bounced across the top of the net in what would be the last real chance of the match for Australia.

Takuma Asano was unlucky not to connect shortly after on a Haraguchi cross with Ryan beaten with the game ultimately ending 1-1.