Australia's defensive weaknesses and how the UAE could exploit them

Australia face a crucial clash against the United Arab Emirates, but if they're to ensure victory they must address the weaknesses opponents have constantly exploited in this World Cup qualifying campaign. 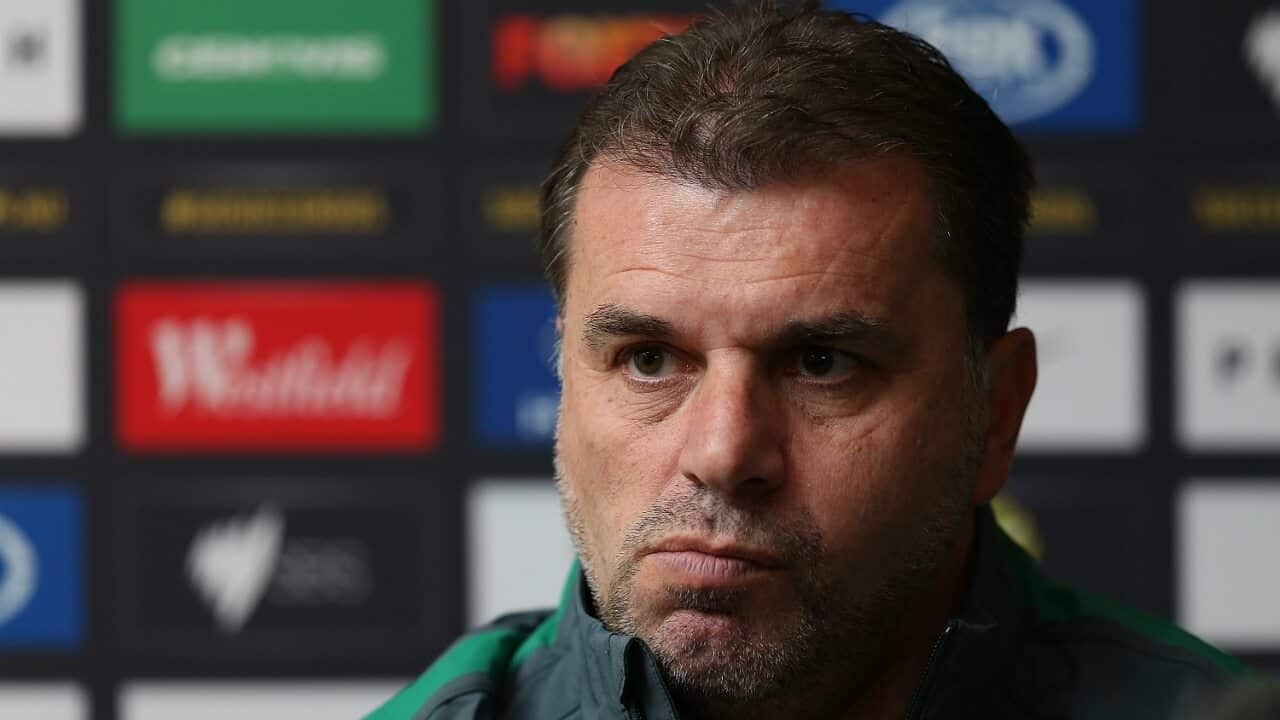 Socceroos coach Ange Postecoglou is under pressure ahead of the clash with UAE. Source: Getty Images

Analysing previous matches a worrying pattern emerges in the way teams have exposed the Socceroos.

Coach Ange Postecoglou has brought a welcome attacking style to the side. An emphasis on high-pressing, full-backs creating overlaps and a focus on maintaining possession.

However, as with every system, there are weak points.

Advertisement
If you send players forward that will give you a lot of passing options in attack but will mean you are vulnerable to the counter-attack.

If you protect against the counter-attack by having players stay in defensive positions you will have limited options going forward.

Here we look at those weak-points. This is not to say the system/tactics Postecoglou uses is wrong, just that it can and has been exposed.

Early diagonal high-ball in behind the full backs

When playing with a back four, Postecoglou likes his full-backs to push forward. It makes sense offensively, most of the top teams in the world do it.

It provides more options in attack and width to your play which stretches the opponent's defence - opening up more spaces in the middle where the majority of goals come from.

But, it means there is a lot of space in behind those full-backs when the team loses possession and an early pass can leave the two central defenders in a lot of trouble.

Diagonal balls over the top of a high defensive line

Even when not caught in possession, many of our opponents see the space behind our high defensive line as the best way to attack.

Here our back four remain quite compact and disciplined, but a lack of pressure on Saudi Arabia's midfielder means the Saudi attacker is able to get in behind and force Socceroos goalkeeper Mat Ryan into a great save.

Saudi Arabia wasn't the only team that saw this as a path to Australia's goal, Japan and the UAE have also used this strategy.

There is a good chance that the UAE will use a similar play (a midfielder dropping deep, playing a long diagonal ball to a wide player in an attempt to get behind Australia's defence) to attack Australia in Sydney tonight.

It was how their best chances were created the last time they played to Socceroos.

A change in formation

It is possible that Postecoglou's switch to a back three against Iraq was to counter this threat. Three central defenders to deal with the aerial passes, plus an extra defender to guard against a counter-attack. In theory, it made sense. In practice it was ineffective.

Australia's only wide players were Mathew Leckie and Robbie Kruse who, naturally attacking players, were caught high up the field. When Iraq won possession they would try and target the wings quickly.

The importance of winning the aerial challenge

"I know there was a lot of contested ball at the back that we should have won, particularly in the first half. It's more about where are our other bodies, where's the support, where are we tucked in. A couple of times we did let ourselves down on that. We'll have to address it,"
Mile Jedinak said after the Iraq match
.

With Bailey Wright, Mark Milligan and Milos Degenek as well as Mile Jedinak in support you would think Australia, traditionally strong in the air, would be able to deal with aerial contests. But this was not the case against Iraq and it led to their goal.

Australia must be aware of these long diagonal balls tonight, either in behind the defence or ones that result in aerial challenges.

They must put pressure on UAE playmaker Omar Abdulrahman (easier said than done) to ensure he does not have the time to play these dangerous passes. It's imperative they win the aerial challenges to ensure that their defence is not stretched out of position like it was against Iraq.

These are not the only ways teams have created chances and goals against the Socceroos.

Another common pattern is putting pressure on the central midfielders, winning the ball and then quickly attacking the space in between the full backs and the central defenders, which is harder against a back three.

But what is shown above is what has been the most common route to goal by Australia's Asian opponents.

Postecoglou's attacking style should be encouraged, but like every system, the team needs to have the correct balance if they are to win this crucial match against the UAE.