Bahrain Victorious is at the centre of an investigation into possible doping allegations with French police raiding the WorldTour team’s hotel ahead of Stage 18 of the Tour de France. 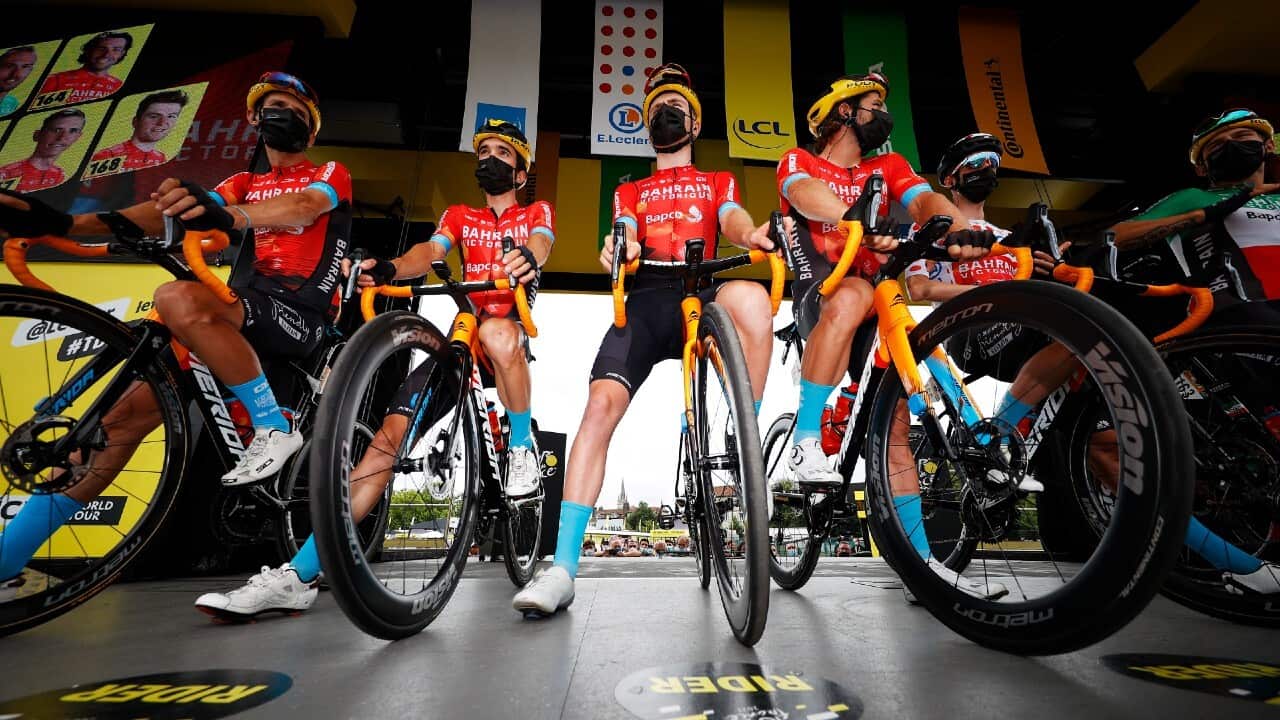 Bahrain Victorious have been named in an investigation by French police into allegations of doping Source: Getty Images

On Wednesday night, after Stage 17 of the Tour de France, French police raided the team hotel and vehicles of Bahrain Victorious with reports stating as many as 50 officers were at the scene until around 2 am local time in Pau.

A statement by Marseille police revealed they had opened an investigation on July 3 into the possible “acquisition, transportation, possession and importing of a banned substance or method for use by members of Team Bahrain Victorious, currently in action at the 2021 Tour de France”.

"The preliminary investigation is continuing to determine the reality or not of the offences that justified its initiation,” the statement reads.

Advertisement
“The existence of this investigation and the operations carried out do not in any way predict the existence of criminal offences. Anyone suspected or prosecuted is presumed innocent until proven guilty.”

Bahrain Victorious team boss Milan Erzen played down the situation and insisted it would not stop their involvement in this year’s Tour de France.

“Nothing special, we have a visit from the police, they ask for riders training files, they check bus and that’s it," Erzen said.

"They disturb riders for one hour and at the end, they said thank you. They didn’t tell us what’s the reason for the visit, but we will found this out today through lawyers."

Bahrain Victorious took to the start line for the ascent of Luiz Ardiden on stage 18, with rider Matej Mohoric speaking to media about the police raid on their accommodation.

“We arrived super late at the hotel, at like 9pm, and the hotel was full of police immediately after,” said Mohoric, winner of Stage 7 of the 2021 Tour de France.

“There were like 50 of them. They talked to everyone. They didn’t ask questions, they went through our belongings, our personal stuff, the buses, the trucks. They took some riders’ phones, some riders’ computers.

Mohoric, 26, went on to talk of a complete absence of doping at the top level of the sport, as a younger rider not having been around in the days of systematic doping within teams that permeated the sport particularly in the 90s and 00s.

“It feels a little bit weird; as a rider, I have never experienced or been close to doping whatsoever. I don’t feel uncomfortable that they went through all my stuff because I have nothing to hide. I don’t care,” Mohoric said.“I still find it a bit weird that even in the year 2021 they still believe we are doing something illegal.”