Crowd trouble forced an early end to the Ligue 1 clash between Bastia and Lyon after ugly scenes at the Stade Armand Cesari. 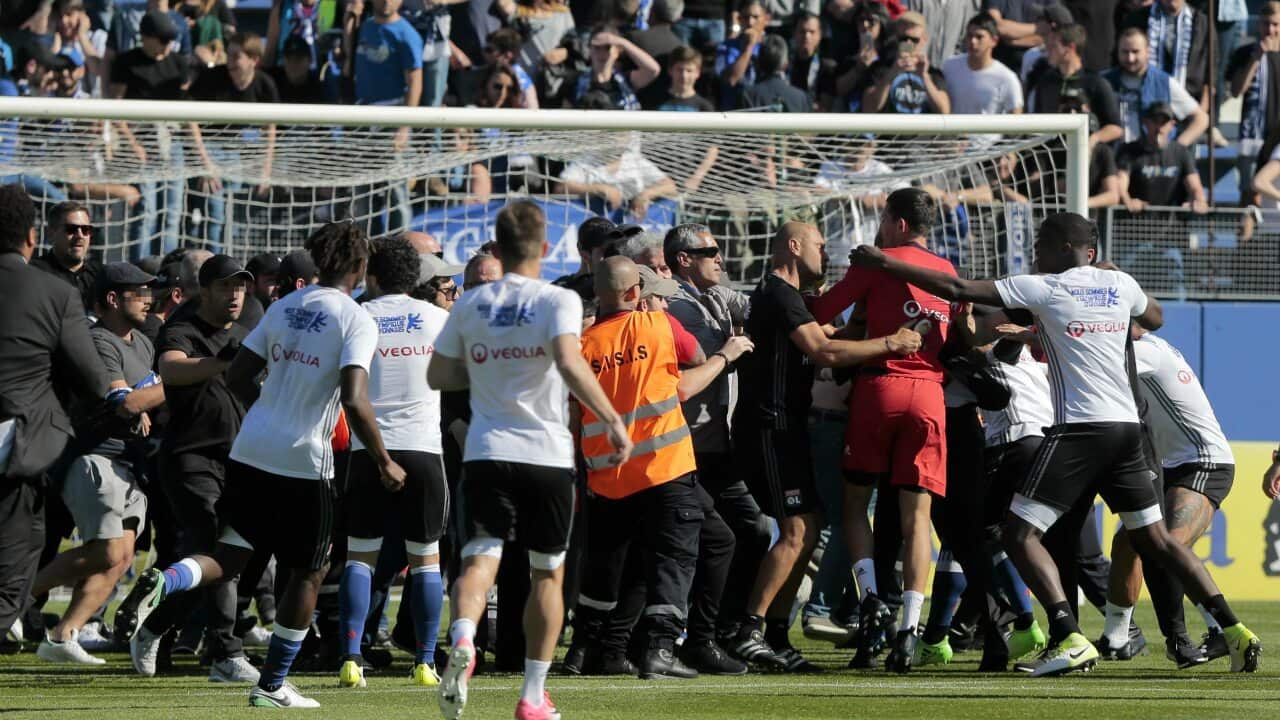 Bastia fans get on the pitch before the game Source: Getty Images

Videos online appeared to show the home fans entering the pitch to 'attack' visiting players before the game, and further trouble at half-time forced the game to be abandoned at 0-0.

Goalkeeper Anthony Lopes was caught up in the action, confronting three people - supposedly Bastia fans - on his way off the pitch before being escorted away as the melee continued.

The club account tweeted: "Once again there are scuffles after the whistle. Anthony Lopes has been taken to task by fans on the pitch."

Advertisement
At 1816BST, they added: "Official, #SCBOL will not return!!"

Lyon striker Alexandre Lacazette, who was not in the squad, tweeted: "Pfffff shameful! Nonsense!"


A statement from the French Football League (LFP) read: "Following the new incident at the end of the first period, the LFP decided to stop SC Bastia / Olympique Lyonnais.

"Following the very serious incidents that occurred during the warm-up, the DDSP (Departmental Director of Public Security) had indeed decided to play the game but to stop it at the slightest incident.

"The LFP condemns in the strongest possible terms the incidents which occurred before the match and at half-time of the match SC Bastia / Olympique Lyonnais."

The game had been in doubt after a delayed start of nearly an hour after the earlier confrontation, with Lyon tweeting that "Bastia fans had entered the pitch to attack the Lyon players who were finishing their warm-up."

"He and Memphis (Depay) started throwing them back... before a lot of Bastia supporters attacked them.

"The players all huddled together. They and the staff were all very shocked.

"None of them wanted to come back out of the changing room and play the match."

L'Equipe journalist Vincent Duluc was quoted on the OLTV account as saying: "Memphis was pushed by a supporter.

"Lots of them had been throwing balls at the players and they just started pushing them and then a fight broke out. I've never seen anything like it in 30 years."

There was little action of note in the 45 minutes played, with Lyon dominating possession but failing to trouble Jean-Louis Leca in the Bastia goal.

It is the second time in a week that Lyon have had a delayed start to a match, after last week's UEFA Europa League meeting with Besiktas started 45 minutes late as a result of visiting fans throwing projectiles and fireworks at the home supporters.


UEFA has opened disciplinary proceedings against Lyon and Besiktas and there will likely be a French league investigation into the latest events, with the LFP adding: "The LFP asked SC Bastia to take all necessary measures to allow stadium bans to be imposed on the individuals responsible for these actions."