Michael Matthews well and truly epitomised the Anzac spirit on Stage 5 of the Tour de France by taking out the most aggressive rider prize despite being diagnosed with two fractured ribs. 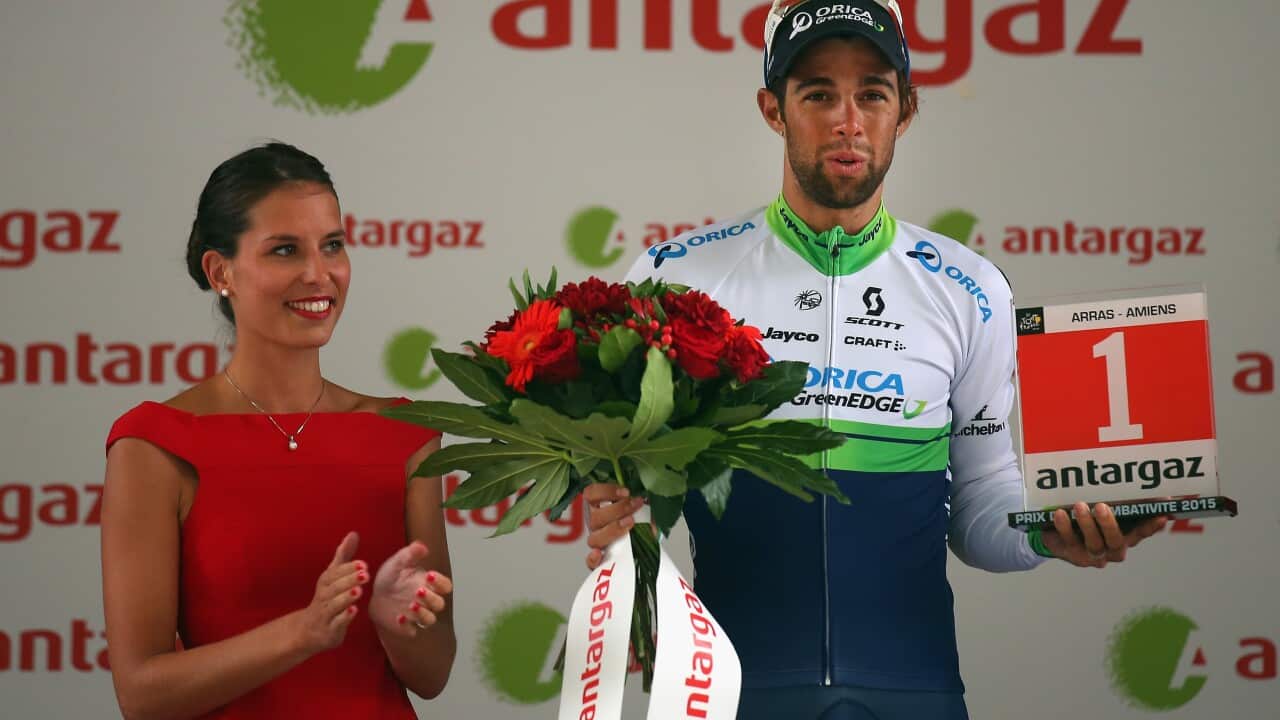 Michael Matthews accepts the most aggressive rider award for battling through the pain on Stage 5 (Getty) Source: Getty Images

Matthews spent much of the stage riding alone after being dropped in the wet and windy conditions - however, his desire to reach the Memorial National Australien in Villers-Bretonneux drove him on.

"My ribs are hurting more and more each day and the cobbles yesterday didn't help my situation either," said Matthews. "Going past the memorial for Australians really helped me finish.  There were a lot of times on the stage where I could have pulled the pin and jumped in the car, but these guys fouhgt and died for us so I thought I could do something by getting through the stage today."

Advertisement
The race organisers recognised Matthews' effort by awarding the Orica-GreenEDGE the most aggressive rider prize for the day.

"It's nice to have something at the end of the stage to make you feel a bit better after all the rain and crosswinds, especially riding half the stage by myself out the back. it's nice that people appreciate the effort when you do a ride like this."

Villers-Bretonneux is a key location on the Australian Remembrance Trail. The town was liberated during World War I from the Germans by Australian forces on 24 and 25 April 1918. The names of 10,773 Australian soldiers killed during the war are listed on the Memorial National Australien. Tour Down Under organisers also established an 'Australian Corner' in Villers-Bretonneux, where scores of Australian fans gathered to watch the race pass by.

All the Orica-GreenEDGE riders also rode with a black armband with the Australian Centenary logo to honour the Anzacs.

“Today was definitely a special day for our team,” sport director Matt White said. “It’s an honour for us to be able to make a tribute to those who sacrificed for our future. It was also a special feeling to pass by so many Aussie flags in the course, knowing how important this area is in our history and for everyone to really get behind it.

“For Michael Matthews to be recognised was a nice cap off.”

Matthews also holds the distinction of being the lanterne rouge, the last-placed rider in the Tour de France. Following the stage, scans revealed he is suffering from two small fractures to the ribcage. The team's medical staff have given clearance that it is perfectly safe to continue racing and Matthews has vowed to keep fighting. Teammate MIchael Albasini was not so lucky, however: he will not start tomorrow's stage after being involved in a crash during stage 5.

Nine Aussies remain in the race after Simon Gerrans' retirement on stage 3. Tinkoff-Saxo's Michael Rogers is best placed on GC, 8 minutes and 59 seconds behind race leader Tony Martin. Lotto-Soudal's Adam Hansen also remains in the race despite a dislocated collarbone as he continues his bid to break the record for the most consecutive Grand Tours completed. This Tour de France is his twelfth Grand Tour in a row.