EF Pro Cycling's Sergio Higuita is down to four team mates after three abandoned Paris-Nice overnight (AEDT), one crashing out and two pulling the pin because of coronavirus concerns. 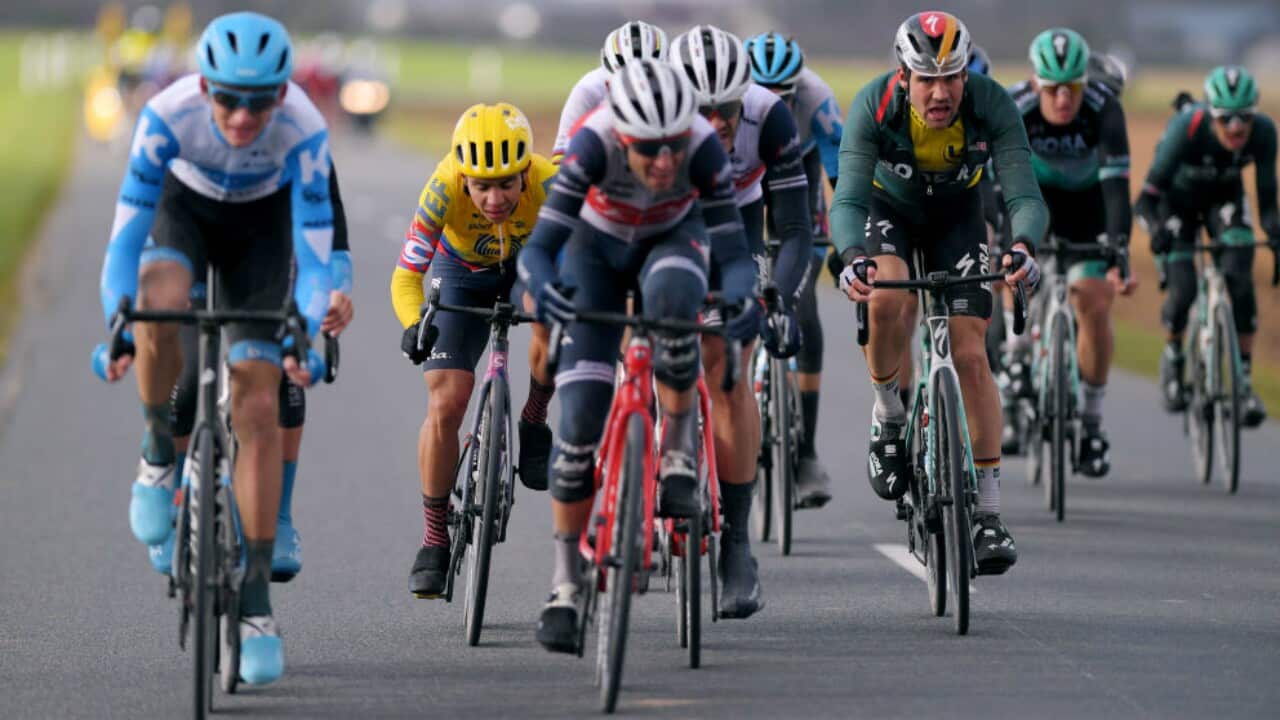 Lawson Craddock abandoned the race during Stage 5 due to illness, but it was later revealed race doctors had to determine if he met the criteria for coronavirus testing.

He did not - the American was cleared and free to leave the race.

EF Pro Cycling also lost Craddock's compatriot Tejay van Garderen who left Paris-Nice before the start of the fifth stage to make it back into the USA before President Trump's travel bans begin.

This leaves race favourite Sergio Higuita with just four team mates after Michael Woods also abandoned on Stage 5, his exit caused by a crash on a descent. The team confirmed the Canadian was taken to a hospital in Lyon following the crash and was scheduled for surgery overnight (CET) to repair his broken right femur.

But there are concerns in the peloton about whether the race will continue. The Italian Riders Association is also calling for the ASO, Paris-Nice organisers, to cancel the race.

"We hope that after today's stage, Paris-Nice is stopped," ACCPI president Cristian Salvato told
Cycling News
. "We're working so that the riders and team staff who are away from their families can return home as soon as possible."

"Italy has been in lockdown for several days and we're extremely worried about men and women racing internationally.

"Cycling is an international sport that involves people from all over the world. In this difficult moment in history, things have to stop, there's no other solution."

As the coronavirus outbreak spreads globally, the Spanish government has cancelled all sporting events that can't be staged behind closed doors, leaving Volta a Catalunya organisers with no option but to postpone the 100th anniversary ediiton.

"The race is suspended until a later date," organisers confirmed via a press release overnight. "We will ask the UCI for new dates later in the year, or failing that in 2021. The race has been held every year without fail since the end of the Spanish Civil War [in 1939]."

The Belgian government also ramped up efforts to stem the spread of the virus by cancelling racing until Friday 3 April including cobbled races, E3 Binckbank, Gent-Wevelgem and Dwars door Vlaanderen. While no decision has yet been made about the Tour of Flanders (Ronde van Vlaanderen), falling just two days after Friday 3 April, organisers have already cancelled the associated sportive for amateurs.

This latest news comes as the UAE Team Emirates confirmed Fernando Gaviria was one of the six positive coronavirus cases that stopped the UAE Tour in late February. Gaviria and his team are still in quarantine.

But the Colombian posted a video overnight (AEDT) to say he is on the mend.

Meanwhile Paris-Nice Stage 5 winner Italian Niccolo Bonifazio dedicated his victory as a 'small present for the people at home'.