Berisha v Maclaren: Whose golden boot will be most potent?

Melbourne Victory's Besart Berisha and Brisbane Roar's Jamie Maclaren shared the Golden Boot after scoring 19 goals apiece during the regular A-League season, but there is only going to be room for one of them in the grand final. 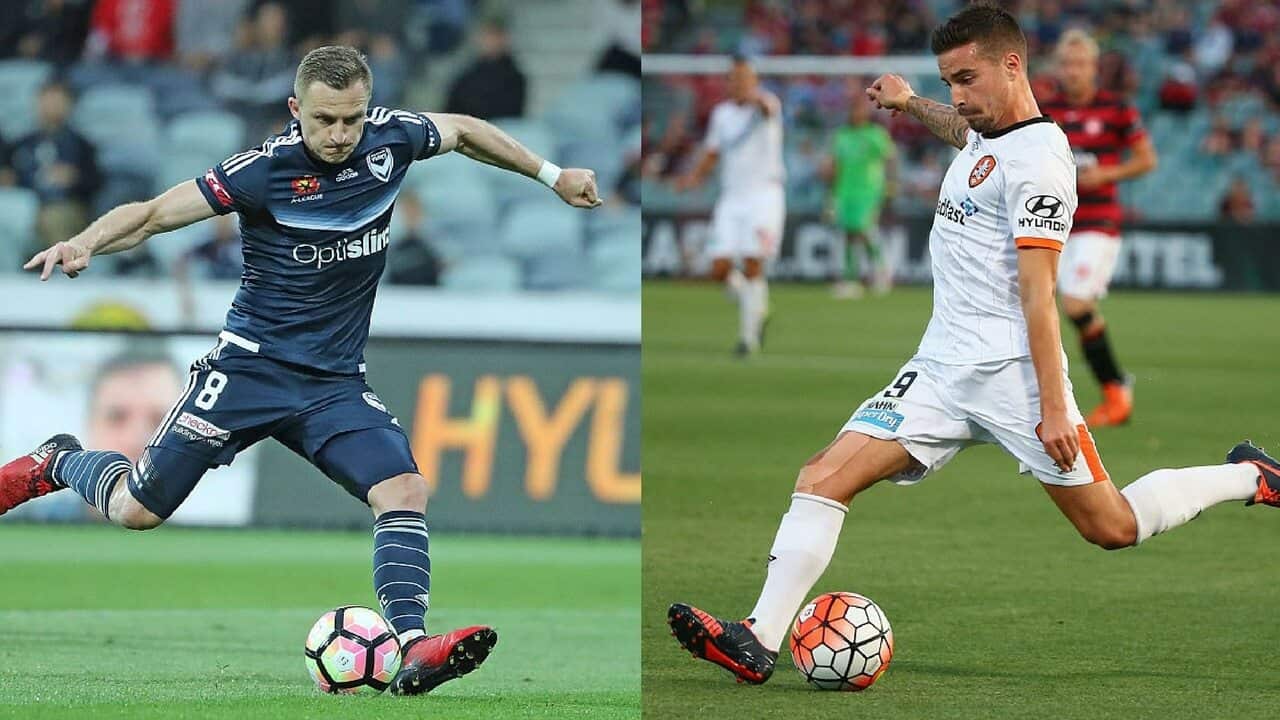 It is only fitting the two most productive strikers in the competition this season duel it out at some stage of the finals series.

That time will come in Sunday night's semi-final at AAMI Park, when Berisha's Victory take on Maclaren's Roar for a place in the grand final.

The chances of either team moving ahead to the biggest game of the year or going out in heartbreak could rest heavily on one brilliant shot - or one awful miss - by either man.

Advertisement
The World Game looks at what Berisha and Maclaren bring to the table.

Berisha: Became the first player to register 100 goals in the A-League when he scored in Victory's 1-0 win over Central Coast Mariners in the final round. That was important for an emotional player like him because it got the monkey off his back ahead of the finals. He did it in just 156 games.

His 19 goals this season have come from 66 shots, including 32 on target. He has five penalties and scored the other 14 all from inside the box. His "pens" have all naturally been right-footers, but apart from that he has scored eight off his right, three off his left and three with his head.

Maclaren: Took it up a notch late in the 2014-15 season, when he was promoted to starter at Perth Glory after mostly coming off the bench and scored four goals in his last two games for the club. Gone on to have two great seasons at Brisbane during which he has scored 40 goals in 52 games.

He has already moved to 20 goals for this season, having scored in the elimination final. Like Berisha, he has five penalties, plus 14 from shots inside the box and one from outside. He's a right-footer, but most of his open-play goals have come off his left (eight to six), with one from the head.

Berisha: Has it in spades. This is his sixth consecutive finals campaign (three each for Roar and Victory) and he has seven goals in finals. That includes four in three grand finals, all of which his team has won. Chasing down Archie Thompson's record 10 goals in finals.

Maclaren: At 23 he's eight years younger than Berisha and well behind him on the finals experience front, but has immediately shown a liking for the big end-of-season games. Has played three of them now, all for Roar, and scored three goals. Not scared to try to be the man.

Berisha: Part of an attacking triumvirate that also features James Troisi out of midfield and Marco Rojas on the wing. Troisi has six goal assists and Rojas 11. Berisha himself has four. But the service to him might be better if Troisi didn't waste so many shots (87, including 23 on target and six goals).

Maclaren: Has taken a lot more shots (93, including 52 on target) than Berisha, indicating his status as the clear go-to man in the front line. He has four times as many goals as Roar's second-highest scorer (Brett Holman, five). Thomas Broich and Tommy Oar are among those who have fed him well.

Berisha: Victory had gone three straight games without a goal before he scored their only goal in the last round. He's a proven big-game player, but their attack has got to lift overall and get him enough decent ball or he won't be a factor.

Maclaren: Nine goals in his last seven games. Missed a penalty in the last-round win over Wellington Phoenix, but then nailed one in the elimination final penalty shootout against Wanderers, which shows his strength of mind at present.