Egan Bernal (INEOS Grenadiers) confirmed himself as the top climber in the 2021 Giro d'Italia, kicking clear of Simon Yates (Team BikeExchange) in the final 500 metres to take fourth on the stage and increase his advantage on the general classification. 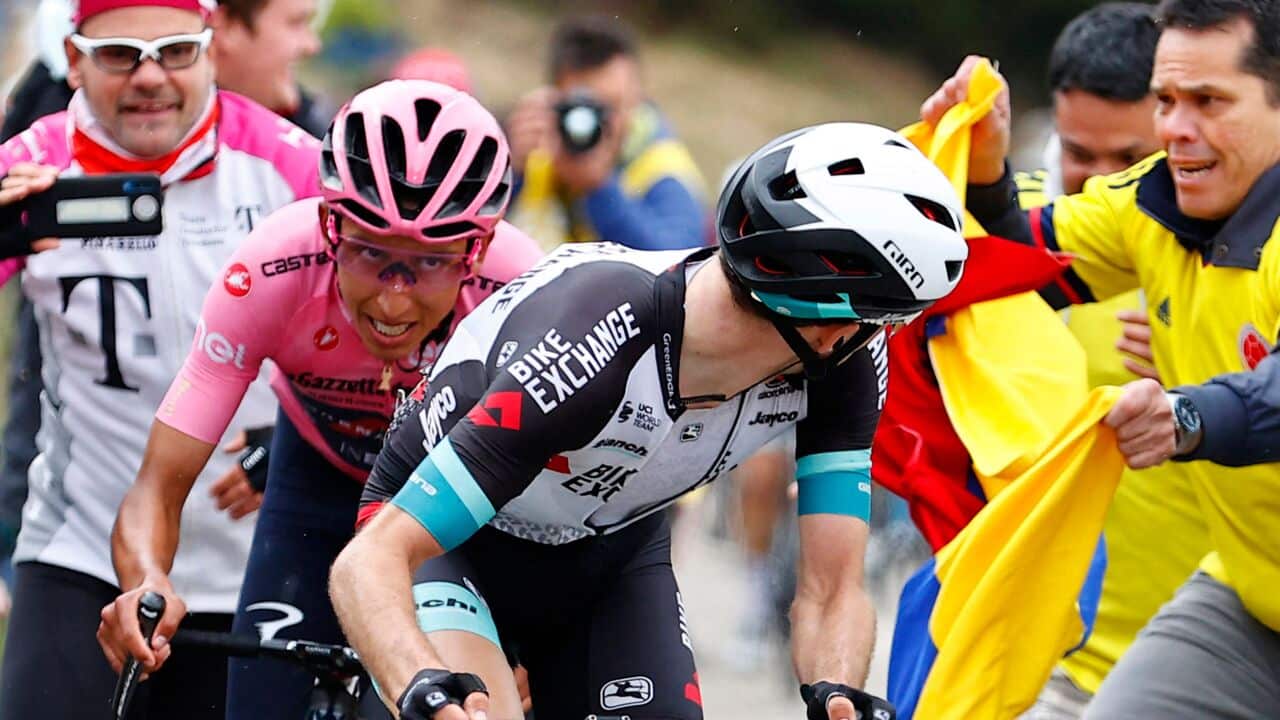 Simon Yates and Egan Bernal on the final kilometres of the Monte Zoncolan. Source: Getty

Simon Yates (Team BikeExchange) had been keeping his powder dry in the early key stages of the race, but he showed his cards on the Zoncolan as he attacked with two kilometres remaining, splitting the group completely as Hugh Carthy (EF Education-Nippo), Damiano Caruso (Bahrain Victorious), Emanuel Buchmann (BORA-hansgrohe) and Alexsandr Vlasov (Astana-Premier Tech) were left scrambling in the wake of the move. Bernal was the only one to cover the acceleration and he continued to follow Yates as the British rider piled on the pressure.

Bernal unleashed his own attack over the top of Yates, surging clear. The Colombian finished 11 seconds ahead of Yates and put a lot more time into his other rivals for pink.

Bernal now leads the race overall by a minute and 33 seconds from Yates, who jumped three spots as Vlasov, Carthy and Caruso all fell down the standings.

"I'm happy because finally I've taken time on my closest rivals," said Bernal. "Vlasov was at less than a minute, now Yates is second but he's further back as well.

"I've continued in pink and it didn't rain and wasn't freezing cold, finally, so that was another good thing. I've never known another climb like it, that last part, in particular, was really hard."

“I just tried to be calm, because I am in a really good position now in GC and I don’t need to attack in every mountain stage, I need to be calm, I need to be patient. Finally, I followed Yates and tried to accelerate in the final and I think I did a good race.
"Astana were pulling really hard during the stage, I was thinking Vlasov would be good as it was a good climb for him. I was surprised they were pulling really hard, but in the final we had control of the race.
“It is a good gap [to Yates], but I need to be focused as anything can happen in the Giro. It look as though it may be enough time, but you never know so I need to be calm with the gap.”

Yates put in his best showing of the race, attacking clear of the group of favourites left after the gruelling pace set by INEOS Grenadiers for the majority of the climb. He also mentioned that there may have been hidden reasons for his muted performance in the first few weeks of the race.

"Bernal showed he's the man to beat. It will be difficult to beat him but we'll keep trying," said Yates." I mean, I won't go into detail but it wasn't the best of first weeks. But now I'm feeling much better. Onwards and upwards."

"I hope to have the same legs as I had today for the rest of the race now and hopefully, we can try something and try to take the jersey."

Astana-Premier Tech were very active on the run into the Monte Zoncolan, taking up responsibility for the pace-making and even trying to split the race open on the descent from the Monte Rest, a move that was neutralised well before it could have too much effect.

Vlasov couldn't quite follow the attack of Yates, and then admitted he went a bit too deep in attempting to chase, blowing up in the final kilometre.

“In the end, I don’t know what happened, but I didn’t have the legs,” said Vlasov. “The team was good and we tried, but it went the way it went.”

“On the final climb I gave all I had. The team worked perfectly today and I felt good enough, but when Bernal and Yates attacked, I tried to follow them and maybe went a bit too deep at the final kilometre.”

“The Giro isn’t finished yet. There’s still a week and we have to do our best.”

Evenepoel came out from the GC contenders as the biggest loser, shipping a minute and a half on the race leader and dropping a spot down the leaderboard to eighth overall.

"When we got to that hardest part, I felt my legs weren't able to respond," said Evenepoel. "Things are getting tougher for me. When the power's no longer there, it's no longer there. It was also quite cold at the top, so that was a big change in temperature. Maybe my body is not 100 per cent ready for that."

"I'm still in the top 10, even if I have lost time and I'll try to stay up there. But if my teammates like João [Almeida] want to go in a break, that's fine."