Bettiol brilliant from the break to win Giro Stage 18 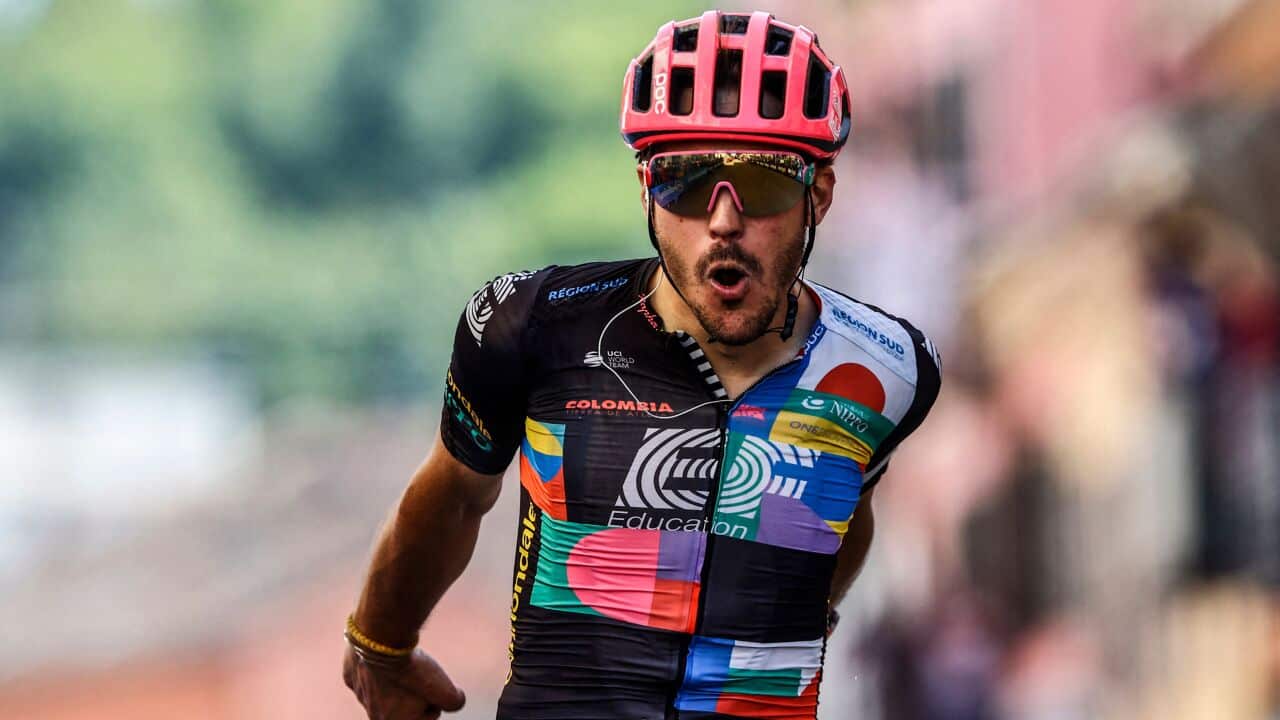 Alberto Bettiol (EF Education-Nippo) celebrates as he crosses the finish line to win the 18th stage of the Giro d'Italia. Source: Getty

It was the longest stage of the race, and at 231 kilometres, the teams of the sprinters and puncheurs weren't too keen to chase all day. A large break made its way off the front of the peloton, with 23 riders set to contest the day's prizes.

With the peloton content to just let the break get further and further in front, eventually finishing over 23 minutes behind the winner, there was little impetus to hold off the main bunch and instead the race became all about the inter-fighting for the stage victory.

Bettiol was part of an initial six-rider move that went clear of the break on the first of the four final climbs but he, like the rest of the breakaway, was caught out when that attack was caught and Remi Cavagna (Deceuninck-Quickstep) made a formidable acceleration with 26 kilometres to go.

Advertisement
Cavagna quickly pushed his advantage to over 30 seconds as he flew through the corners and left the pursuers wondering if they had let the race get away from them.

Bettiol and Nicholas Roche (Team DSM) jumped from the group in pursuit of Cavagna, trying to follow with 25km to go and then again with  15 kilometres remaining.

Cavagna's lead had fluctuated between 15 to 30 seconds with the French national time trial champion's prowess in the discipline coming to the fore on the flat sections of the course.

At the foot of the final climb, Cavagna held a 15-second gap and it was clear that the catch would likely have to be made on the last ascent. Bettiol launched an attack, dropping Roche and grinding his way up to a visibly struggling Cavagna, briefly staying with the Frenchman before dropping him just before the top of the climb.

From there, it was a descent and a short, flat run to the line, with Bettiol delivering a solo victory in Stradella.

Simone Consonni (Cofidis) emerged from the remnants of the breakaway to overhaul a tiring Roche and take second on the day, with Cavagna finishing in ninth after animating the race.

“It’s really special to win a stage like this. It feels like the Tour of Flanders years ago,” said Bettiol. “The team was in good spirit and today I had this great opportunity to go into the breakaway and try for the win. It means a lot for me, my team, and for the people that always believe in me."

The 27-year-old paid tribute to his deceased former agent, Mauro Battaglini, and the
Mottarone cable car accident victims
, the May 23 tragedy that saw the loss of 14 lives that has seen Stage 19 of the Giro d'Italia rerouted.

Bettiol has been one of the key domestiques for EF Education-Nippo leader Hugh Carthy on recent stages, with the Italian shepherding the fifth-placed rider overall all the way up the Sega di Ala on Stage 17, on a rare bad day for the British rider.

“We will enjoy the victory for a few hours and then we will focus on Hugh,” said Bettiol, already looking ahead to the next two days in the mountains.

Race leader Egan Bernal (INEOS Grenadiers) had a quiet day, finishing in the main bunch 23 minutes down, with no major action in the fight for the leader's pink jersey.