Strikers are obviously always important but rarely have the men up front appeared as critical to the outcomes of A-League finals games as Bruno Fornaroli, Bruce Djite, Jamie Maclaren and Brendon Santalab do this weekend. Brisbane Roar striker Jamie Maclaren will take an extraordinary goalscoring record against Western Sydney Wanderers into the A-League semi-final at Pirtek Stadium on Sunday. 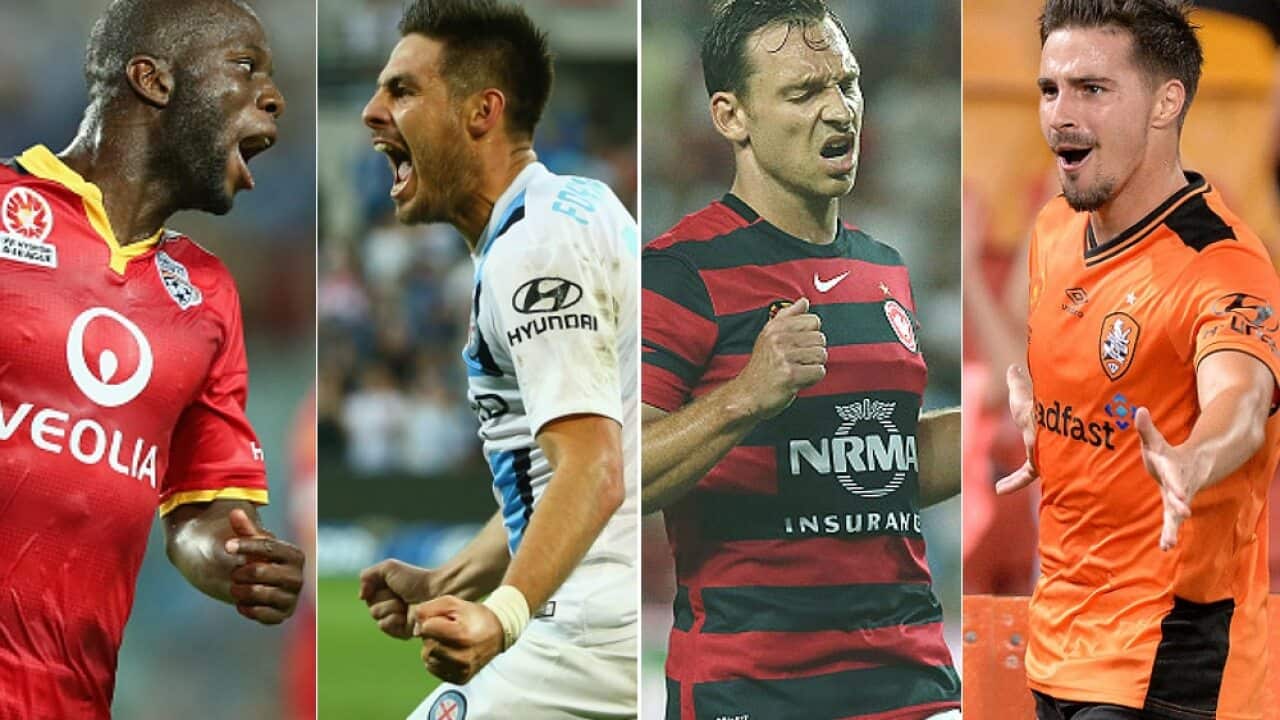 Advertisement
Adelaide United and Melbourne City will meet in the first of the semi-finals at a sold out Coopers Stadium on Friday night before Western Sydney Wanderers host Brisbane Roar on Sunday at Pirtek Stadium, with just a few hundred tickets left to be snapped up.

The World Game examines how all four strikers are placed going into the biggest weekend of the season so far.

Djite has never been a heavy goalscorer but he brought so much to the table in other areas, with his strength and ability to hold the ball up, that he inevitably still made a contribution.

But now, the way Adelaide are playing, Djite's style has also evolved. He is now having the ball delivered in front of him much more often - and much closer to the box - rather than too often having to play with his back to goal and well away from goal.

He's still got the strength and the ability to protect possession but the big difference now is goals - and plenty of them.

Djite was in a goalscoring drought that stretched back to last season before he scored in a 4-1 win over Brisbane in Round 16. Since then, the goals have come regularly and he has nine for the season. Most importantly, he is red-hot right now, having scored four goals in his last three outings.

Adelaide have a host of goalscoring options, which makes them very difficult to shut out and Djite scoring regularly from the top of the attack completes the overall package.

What more needs to be said about him? He has gone from strength to strength but he might need to find an even higher level if he is to get the better of Adelaide's defence.

Adelaide had clearly the best defence in the regular season, conceding just 28 goals, and 14 of those came in a four-game stretch from round three to six. It's going to make for fascinating viewing to watch Fornaroli try to break them down and the Reds try to keep him out.

Fornaroli smashed the A-League goalscoring record with 23 in the regular season and then he came up with two stunning goals in City's 2-0 elimination final win over Perth Glory - a bicycle kick and a stunning free-kick.


The vast majority of his goals have come from his right foot but he has also put a few away with his left foot and the head - with the majority of the highest quality.

If there is not a clear shot on for him, Fornaroli will use his excellent technical ability to move the ball one way, then the other, and back again if he must, to try to open up a window. He is fabulous to watch and lethal when he has a sight on the target.

It could be a coincidence, or it might be that the Western Sydney defence genuinely struggles to handle him, but Maclaren has scored in each of the past four games he has played against the Wanderers - for two different clubs.

The run began in the final round of last season, when he got a goal in a 2-1 win by Perth at Pirtek. That turned out to be Maclaren's last game for the Glory.

This season, Maclaren played in all three games for Brisbane against Wanderers and came up with five goals, including three at Pirtek. He scored twice in Roar's 3-1 away win, once in a 2-1 away loss and twice in a 3-2 home win.

Maclaren didn't have the impact he would have liked in Brisbane's elimination final against Melbourne Victory last Friday night, but Roar won and he lives to fight again.

His anticipation is so good that he escapes the attention of defenders and it doesn't matter where he is or what sort of angle he's on when he gets the ball, he's a goalscoring threat.

Eight of Maclaren's 18 goals this season have come off his right foot and 10 off his left.

Right now, 'Santa' thinks he is going to score if he gets something just remotely resembling half a chance. That is the confidence a striker develops when he goes on the sort of run Santalab is on.

He isn't up there for goals scored this season with Fornaroli (25), Victory's Besart Berisha (18) and Maclaren, but his circumstances have been vastly different.

Santalab has played less games than each of those other key strikers in the finals series and, more importantly, he has had considerably less game time because he has mostly come off the bench.

Wanderers coach Tony Popovic knew he could count on Santalab to score crucial goals as a substitute, but late in the regular season the goals dried up for his starters and he reacted by elevating Santalab to the starting XI.

Santalab responded by scoring doubles in back-to-back wins over Central Coast Mariners and Wellington Phoenix in the last two rounds, results that clinched a top-two spot for the Wanderers.

He has 10 goals for the season to be his side's equal leading goalscorer - no mean feat for a player that started just three games.