Pello Bilbao dedicated a dramatic Stage 4 win at the Tour of the Alps to Michele Scarponi, who passed away four years ago to the day. 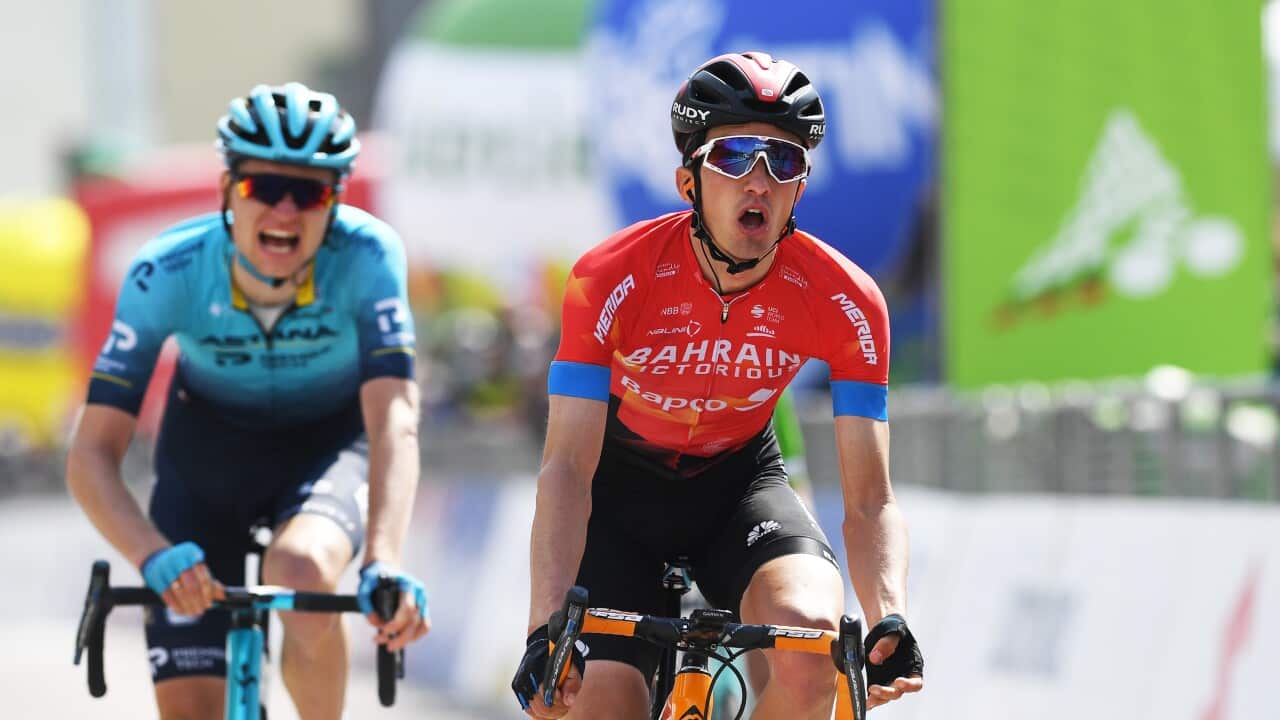 Pello Bilbao of Bahrain Victorious took the win on the queen stage of the Tour of the Alps. Source: Getty

The queen stage saw the best climbers come to the fore and again it was race leader Simon Yates (Team BikeExchange) who went clear on the final climb of the Castel Condino with only Alexandr Vlasov (Astana-Premier Tech) for company.

The pair worked to establish their lead at the top of the climb ahead of the rest of the elite climbers of the peloton, with only the seven-kilometre descent to the finish in Pieve di Bono remaining. Bilbao flew across the gap to the leading pair on the descent, attacked and then had just enough to win the stage in a sprint ahead of Vlasov with Yates in third.

Yates extended his race lead, which had previously sat at 45 seconds to Pavel Sivakov, to 58 seconds over new second-place Bilbao.

Advertisement
"Today was a special day," said Bilbao. "I want to have this victory – I knew it was a perfect finish for me. Also, losing some seconds in the top, I was convinced that I could go back in the front group."

Bilbao dedicated his victory to Michele Scarponi, his former teammate at Astana who died four years ago today.

"These descents are not ones to do every day," said Bilbao. "It's not possible to take these risks every day, but today was a special day – I want to dedicate this victory to Scarpa, to Michele, so I gave it everything."

"Before coming to this race, I was already thinking that it's a perfect race for the spectators – also for me. I love these kinds of stages where it's not just about legs – you can play cards in a different way like yesterday. It's a race I really enjoy. I like to play in these kinds of races."

Earlier in the day, it was Larry Warbasse (AG2R Citroën) who established the early breakaway after some initial attempts had been brought back, taking Chris Froome (Israel Start-Up Nation) with him and kicking off what would be the day's main escape.

Team BikeExchange took charge of the chase for race leader Simon Yates, and the break was never given much leeway. Their time out front came to an end at 18 kilometres to go, with BikeExchange continuing to push on to the bottom of the Castel Condino climb soon after.

INEOS Grenadiers took over as the slopes began to pitch upwards in earnest, steadily filing down the peloton until 15 riders remained with the final 5 kilometres of the climb plus the descent to the finish line to come.

Hugh Carthy (EF-Nippo) kicked off the attacking, with the top riders scrambling to respond. Sivakov - second on the general classification - was surprisingly one of the first dropped, with teammate Dani Martinez waiting for him to nurse him up the climb as Yates led the chase behind Carthy.

Yates put on the pressure in the final three kilometres of the climb, pushing on after an attack from Vlasov. Only the Russian and Martin could go with him as Quintana and Carthy gave chase.

Martin was detached at the front 2.5 kilometres from the top, leaving Vlasov and Yates out front. The pair summited the climb eight seconds up on Martin, and the Irish rider crashed on the technical descent as Bilbap flew down in pursuit of the leaders. Hindley also crashed, finishing well back in 18th on the day despite climbing well.

Bilbao joined the leaders and immediately went to the front and opened up gaps on the run to the line, putting both Yates and Vlasov under pressure. They chased back on, but Bilbao was the freshest rider and sprinted to the win ahead of Vlasov and Yates, who are now the top three riders on the general classification as well.