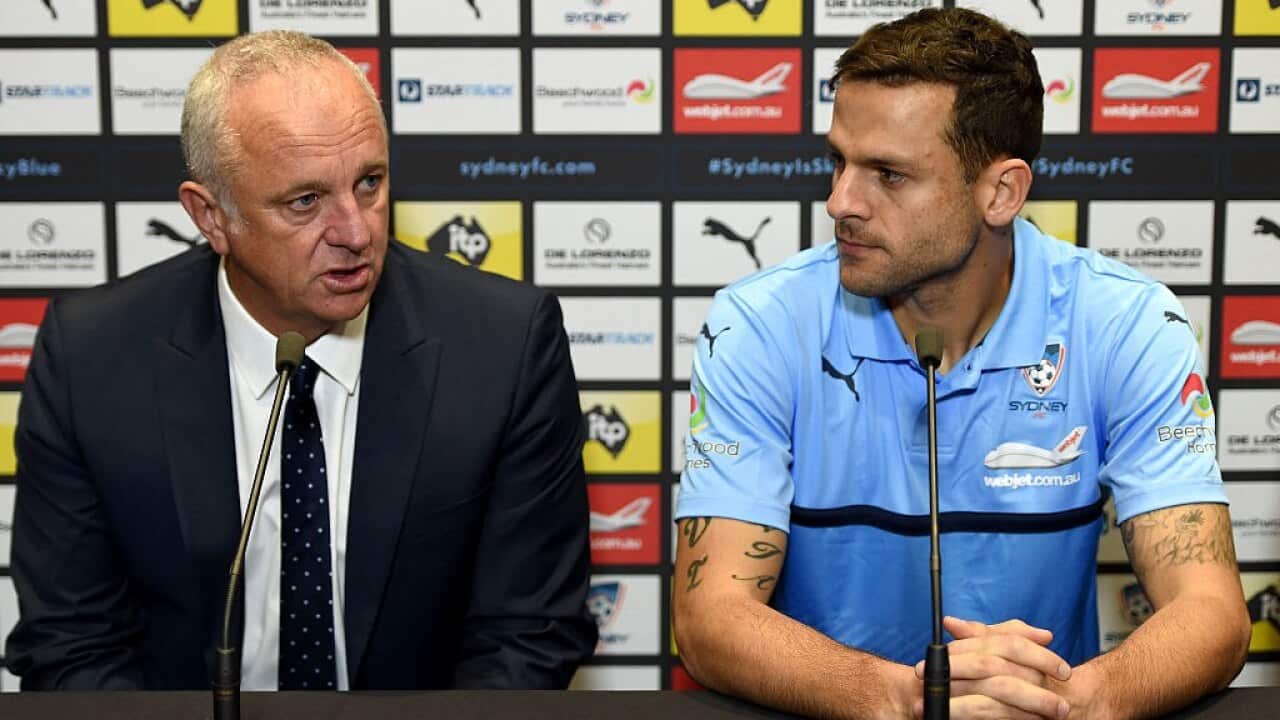 The Brazilian forward’s signature was only formalised last week, making this his first official match in Sky Blue after joining the club from Brazilian side Gremio.

Arnold will wait until kick-off before deciding whether to play the former Besiktas and Kayserispor striker but is confident he’ll make a difference whenever he takes to the field.

“Everyone is good, only Bernie Ibini is not travelling. We'll take an extra player but everyone is fit. Bobô is settling in very well and we expect him to play tomorrow night,” Arnold said “He's a player with a fantastic pedigree and great CV. He's a fantastic, he's fitted in perfectly. So we're expecting big things from Bobo and I'm sure he'll deliver."

Brosque is more likely to come on at some stage in the second half as he recovers from a debilitating hamstring injury that ruined his last season.

“‘Brosquey’ has worked extremely hard in the off-season to get fit. We had to wait until we got the all-clear from the medical staff and from the doctors,” Arnold said. “But he has looked great at training. He came on against Brisbane and set up the winning goal and it's great to have him back.

“His absence last year showed how important he is to the team and to the club and I know he's a fan favourite at Sydney FC. He's Sky Blue through and through and it's fantastic to have our leader back.”

The club’s all-time leading scorer says he’ll play “some part” in the match as he continues his long road to recovery.

“It will depend on how the game is going. Obviously we need to factor in extra time as well, which is an extra half an hour,” he said. “But the body is feeling good, the legs are feeling good, so whatever part 'Arnie' feels I can play will be good for me.”

The striker has been putting in ample work behind the scenes to make sure he’s back to full fitness in time for round one in October.

“I've put in a lot, obviously. When the boys went away I had an extra three weeks of work to make sure the hamstring was ready to go. Now it feels quite good,” he said. “I had a minor setback early on but it's been feeling great ever since and I've had a couple of games where I've come off the bench and felt good as well.

“Now it's about improving my fitness, getting more game time and enjoying being back out on the park again.”

The 32-year old said he didn’t enjoy being a spectator last season, fuelling his motivation to have an impact this time around.

“I want to play more of a part in the team than I did last year. Especially in the harder times last year, when we weren't winning, it was tough to sit back and not be able to do much,” he said. “I really look back on last year [with disappointment] and I hope I'm a lot more involved this year. With the players we've brought in, I think that's definitely the case, so I'm looking forward to being amongst all that.”

Arnold said the team had come on strongly since the 3-0 FFA Cup win over the Wollongong Wolves and last week’s 2-1 friendly against Brisbane Roar on the Gold Coast.

“It's three weeks ago now that we played Wollongong and we're three weeks further down the track fitness-wise,” he said. “Our performance against Brisbane was very good and I think we've improved even more since then. It's a step-by-step process, the boys are getting fitter and stronger and the new boys are settling in very well and therefore, we'll get better as a team.”

After failing to make the finals last year, Arnold said he wanted his team to be in the running for every trophy this season, starting with the FFA Cup.

“It's hugely important. There's a trophy on the line and we want to be challenging for all three trophies this year so it's a game we're looking forward to,” he said. “We've always had quite good success over there in Perth and it's going to be a tough game.”