Breakaway breakthrough for Kron on opening stage of Volta Catalunya

Andreas Kron (Lotto Soudal) escaped on the run into to finish and collected the biggest victory of his neo-professional career, outsprinting Luis Leon Sanchez (Astana-Premier Tech) to the line to win the opening stage of the Volta a Catalunya. 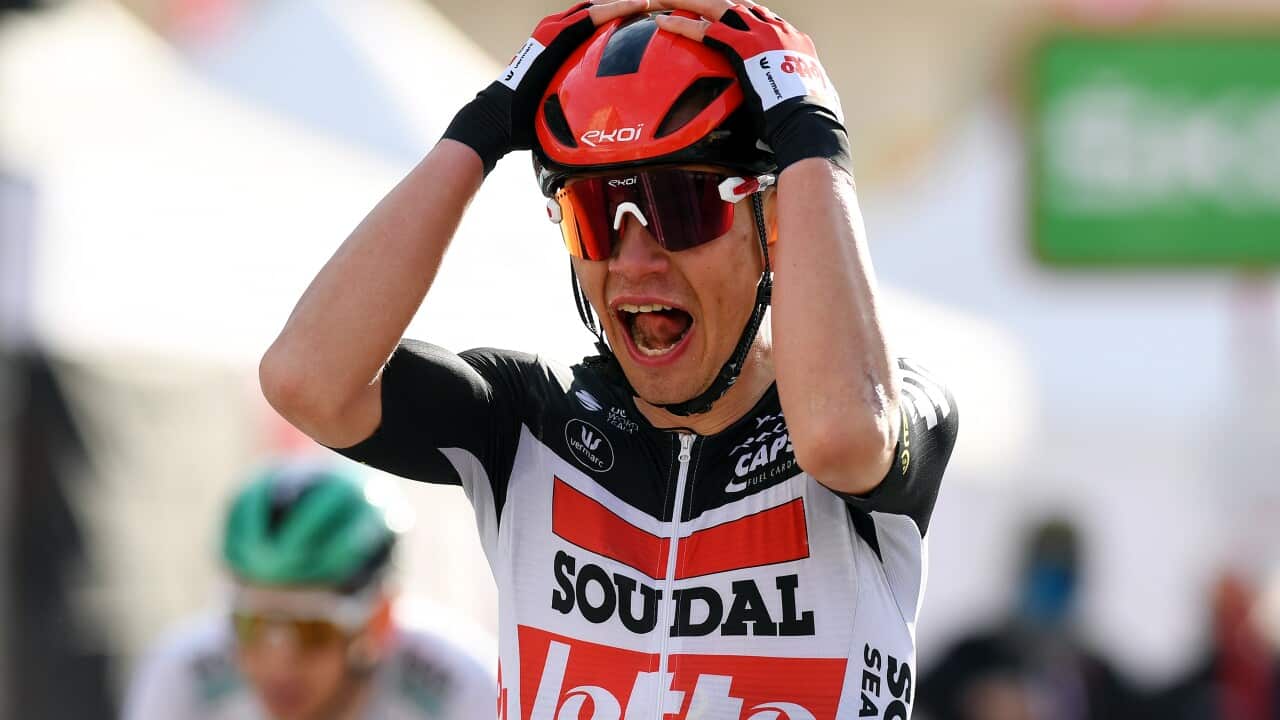 The decisive move jumped clear of the main bunch with 23km remaining, launched by Sanchez as he took advantage of a lack of cohesion in the reduced peloton. He was promptly joined by Kron, Rémy Rochas (Cofidis) and Lennard Kämna (BORA-Hansgrohe). The quartet worked well together to take advantage of the lack of organisation behind to build a maximum lead of 45 seconds in the run to the finish in Calella.

Although the gap was brought down in the final kilometres, the sustained chase effort came too late to deny the escapees. Kämna attacked with two kilometres remaining, but he was unable to shed himself of his companions and with the German the best hope for the general classification present he decided to make sure that the breakaway made the finish ahead of the peloton.

Advertisement
Kron took up the key position at the rear of the group and when he jumped he immediately was able to get a clear run at the line while Sanchez appeared a bit held up. The slight advantage was all the 22-year-old needed and he held on to the finish line to claim his maiden WorldTour victory.

“This is crazy, just fantastic”, said Kron. “Since I started cycling at the age of nine, I dreamt of winning a stage in a WorldTour race. This is the biggest scene of cycling.”

“In the Tour of Luxemburg last year I won by beating Diego Ulissi, so I knew I would have a chance today. I did my job in the front group, to stay ahead, but I kept in mind to save some forces. I started the sprint in ideal circumstances, in last position and well protected from the cross wind. It went perfect.”

With the win, Kron pulled on the leader's jersey on a day that saw Chris Froome (Israel Start-Up Nation) fall out of contention on the main climb of the day, finishing eight minutes and 40 seconds behind the stage winner. All the rest of the main contenders finished in the main bunch, led home for fifth by Dion Smith (Team BikeExchange) 26 seconds behind the lead riders.

It was a solid day for Australian contenders of the general classification, with Richie Porte (INEOS Grenadiers) easily returning from a puncture and most finishing in the main group, with only Alex Evans (Intermarché - Wanty - Gobert) and Rohan Dennis (INEOS Grenadiers) conceding time.

The opening parts of the stage was animated by Gotzon Martín (Euskaltel-Euskadi), Rein Taaramae (Intermarché-Wanty Gobert), Natnael Berhane (Cofidis) and Sylvain Moniquet (Lotto Soudal), who formed the early break in the opening kilometres and built a maximum lead of four minutes and 20 seconds over the peloton.

Bora-Hansgrohe, who have Peter Sagan in action in Catalonia this week, took early responsibility for the chase but once the race reached the Port de Santa Fe del Montseny, Movistar took over on the main climb of the day.

The pace forced a number of riders out of the back of the peloton as Richie Porte suffered then returned from his puncture and Froome dropped off the pace along with many others.

By that point, Moniquet was the only rider left in front in the break, with the Belgian holding off the peloton to the summit to claim the king of the mountains points at the top.

The peloton was fracturing at that stage and a number of moves tried to slip away, with the front end of the race breaking apart and reforming as attacks and counter-attacks flowed inside the final 30 kilometres. Geraint Thomas (INEOS Grenadiers), Fausto Masnada (Deceuninck-QuickStep) and Kenny Elissonde (Trek-Segafredo) were part of a group that opened a small gap with 26 kilometres to go, while Marc Soler (Movistar) and George Bennett (Jumbo-Visma) were also prominent, but the move was a bit too dangerous for most teams.

Sanchez sensed his opportunity with 23km to go, jumping clear with Kron, Kämna and Rochas for company and the quartet stayed clear to contest the win in Callela.