Broich gives the A-League's best players his seal of approval

Brisbane Roar's Thomas Broich is the only man to win the Johnny Warren Medal twice and as such is a good judge on just which players have lit up the A-League so far in season 11. 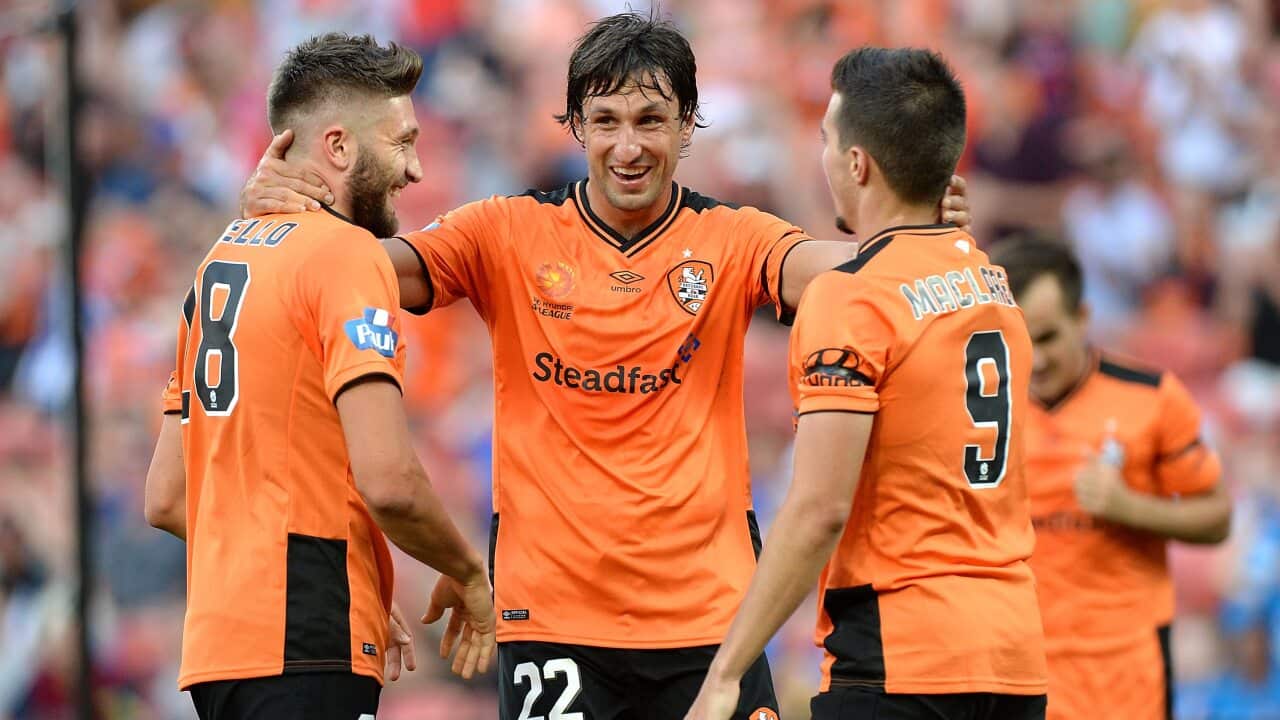 The 34 year-old also spoke to The World Game about Brisbane Roar, what he likes about the competition as a whole, why he is impressed by Aaron Mooy and the tricky question of what to do next after he eventually finishes playing.

TWG: Brisbane have gone draw, draw, loss in the last three rounds. What's good about Roar at the moment and what needs to improve?

Advertisement
TB: Last three weeks we only got two points, but if you look at each game then we were the better side and we should have taken all those points. Even in the loss against Wanderers last weekend we didn't concede many chances and we created a lot and we had good control of the game.

The previous week in Newcastle it was similar, we had the majority of the chances. We need to make sure we capitalise on those chances, but other than that I think our structure and the way we're going about things is pretty good.

Sometimes in football it doesn't always go your way in terms of the results, but it's always important how you perform and I think there are a lot of promising signs.

TWG: You're known as a left-sided player, but you spent most of the game against Wanderers on the right. Why?

TB: We all know that Henrique is pretty good on the left wing. He had a chance there last season when I was injured and did extremely well and scored eight goals during that time before he got injured himself, so we thought we might just give it a shot and I thought it worked quite well.

TWG: Are you comfortable on the right?

TB: It takes a bit more time to really get used to it, because obviously when I'm on the left I can come inside and I'm on my right foot and it's a whole different story coming from the right.

Taking into account it was the first time to link up with the boys on the right, it worked quite well. We controlled that side defensively and we had some promising situations going forward, so it's definitely something we can build on.

TWG: Do you expect that where you play from now on will be a week-to-week thing, depending on the opposition and other factors?

TB: There are many factors. Sometimes you've got to play to another player's strength as well and, like I said, Henrique is just electric in that position.

TWG: So it's just a matter of getting it done at the finishing end for Brisbane at the moment?

TB: Absolutely. We copped two goals against Wanderers, but really it wasn't that we were under the pump or anything, it was just a top-class finish from Mitch Nichols and we were just a bit unlucky with the goal in the first half.

They had a chance each half and they scored two, so we went back to Brisbane with zero points but you've got to look at the overall performance and we had many shots at goal and we played well. That's what we have to take away from the game and not just look at the result.

TWG: Nichols shrugged a defender off, moved inside and took the shot from the edge of the box. That's what you try to do, that's what a lot of players try to do in that position, but some do it better than others.

TB: It was beautiful to watch and that's what he can do, he's one of the best players in this league and sometimes these players punish you.

But, having said that, if we had put away our chances we could have taken at least a point and maybe three points and that's where we've been struggling the last few weeks. We scored one against City, one against Newcastle and one against Wanderers.

We're creating chances, but we're just not clinical enough. We need to improve that against Wellington (at Suncorp Stadium on Saturday).

TWG: Aaron Mooy is getting enormous publicity due to his form for Melbourne City. Are you impressed by him? Who else impresses you?

TB: Yeah, definitely he impresses me. It seems that he can't go wrong at the moment, like whenever he touches the ball it's just perfect. His timing and his vision are exceptional and it's a real pleasure to watch him.

But there are many others as well. I'm a big fan of Corona. He's so composed and has such a great passing range and he's doing a great job for us at Roar. We talked about Mitch Nichols as well. Almost every team in the league now has players who are really great to watch.

TWG: What about Roly Bonevacia for Wellington? He's been in great form as well.

Like I said, there are players of that sort of calibre in almost every team in the league now. You look at the playing standard and see the way Mariners want to play and Newcastle want to play, compared to how they played in the past.

There is very entertaining football and very good technical football, so it's actually quite a joy to watch all of the games in the A-League now.

TWG: So people aren't getting carried away about Mooy? You think he's as good as people say?

When things don't go your way, like with Filip Holosko for Sydney FC last weekend, you get hammered, but I think he did well to get into all of those positions and create goalscoring chances for himself.

All he needed was a bit of luck, so that's an example of someone who is not as bad as people make him out to be at the moment.

With Aaron Mooy, I don't want to take anything away from his performances, he's been outstanding, but I reckon he knows himself where he can still improve.

TWG: But in terms of who is playing the best football in the competition, he's right up there?

TB: Absolutely. He's arguably the best player at the moment. He's doing it week in, week out and looking very good.

TWG: How much longer are you looking at playing?

TB: I'm contracted for one more year after this season. At my age you just take it as it comes. I enjoy playing still and we're really developing a new team again, a different style of football, and it's a pleasure to be a part of that, but I don't know how my body is going to be feeling in a year's time.

I'll just take each day as it comes and see what the club wants to do at the appropriate time.

TWG: And do you see yourself moving back to Europe when you finish playing, or do you think you might stay here?

TB: That's a good question. When it comes to my career after football I'm really undecided. I change my mind so often, so many plans, so many ideas. I have no clue whatsoever what I'm going to do for sure at this stage.