There is a guessing game going on at Sydney FC heading into Saturday night's blockbuster against Western Sydney Wanderers and only coach Graham Arnold knows the truth. 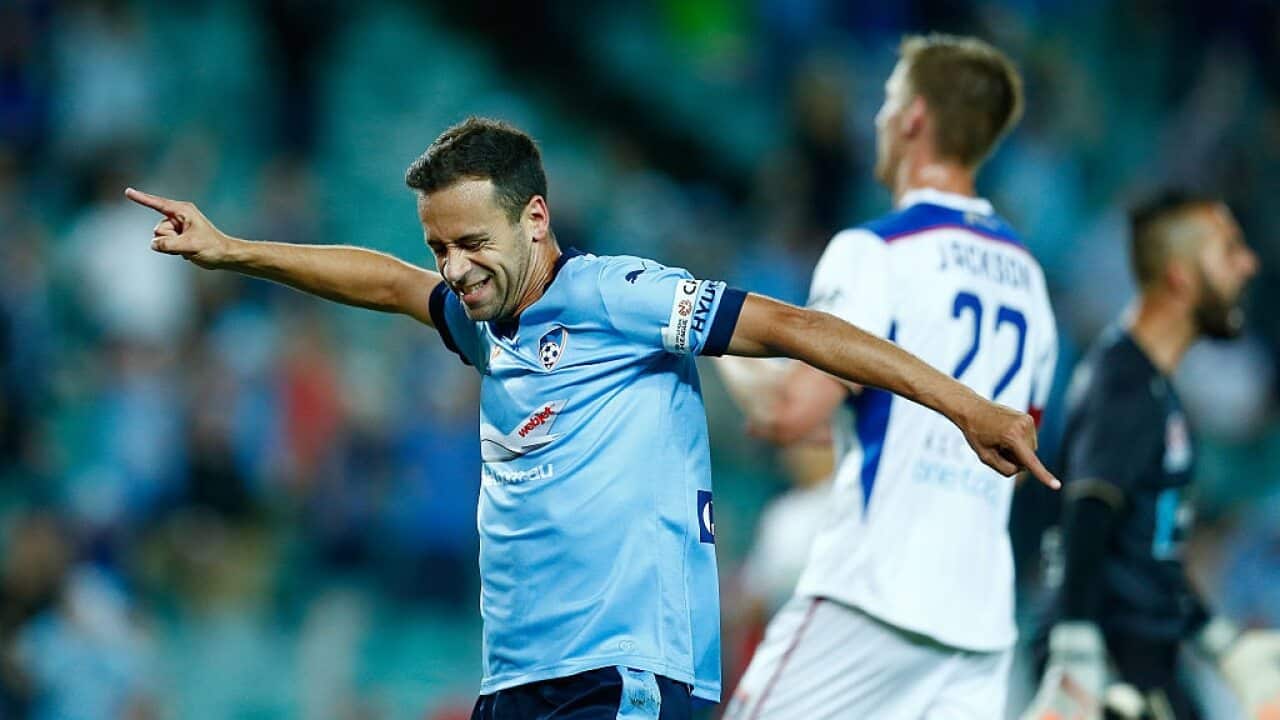 The question is: Who is going to start? And in which positions?

Arnold cleaned out the squad at the end of last season, recruiting aggressively and very well judging by the team's pre-season form. He is picking from a fit and in-form squad that has genuine depth and versatility.

Competition for places is so strong even captain Alex Brosque isn't sure where he fits in for the game in front of an anticipated 60,000 crowd at ANZ Stadium.

Advertisement
Asked where he saw himself in the line-up, Brosque replied: "I don't know, I really don't know. I'd say either the number 10 or out on the left. One of the two 10s, I'd say."

Brosque wouldn't be happy if he wasn't starting in the latest grudge match between the two intense rivals, which is poised to shatter the A-League crowd record of 55,436 set at the 2006-07 season grand final between Melbourne victory and Adelaide United at Etihad Stadium.

"No, definitely not," he said. "Especially round one."

It is normally a given that Brosque would start and it may well be the case here. It is just a case of whether Arnold considers him forward enough to start at this stage.

The coach may even think it's a terrific luxury to have a player like Brosque ready to come off the bench as a potential game-breaker in a clash like this.

Brosque, who turns 33 on October 12, has overcome a major hamstring injury that ruined last season for him, but it took some time to recover.

"I tore the central tendon, which is not your typical sort of hamstring injury," he said. "It's one that's quite rare to do and one that needs a lot more care.

"Following surgery like that the physio says it's not until 12 months post-surgery that you're completely in the clear, but the chances of it happening again are reduced and now it's been quite a while since the surgery and it feels good.

"It feels like I've done all the right rehab. My hamstring is actually feeling stronger than it was before I got hurt  and I've had no real hiccups up to this point, so I hope it continues that way.

"I've had a lot of games now in pre-season and it's not even playing on my mind anymore."

Brosque started off the bench when Sydney FC beat NSW NPL champions Blacktown City in an FFA Cup quarter-final on September 21, coming on in the 73rd minute.

In a further indication of the squad's strength of depth, central defender Matt Jurman, last season's Sydney FC player of the year award winner, only got off the bench in the 89th minute of that game and holding midfielder Milos Dimitrijevic didn't get off the bench at all.

Bobo, David Carney, Milos Ninkovic, Filip Holosko and Brosque are competing for the four starting positions in the attacking third.

Bernie Ibini is back in calculations as well now, having overcome a broken leg from last year, but he would presumably only be considered for the bench at this stage, along with Matt Simon.

"Normally going into a season you sort of know what the makeup of the team is roughly going to be" Brosque said.

"The intensity at training has lifted because of that and the quality has been great. There has been no real tension, either, from not knowing who's going to start. No bad blood, nothing at all. I think everyone is just focused on righting the wrongs of last season.

"It was quite a poor season by Sydney FC standards, so I think for us to be going back to where we want to be, in the grand final, we all need to be pulling together no matter who starts and who comes off the bench. Everyone has to be good enough to do a job."