Australian Grace Brown (Team BikeExchange) rode to a well-deserved third place finish at the 2021 Tour of Flanders, in an attacking performance that showcased her stellar classics form. 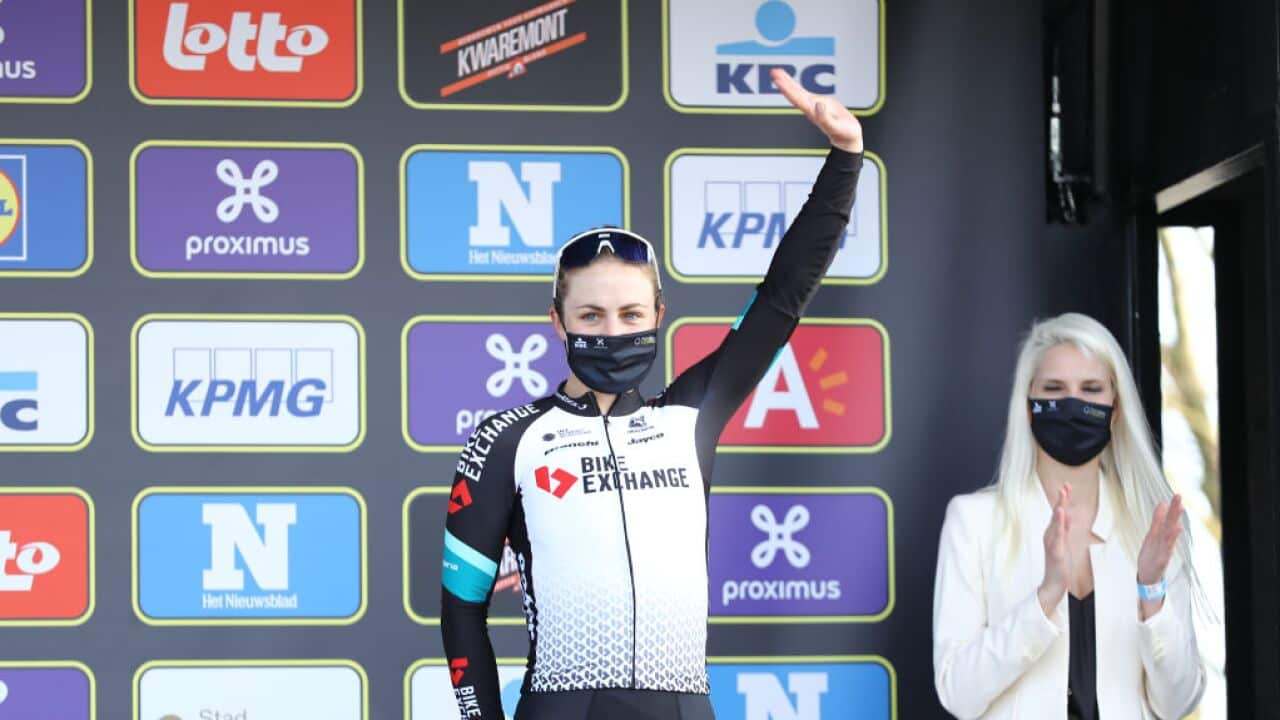 Australian Grace Brown on the podium of the 2021 Tour of Flanders. Source: AFP

The 28-year-old was aggressive throughout the race in pursuit of the win but was beaten for second place in the final sprint by Lisa Brennauer (Ceratizit-WMN) as Annemiek Van Vleuten (Movistar) soloed to victory for her second Flanders win and a historic first for her team.

Brown joined Van Vleuten as the first two over the peak of the famous Oude Kwaremont as the best in the sport battled it out on the ascent.

She then mounted another attack to attempt to breakaway from the peloton on the flat following the climb, but was caught by Van Vleuten and the rest of the trailing group.

Van Vleuten extended her lead to 20 seconds in the final stretch, crossing the line without challenge as Brown had enough left in her legs to get the podium finish.

Brown was happy with the her efforts and the support of her team despite not getting the victory, lamenting a lapse in strategy that allowed Van Vleuten to open up her late lead.

“Flanders is always such a busy day," Brown said. "There’s always so much that happens at this race and you can’t get it all right, but I think we really did well on some of our key points and had a really good race."


"I had an awesome lead-out into the bottom of the Kwaremont from (Sarah) Roy and (Amanda) Spratt and then I attacked at the top as we had planned. I got a bit of a gap but unfortunately the girls behind me closed that down pretty soon."

"Annemiek then got away on the Paterberg, it was a small gap and it felt like we should have been able to bring it back but unfortunately it just wasn’t co-ordinated enough in the chase.

"You can’t be disappointed with a podium at Flanders. Of course I came here wanting to win it, but I am really happy with third and I can have bigger goals for next year I think.”

BikeExchange sport director Alejando Gonzales-Tablas also acknowledged there could have been better communication amongst the riders during the race but praised their performances and Brown's result.

"It is a bit frustrating that the group didn’t work together more committed but at the end of the day for us it was an amazing day, the way the girls rode and how they committed," Gonzales-Tablas said.
"Grace pulled off a really good result. She has been really consistent in these races, she came out with good legs today.”