Brown wins opener at Vuelta a Burgos with late attack

Grace Brown (Team BikeExchange) celebrated her recent selection in the Tokyo Olympics squad with a strong win in Spain. 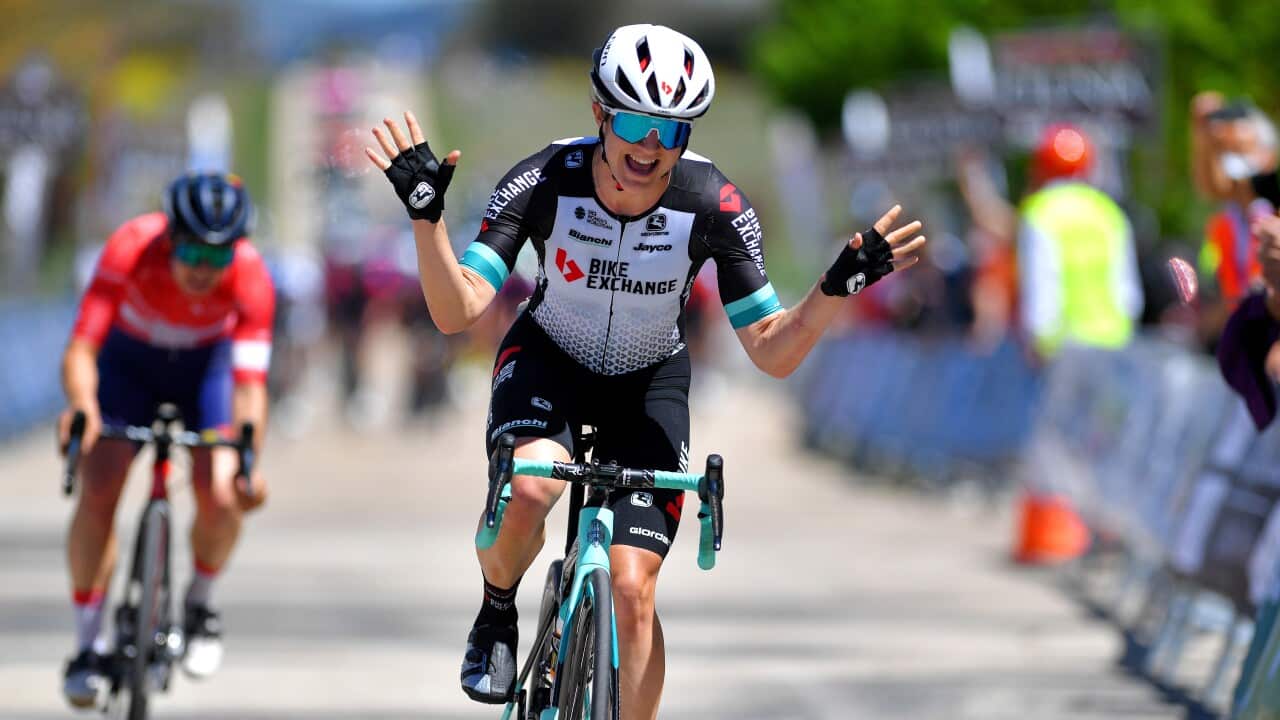 Grace Brown of Team BikeExchange celebrates the win on Stage 1 of the 6th Vuelta a Burgos Feminas Source: Getty

Brown powered to victory on the opening stage of the Vuelta a Burgos Feminas, attacking on the final climb of the day before taking the win in a three-up sprint to move into the race lead.

The race win came on the day of the Tokyo Olympics squad announcement for the road and track teams, with Brown confirmed for the time trial and road race.

Advertisement
Team BikeExchange controlled the race for most of the day, attempting to split the peloton in the wind after 30km of racing, before Georgia Williams and Sarah Roy then led the peloton and closed down a solo breakaway rider ahead of the final climb of the day.

Brown was well-placed at the head of the reduced bunch alongside teammates Amanda Spratt and Ane Santesteban as they began the final ascent and the Brugge-De Panne winner then made her move with six kilometres to go. Accelerating away from the peloton on the gradual slopes, only two riders were able to go with the 28-year-old’s powerful move.

The trio dangled around 15 seconds ahead of the bunch for the remainder of the climb and as they passed under the flamme rouge it was touch and go as to whether they could hold on to contest the stage victory. As the line approached, Brown led out the sprint, leaving her fellow attackers in her wake as she powered to her second UCI victory of the season and into the race lead.

“It was our plan to attack and try to win the stage," said Brown. "We wanted to put a little bit of pressure on early on in the crosswinds and see if we could split the peloton. My plan then was to hold on until the last climb and then attack as we got to the crest and try to hold onto that until the finish.

"I didn’t know if I would have any other riders with me, but I had two riders, unfortunately they didn’t work a lot with me until the end, Elise Chabby pulled a few turns and then it was a sprint against them and I got away with it."

Brown made the most of a downhill section on the run to the line to build up to full pace, she immediately got a gap and was able to hold the lead all the way to the finish.

"I knew on a normal day if we had all pulled equal turns then I could probably win the sprint but I was a bit unsure if I had done too much, so I was relieved to win in the end," said Brown. "I came into this race feeling pretty good after the last Spanish races so I was confident that if the stage played out as we planned, then I should have a pretty good chance today. It felt really hard after I attacked, and you are never really sure if you will hold on, especially when the gap is quite small.

"I was a bit worried if we played too many games at the end with the three of us that we wouldn’t keep the gap and the bunch would come past us, so I knew I couldn’t wait too late until my sprint, which is why I led it out.”