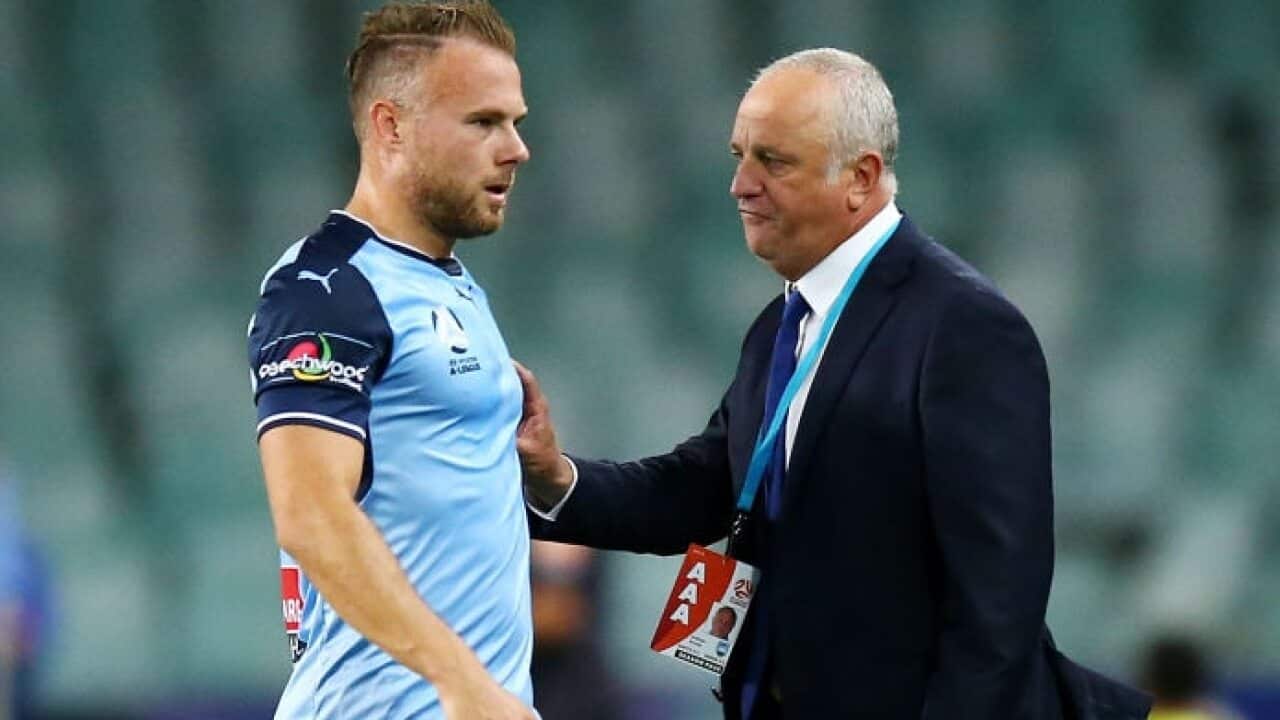 Raw replacement Aaron Calver, 22, had a torrid time against Suwon Bluewings as the watching Dutch defender was forced to endure the Sky Blues succumb 2-0 against their out-of-season K League 1 visitors at Allianz Stadium on Wednesday night.

Buijs wasn’t the only one left wincing, with ex-Adelaide United, Seongnam and Sydney FC stopper Ognenovski perplexed by what he believes is a faux pas which could severely compromise Sydney’s hopes of progressing in the tournament.

“One big mistake for me on the team sheet was Jordi Buijs not being selected for the ACL,” said the former Socceroos defender, who won the ACL crown with Seongnam in 2010 and was a finalist with Adelaide in 2008.

“Essentially what’s happened is that Arnie has gone into Asia believing his attacking players (Milos Ninkovic, Bobo and Adrian Mierzejewski) are better than those he’s up against in the ACL.

“If that’s what you think then you have rocks in your head.

“If you believe you can have a shootout with the Asian teams, you’re going to lose.

“They punish any mistakes, they are ruthless. It’s very different to the A-League.

“I thought leaving Buijs out was a very strange move, one I definitely wouldn’t have made.

“I don’t see why you would interfere a defensive block which has served Sydney so well, instead of making the hard decision of instead, for me, leaving Ninkovic out because I don’t think he’s been as influential as last season.”

Retired stopper Ognenovski, 38, believes the burden placed on Calver, with just nine minutes of A-League action under his belt this season, was too onerous as a penalty and a wonder goal from ex-Montenegro international Dejan Damjanovic sealed Sydney’s fate.

“Jordi forms a great partnership with Alex Wilkinson and you’ve broken that spine and put a kid in who’s probably not up to A-League standard,” he contended.

“You’ve put him in and said ‘this is your chance to shine’ but then it hasn’t worked.

“And now you’re thinking what do I do now?

“Knowing Graham Arnold as a coach, it’s even stranger that he’s taken this path because I know how much emphasis he puts on defense.

“I was just shocked not to see Buijs selected. He takes corners and free-kicks and is such an important player for Sydney.”

READ MORE
Asia provides some home truths about the A-League

If Sydney are to save their campaign on their road trips to Shanghai Shenhua next week and the duel in Japan against Kashima Antlers, they need to “frustrate” the opposition, according to Ognenovski.

“These teams are not tactically better than Graham Arnold, it’s just that they have more fire power,” he said.

“That’s where you have to be smart tactically to overcome the talent gap, just as Western Sydney Wanderers did in winning the competition in 2014.

“We also made final with Adelaide playing defensive football.

“Sydney have dominated in the A-League but it all changes in the ACL.

“Having lost at home now it’s going to be really tough to get out of the group, especially with their next two games against the strongest two teams.”