Team ownership isn't a hands-off proposition for those in the National Road Series (NRS). Michelle Balaz and Andrew McCosker have built Phoenix Cycling Collective from scratch into a team with a real family feel. 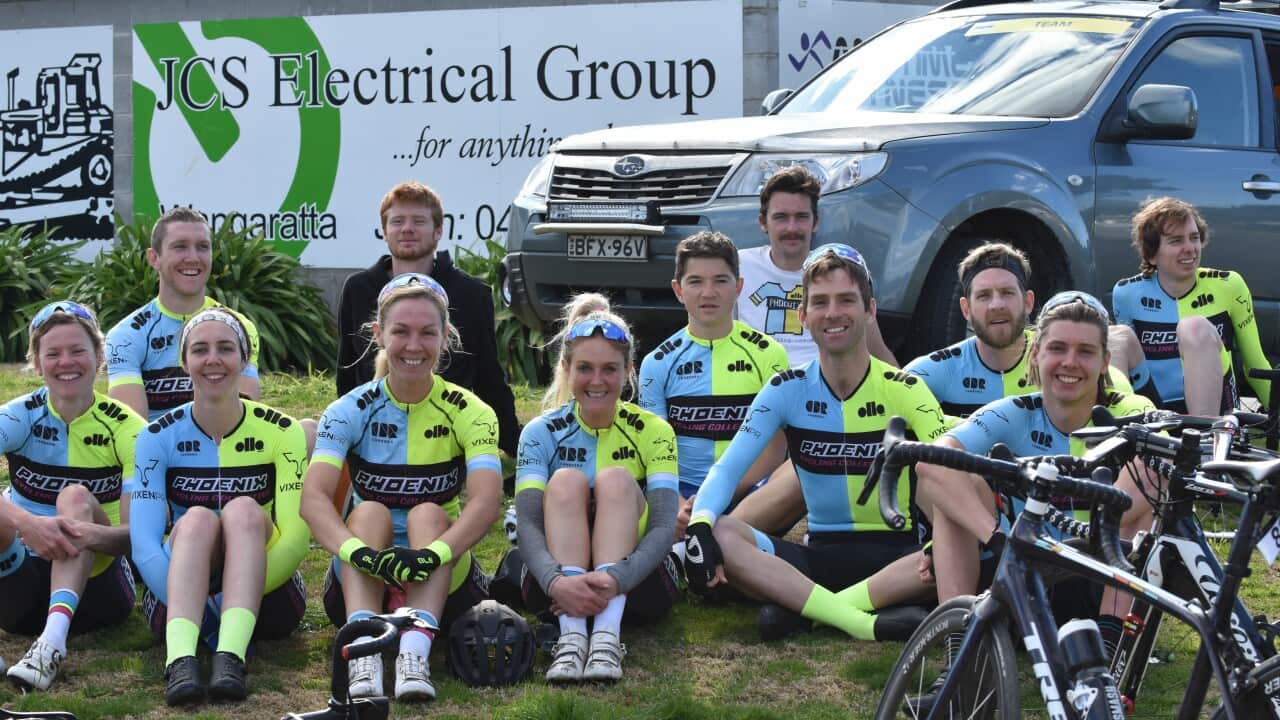 Michelle Balaz is a consistent figure on the side of the road at NRS and local cycling events, juggling a camera, a dog (the greyhound 'Oppy') and a video recording device... on top of managing one of the teams racing.

The story of its origins in 2014 is probably the clearest insight into why the team has formed such a tight-knit group.

"Andrew and I had a choice between two 'big-ticket' items that we could do," Balaz said. "We could either get married or put togther an NRS team. It's been fun for the relationship, we're the kind of people that go for goals more than the traditional things you need to tick off to say that you're an adult.

Advertisement
"It really is a family atmosphere within the team, we love and care for one another. Study, work, relationships... nothing is off the table. We always talk and hang out, go to dinner, race and train together. We see each other almost every weekend to race and you would think that would mean we'd get on each other's nerves, but it's not like that at all."

It's very much morphed into a non-traditional family format, Balaz and McCosker the doting parents, organising everything and trying to give their 'children' the best chance at succeeding in life and cycling.

Typically you'll find the team crammed into one house at races, bikes cluttering the hallways, some sort of pot with lots of carbs simmering away on the stove as the riders and support staff gather in the living room and chat.

These race-day accommodations have grown even more crowded after the decision to add a women's roster this year to Phoenix. They are the only team that isn't backed by a state Institute of Sport that runs both a men's and women's team.

"The men's team has been running a while now and we've taken some great state opens and club results," Balaz said. "But we're most excited by starting the women's team this year.

"We're entirely Canberra-based and it's great to be able to offer that opportunity to women locally as well as the men. There wasn't going to be a pathway for the female cyclists in Canberra this year (CBR Womens Racing did end up racing in 2017 as well) and that's why we stepped up to establish the team."

That commitment to developing local cycling hasn't come without cost however. There's rarely much money floating around in the sport and that leaves it up to passionate people to bridge the gap and sacrifice time and money to make the sport work at a grassroots level.

"Balancing the two teams, whilst you'd think that it would be a natural progression and not a great deal of extra work... it's a lot of work," Balaz said. "We roughly put in three hours every night and almost every weekend we're out racing on the NRS circuit or at club races around Canberra. We're really passionate about developing cycling in Canberra. We host cycling events - mostly local criteriums - as well as volunteering at other events.

"It's absolutely run on passion. Our sponsors are great and have come on-board to try and help cycling grow within Canberra. In terms of Andrew and myself, I don't even want to know... I know the time we spend on it, but the money we actually spend on it? But we'll continue to do that to ensure our guys can ride at the national level."

Andrew McCosker is the other half of this partnership at the head of Phoenix Cycling Collective, riding as part of the team on top of all the duties behind the scenes.

"We sort of jumped in the deep end," McCosker said, "we didn't know anyone, we didn't have the blessing of the cycling mafia or anything like that. I had a fair idea of the paperwork involved and had a bit of cash, all we needed were the riders.

"You see it every year, teams with six-figure budgets come into the sport and are gone the next year because they don't have the right management and can't motivate the riders."

"You get the right riders, ones that are keen to race and aren't just showing up for a bike and some kit and you'll go places. A lot of it came down to the guys we started with and a lot of them are still with us. A few have left over the years, to go with other teams or to do other things... you can't be an amateur cyclist all your life."

McCosker brings a more taciturn approach to the interview than the effusive Balaz, but you get the sense that they strike a good balance in the management of the team responsibilities - a useful trait since the addition of the women's team has meant more than merely doubling the workload.

"It's not as easy as 'Let's just double everything and go'. The kit, it looks the same, but of course, it's very different for the women," he said. "Try booking a house for 15 people, there aren't many of them around, transporting twice as much stuff, plus racing together means the support car doesn't get a break at all, while most teams are done after half of the day."

The real goal of all of this work and sacrifice as a development team is the joy of seeing one of your protégés take that next step and perform on the next level. Perhaps the rider most likely to make that leap is youngster Lauren Thomas, already the under 19 NSW road race champion and taking her first steps into racing against some of the best in Australia.

"I hadn't actually experienced being part of a team before racing as a junior," Thomas said. "Except with the ACT squads. Like today, it was great to experience a good sized bunch with competitive racing. I've never been in a team where everyone knows each other really well and works off each other."

The value of teams such as Phoenix to the growth of racing and elite competitors within Australia is incalculable. Certainly, only a fraction of our current crop of domestic talents would be cycling at the top level without a strong local scene.

The learning opportunities offered by the chance to see some of the best in action up close isn't a fact lost on young Thomas, who relished the chance to get to race alongside two-time Individual Pursuit world champion Rebecca Wiasak at the Tour of King Valley.

"I look up to Beck Wiasak," Thomas said. "I've actually ridden with her before in a team pursuit and we talked together today in the bunch. It was good to watch what she does and try to implement it in my riding as well."

Such opportunities are the result of passion, effort and sacrifice along the way and the family atmosphere forged by Phoenix Cycling Collective is both a touching and important part of Australian cycling culture.

Like a number of Australian teams, particularly the state institutes, Phoenix will be continuing without any assistance from the ACT government next season.