Cahill reveals what he said to get red carded

In manic scenes during Saturday's highly controversial Melbourne derby, Melbourne City striker Tim Cahill was sent off for dissent without even making it onto the pitch. 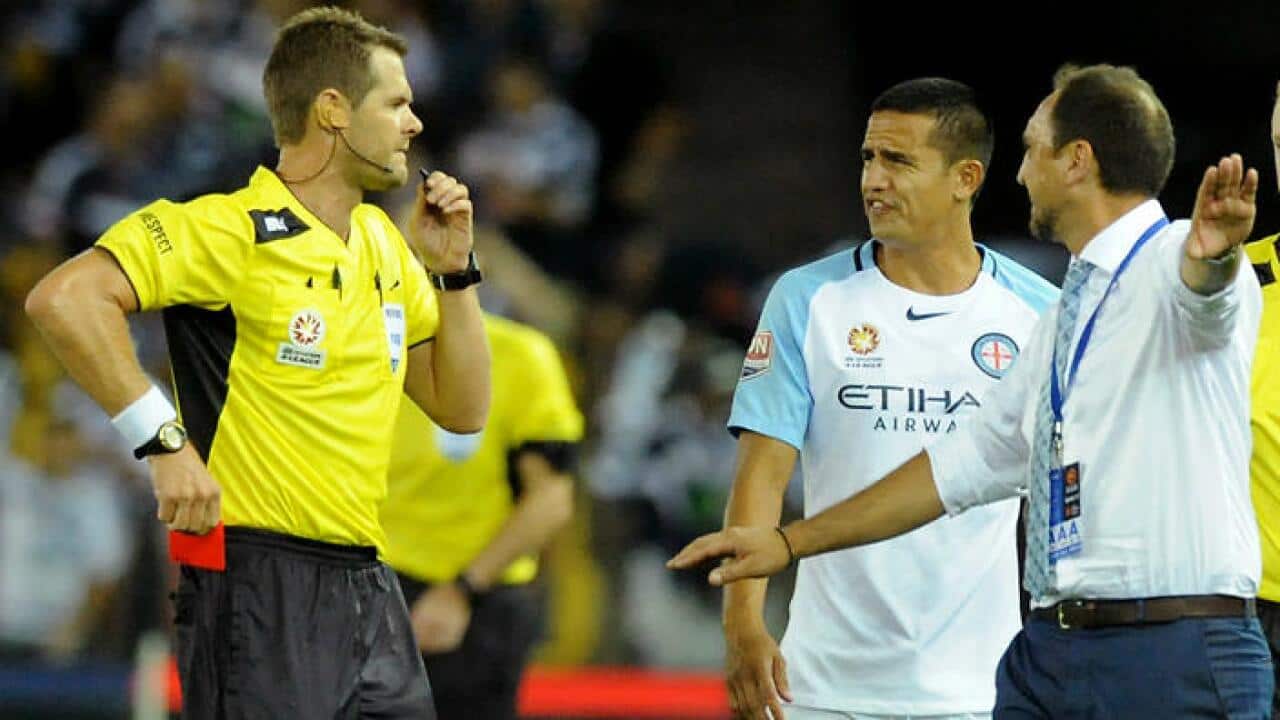 Now Cahill has revealed to former Socceroos goalkeeper and Fox Sports pundit Mark Bosnich exactly what he said to earn the ire of referee Chris Beath.

After starting on the bench, Cahill was on the sideline preparing to come on as late substitution but was handed a straight red card for “insulting, offensive, abusive language used towards a match official”.

The heated moment occurred after Beath had ruled Melbourne Victory’s controversial late winner — an own goal to City’s Manny Muscat — would stand.

Advertisement
Cahill confronted Beath about the decision with the referee taking umbridge at the comments he made.

“I’ve spoken to him [Cahill], to be fair to him, he told me and he said I could say it straight,” Bosnich said on Fox Sports.

“He was red-carded by the referee [because] he told the referee to ‘have a look at the big screen’ and that ‘you’re a effing disgrace’ ... He said nothing more, nothing less.

“He’s not excusing it in any type of way nor is he hiding from it, he’ll take any punishment that’s afforded to him.

“But that’s basically exactly what he said.”

There have been calls for Cahill's red card to be rescinded but former Sydney FC and Adelaide United coach John Kosmina feels it should stand.

"I don't think it can be [overturned]. The fact is he did commit an offence," Kosmina said on Fox Sports.

"Maybe Chris Beath the referee did overreact but the fact is Tim was quite open and honest with what he said to the referee.

"If you exonerate him then it leaves it open for any player to give the referee a gob full, including swear words, and expect to get away with it."

Should Cahill and Bouzanis receive lengthy bans is would add to City's woes, with coach Michael Valkanis already dealing with a heavily depleted squad for next week's crucial clash with Brisbane Roar.

City will be without skipper Bruno Fornaroli, Fernando Brandan, Luke Brattan, Manny Muscat and Osama Malik, after those players picked up their fifth yellow card of the season, while Michael Jakobsen is set to miss the clash through injury.