Cahill’s green and gold legacy stands above all others

Legacy’ was the name of Tim Cahill’s autobiography. And it’s that word which, on the day of his international retirement, can’t be separated from his name. He leaves arguably the biggest legacy the Australian game has seen. 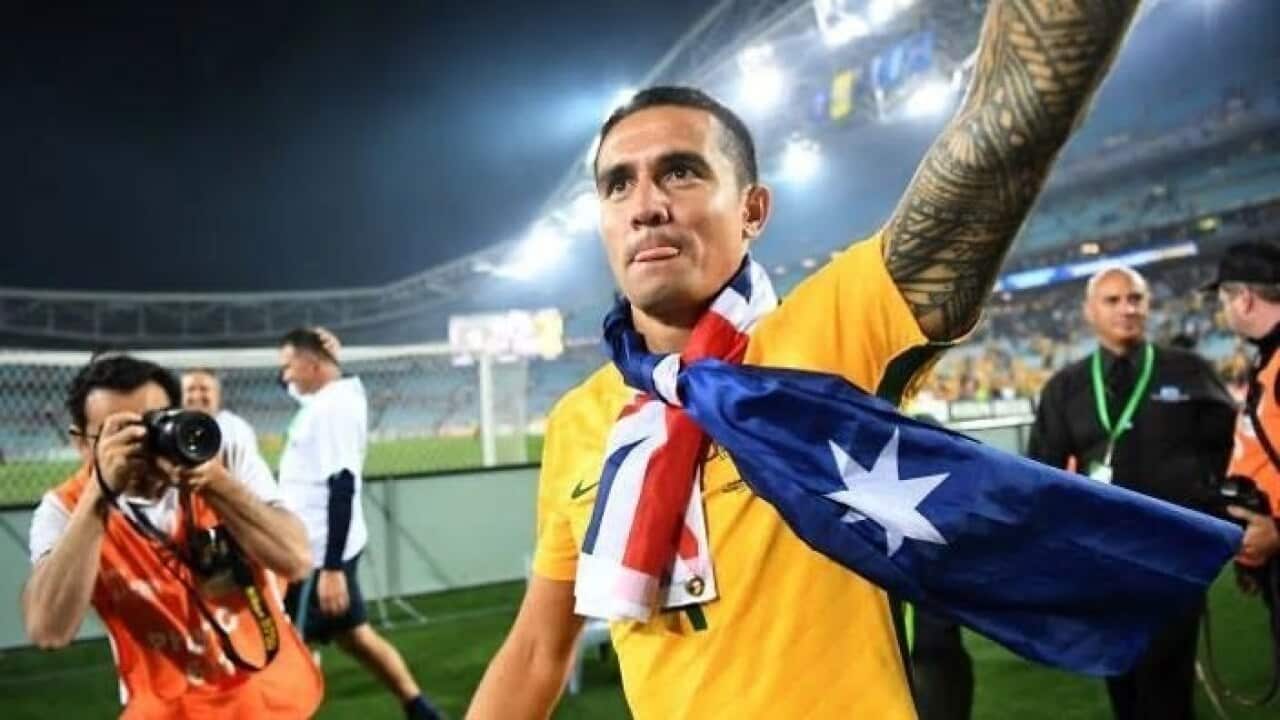 Johnny Warren fuelled belief, then Craig Johnston blazed the trail. Harry Kewell was a shooting star, Mark Viduka a gifted genius. Standing on their shoulders, Cahill then reached over the wall and become adored by the mainstream in a way that no Australian footballer has done before.

He has achieved a status in the greater national consciousness which is occupied by so few. Cahill is both loved and respected universally, alongside the likes of Steve Waugh, Greg Norman, Pat Rafter, Mark Webber and Cameron Smith.

The odd part is that Cahill was not the most talented player, not even by a long shot. But for perseverance, dedication and relentless commitment, he didn’t just pass his rivals – he lapped them.

Advertisement
And it was that which resonated so deeply with the Australian public, who value 'having a go' more than having it all. Cahill would always put his body on the line, especially if there was an aerial duel to be won. That leap ought to be trademarked.

At just 180 centimetres, Cahill was no giant, and yet he is among the finest headers the game has known. His ability to shake a marker, judge the incoming flight, make solid contact and guide the ball into the net was beyond compare.

It’s not worth tallying up all the times his forehead saved Australia. Every goal seemed to get the nation out of a bind at least a couple of times per year, both home and away. No wonder the newspapers begged for his inclusion in Russia.

Cahill loved playing for Australia. He loved being in camp even more. He was the pied piper; keenly recruiting young players to mentor and be around. In a way, that kept him young. He talked their language and related better to them than his contemporaries. He is 38 going on 21, with the same energy levels, too.

Politically savvy, as he grew older he positioned himself as a conduit between coaches, sponsors, leadership groups, administrators, broadcasters and players. He had an uncanny ability to read how the deck was stacked and which hands needed shaking.

Indeed, just as everyone expected Cahill’s tenure would end with the national team when Ange Postecoglou arrived, he dramatically re-packaged himself as a humble, hungry servant, repaying Postecoglou with some amazing moments: the Netherlands’ volley, the overhead goal against China and a World Cup-saving brace against Syria.

As a youngster, he was cautious with the media. By the end, every microphone and camera was opportunity to advance a cause: Weet-Bix, Cahill+, Foxtel, his own coaching clinics, Adidas, then Warrior, then New Balance and others. He even lobbied David Gallop to make an offer to get him to the A-League. He pumped daily content into Instagram, growing his influence exponentially.

But many fans didn’t hold back in criticising his escalating commercial elements, the apex of which was “Cahilltex”, an unfortunate play on words that seemed to lampoon his personal brand.

Some were vocal that he hung the national team around too long. But given there was no suitable replacement, who can blame him? Other players should have moved past him long ago but didn’t – and Cahill was never going to turn down a cap. Nor should he. That wasn’t in his DNA.

He didn’t get the World Cup he wanted in 2018 and one senses we will never know the full story of what unfolded. There’s two sides to it: why was he picked on such little game time and then why, once selected, was he hardly used? He didn’t say a single word to the press after each of the three games. It will be most fascinating to find out what Cahill and Bert van Marwijk have to say in due course.

Ultimately, the fairy tale ending of scoring in four World Cups wasn’t to be for Tiny Tim. But then, it’s still a miracle he’s even made it this far: the first Australian outfielder to 100 caps and 50 goals. What an extraordinary achievement.

Now we must ask ourselves: who will stand on his shoulders and be the next to climb over that wall?