Cavendish a contender for stage wins at Tour, declares coach

Mark Cavendish's coach Vasilis Anastopoulos has declared the Manx Missile won’t be just making up the numbers at the Tour de France and will once again be a contender for stages wins. 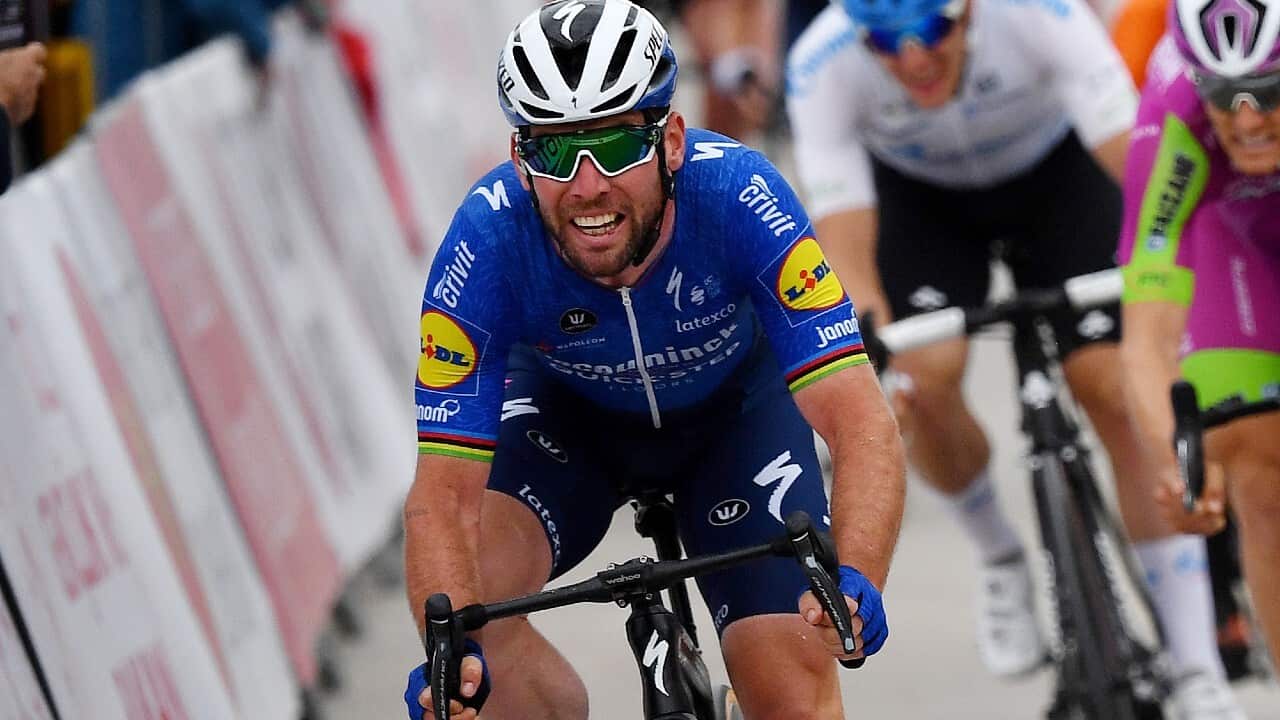 Mark Cavendish will contest his first Tour de France since 2018 after a shock call-up to the Deceuninck-Quickstep team for this year's race Source: Getty Images

Cavendish was a surprise 11th-hour addition to the Deceuninck-Quickstep Tour team after Irishman Sam Bennett, the reigning Tour de France green jersey winner, was forced to withdraw due to a knee injury sustained in training.

The Manxman’s last-minute selection comes after an impressive run of form which has included five stage wins this season with four at the Tour of Turkey in April and victory on the final stage of the Tour of Belgium earlier this month.

Advertisement
While it will be Cavendish’s first appearance at the Tour de France since 2018, his coach Anastopoulos says the 36-year-old is ready and firing to add to his incredible tally of 30 stage wins at La Grande Boucle.

"The decision was made at the weekend so we knew that we had to let Cav prepare like he was going to the Tour, just in case something happened to Sam,” Anastopoulos told the Tour de Greaves Cycling Show podcast.

“The preparation wasn't ideal because he didn't have any altitude training but after the Tour of Turkey he had a short rest and then came to Greece with me and we had a nice training camp for 10 days, a hard camp.

"He's done a good block of racing and then last week he won the final stage of the Tour of Belgium against some of the best sprinters in the world.

"He's shown that he's in good condition, he continued to train last week and I'm confident he's going to the Tour in a shape which will allow him to win at least a stage."

Cavendish’s return to the Tour de France peloton means he will have another chance at equalling Eddy Merckx record of 34 stage wins, but Anastopoulos says just being at the start line in Brest is a big enough achievement.

"Cav just being at the Tour is the biggest surprise that has happened this year - just have a look at what happened over the last three years!"

"Being a happy Cav was our first priority. Cav winning a stage this year in any race was a second priority. Now being at the Tour is huge.

"Whatever happens now is a bonus. We're not going to chase down the record of Eddy Merckx because that's something he never talks about; it's always the media and the journalists that ask those questions.

"I am just happy that Cav will be at the start on Saturday. If he wins a stage then chapeau, if he doesn't no one is going to blame him.

"He's come from nowhere – he's hadn't won anything for the last three years. He's gone through some really bad moments; he battled with depression, he almost quit last year and everyone knows the story.

"But he's not finished yet!"