Arsenal goalkeeper Petr Cech has revealed he is taking a leaf out of Mark Schwarzer’s book of dedication in order to milk the most from his own talent. 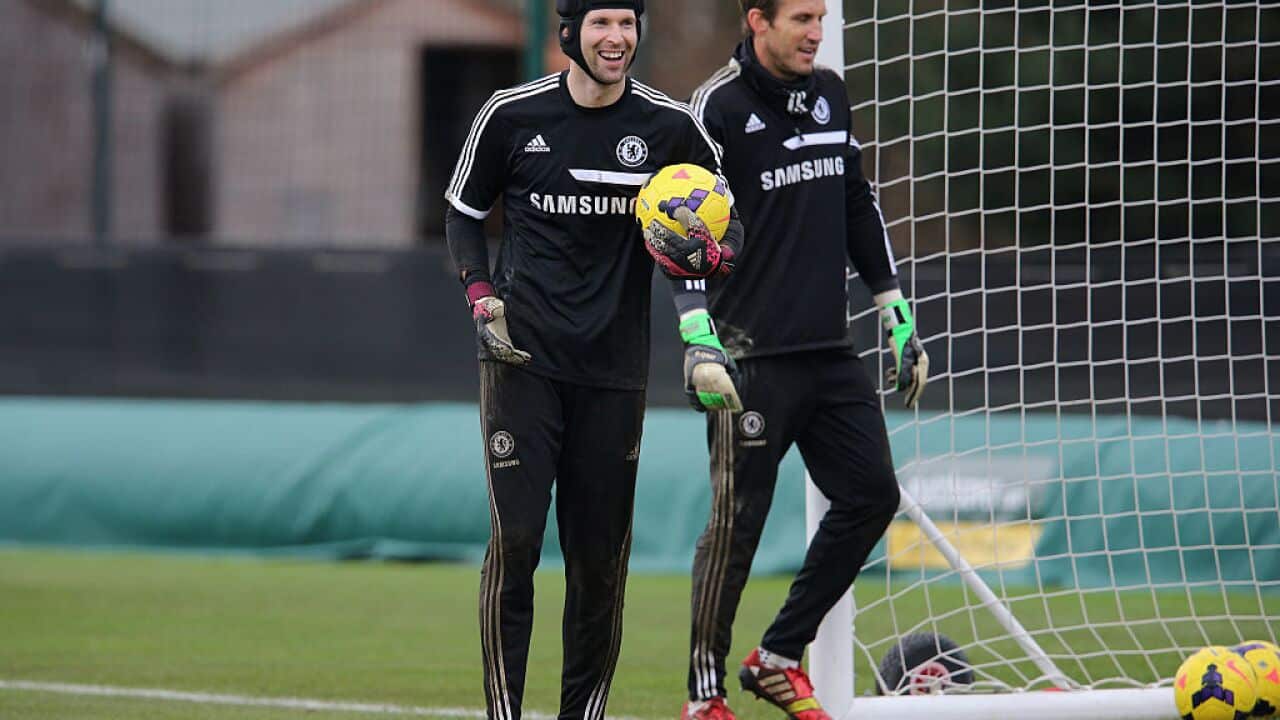 The 34 year-old Gunners gloveman is a decade younger than the almost-retired 109-cap Socceroos legend, who left an indelible impression on him during their one year together at Chelsea.

And Cech, talking to SBS ahead of Saturday's live coverage of Arsenal's visit to Manchester United on Saturday night, disclosed how his admiration for the 44 year-old former Middlesbrough, Fulham, Chelsea and Leicester shot-stopper became an inspiration.

Cech, who will be seen in the flesh by Aussie fans when the Gunners descend on Australia for the first time in 40 years for showpiece games against Sydney FC and Western Sydney Wanderers at ANZ Stadium next July, said: "I was also fortunate enough to play with Mark for a season and when you see how professional and dedicated it's no surprise he played for so long.

"I think he's one of those guys who makes everyone want to train more. He has shown huge dedication and played his entire career in Europe as well as more than 100 games for Australia.

“He's one of the most dedicated players I have played with. It's great to have someone around you like this who works hard and pushes you every day.

"You always know what you'd get from him. You put him in and you know he will perform  ... he has been brilliant and has had a fantastic career."

Cech was part of the Chelsea side which beat Sydney FC 1-0 in front of a sell-out ANZ crowd 16 months ago – and he is eager to return to Sydney in the colours of Arsenal.

"It was a great experience because I had never been there with a club and obviously we wanted to see how much support we had in Australia and it was good to see how many people there watch the Premier League.

"I used to play alongside (former Sydney FC defender) Jacques Faty in France, and knowing him I knew the team would have a quality set-up."

Cech was also schooled in all things A-League by Schwarzer before arriving last year and knows the London giants will be in for a stern examination against the Sky Blues on July 13 and the Wanderers two days later.

“Mark spoke about the evolution of football in Australia and it was good to see how popular the game has become there,” he added.

“It's always important to have these confrontations with the top teams because you can see where you stand ... if you improve, if you don't improve.

“It gives you motivation and confidence as well if you know you can compete against a top team.

“We know how much support we have, and they waking up to watch us from a long distance and now they will finally be able to come and see us live. We want to get in touch with our fans there."

Asked how seriously Arsenal would take the tour, Cech insisted little quarter would be given.

"You fight for your place in the team because places are not guaranteed by what you have done in the new season before," he said.

“Everybody comes from scratch and you have to make sure you are fit and ready to perform. You have to do the right things, not only in training but in those games as well.

“You can never relax because there are always people behind waiting to take your spot.”

More imminently, Cech is relishing his reunion with Jose Mourinho in the traditional spite match between the fierce foes.

"I know him. I worked with him but for me it's a big game regardless of whether Jose Mourinho is the manager or not," he said.

"I don't think he can be satisfied so far with what they've (United) have done.

"They had a good start in terms of points but have maybe fallen behind a bit (eight points off top spot) and have to find a way to close the gap.

Cech believes this season’s tithe race could go down to the wire.

"It's very tight and it will be the last game (when it's decided) but we are well equipped and ready. There's a good balance with experience and young players coming in.

"We were almost there last season but missed a bit of consistency at times but it was a good lesson."

Aiming to channel Schwarzer's longevity, he believes there can be many more trophies and medals to come in career which he sees still stretching far out in front of him.

“You need to be fit and make sure your body copes with the pressure," he said. "It's how well you train, how well you prepare. You must do that to continue playing as long as possible. I will carry on because I like this challenge every day.”