Chaves back to his best with Catalunya mountains win

Esteban Chaves (Team BikeExchange) banished nearly two years of racing without a victory, jumping clearly of the INEOS Grenadiers-led peloton and just holding them off into the summit finish in Port Ainè on Stage 4 of the Volta a Catalunya. 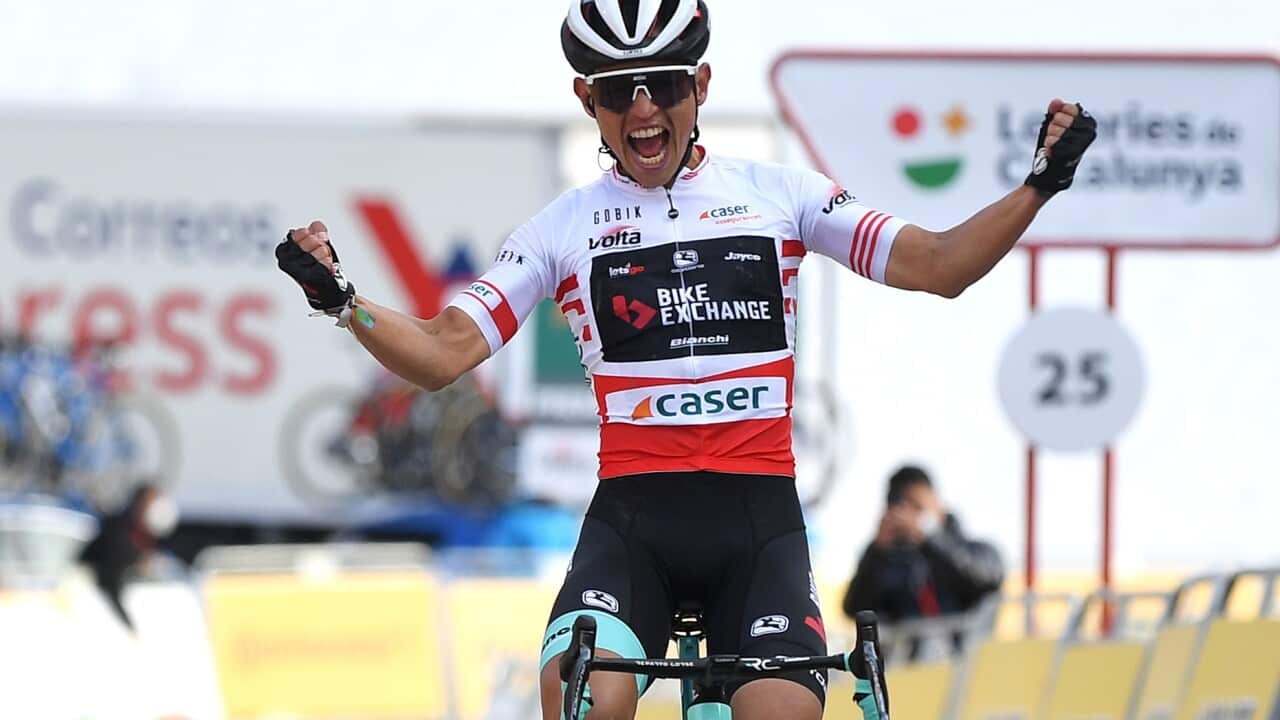 Chaves took the win at Volta a Catalunya in a manner that recalled his heyday in 2015 and 2016, when his attacks of finishing climbs netted him a number of victories and were the basis for his push for Grand Tour victories.

In 2021, he was back to that same form, attacking the imposing mountain train of INEOS Grenadiers with seven kilometres to go and holding on for a spectacular solo victory in Port Ainè to deliver Team BikeExchange’s first WorldTour win of the season.

With a time gap that only rose to 25 seconds at most, Chaves' lead was only 13 seconds with a kilometre of steadily-rising climb left to race, it was touch and go all the way until the last few hundred metres when it became apparent that there wasn't enough road left for the chasers to catch the Colombian.

Advertisement
"I'm really happy," said Chaves. "I've never started a season feeling so good and winning like this. It's a WorldTour win for the team, and the first victory as BikeExchange, so I'm very happy. We've worked very hard.

"I've had some difficult months and years but the team has helped me a lot, as have my family, my girlfriend… It's a great satisfaction."

Chaves has had a series of health issues in recent years, he was orced to sit out most of the 2018 season to recover from the Epstein Barr virus and has since only shown flashes of the form which helped him to podium finishes at the Vuelta Espana and Giro D’Italia in 2016.

After his second place finish on the Stage 3 summit finish Chaves talked about losing confidence in the crucial moment as he approached eventual stage-winner Adam Yates (INEOS Grenadiers). Today, there was little sign of faltering as Chaves dug deep in the finale to claw his way to victory as the other top climbers began sprinting behind.

"It gives me a lot of confidence and a lot of calm," said Chaves. "I've worked really conscientiously and the work is starting to bear fruit. Winning is always beautiful and special, and I want to thank my team, who did an amazing job today."

“It’s no secret that for some months things were really tough for me. So a performance like this gives you a lot of pleasure and happiness after all those difficult moments, it’s payback time for all the hard work and a way of saying 'thank you' to all the people in the team who kept on believing in me.”

Chaves moved up to sixth overall, a minute and four seconds behind the lead of Adam Yates, with Chaves' BikeExchange teammates Simon Yates and Lucas Hamilton currently tenth and 11th, respectively.

“For Simon [Yates], Lucas [Hamilton] and me it’ll be important to maintain our GC placings as best we can and maybe try to improve them," said Chaves. "I’ve got the King of the Mountains jersey as well, and it’d be nice to keep that one too to wear in Barcelona on Sunday.”

The second consecutive summit finish in the race saw a big break full of talented climbers form on the first climb of the day, the Port de Toses.

The group were never really allowed much leash by the chasing peloton, Kämna started the day with just a minute and 33 second deficit to race leader Adam Yates, so INEOS Grenadiers took the lead, holding the break's gap at around two minutes and 30 seconds at the top of the ascent.

The lead hovered at around that mark all the way until the next climb where Kämna used the steep initial slopes to attack with just under 50 kilometres remaining. At that point, Kämna had 1:35 on his former breakaway companions, with the peloton at three minutes and 25 seconds behind but INEOS soon intensified their chase.

Australian champion Rohan Dennis took over the chase at the foot of the long final climb and the Australian reduced the gap to less than a minute with 16 kilometres to go and caught Kämna. Steven Kruijswijk (Jumbo-Visma) tried an attack, but it was brought back before Chaves tried his own assault, jumping clear and steadily building an advantage which dwindled towards the line, but proved just enough for the Colombian to hang on.