Back in the W-League after two-and-a-half years in Spain, Melbourne City midfielder Alex Chidiac is “definitely” hoping to return to Europe at some point, but has developed a newfound appreciation for the conditions of the Australian top-flight during her time abroad. 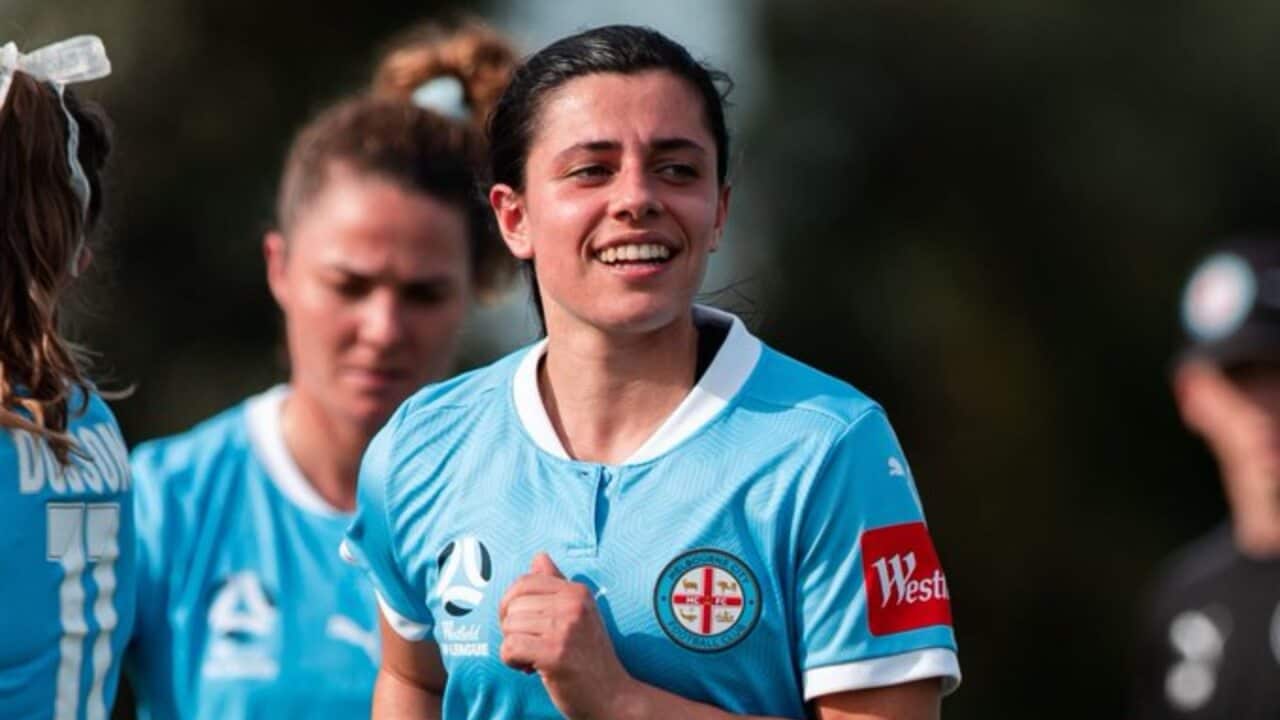 Alex Chidiac during her time with Melbourne City Source: Twitter

Bursting onto the W-League as a 15-year-old with Adelaide United, Chidiac earned a debut for the Matildas as a 16-year-old - since going on to make 17 appearances in Green and Gold - and spent four seasons in the Australian top-flight, including winning a title with City in 2015/16, before becoming one of the first Australian players to move to Europe when she signed with Spanish powers Atlético de Madrid.

Although she was largely used as a bench option during her first campaign, making 16 substitutes appearances compared to three starts, Chidiac’s opening forays into life in Spain in 2018/19 were highly promising; playing 501 minutes across 19 appearances as Atlético won a Primera División Femenina title.

However, an ankle injury prevented her from capitalising on her strong start to life during 2019/20 and she was subsequently forced into an "eerie" coronavirus lockdown in Madrid early in 2020 before she was able to get back to Australia on sparsely populated flights via Frankfurt and Doha.

Advertisement
Due to the effects of the COVID-19 pandemic, the 2019/20 season was ultimately cut short by Spanish authorities, who revoked relegation and named Barcelona - who had gone 21 games without defeat - as league champions.

Returning to Spain for the beginning of the 2020/21 season, Chidiac made two further appearances for Atlético -- a 13-minute cameo in a romping, 8-1 win Deportivo de La Coruña and a nine-minute appearance in a 1-1 draw with Granadilla Tenerife - before her contract with Las Colchoneras was mutually terminated in December and she returned to Melbourne City.

“I guess [thoughts of returning to Australia] started a bit earlier in 2019 when I first got injured,” Chidiac explained. “The injury shouldn’t have lasted as long as it did and I think part of then when COVID hit too, everything was up in the air.

“Things were taking longer than I would have liked to and I think I needed a little bit of stability in what was going on and get my ankle sorted out. So, that had a bit of that to do with it, a little bit of more consistency in-game time and being around family once again, family friends. A little bit of everything came into that decision.”

“I think I was thinking more that I would come back on a loan but then, just with everything that was happening it just worked out perfectly to do it the way it happened and I’m just really happy to be back home now, out of quarantine especially.

“City has been, ever since I was 16, they’ve been in contact with me, just checking in, not pushing anything, I always knew the option was there and then things kind of fell into place and it worked out perfectly.”

Chidiac is the second player to have returned to City from the Spanish leagues this season, with Jenna McCormick also having made camp in Bundoora after a challenging spell at Real Betis.

The defender told SBS The World Game in December that it was “nice to finally be back around people who do care about you as a footballer, as a person and are happy to have you in their room.”

Chidiac’s time in Spain was marked by a vote by almost 200 players in the Primera División Femenina to go on strike during the 2019/20 season over a disagreement over pay and conditions - forcing the postponement of round nine - and said the hard-won conditions for players in the W-League shouldn’t be taken for granted.

“I think it’s difficult because obviously, the women’s game is still growing,” she said. “Some clubs have very big names, and you’d think from the outside looking in that it’s very professional and things are done the right way, but sometimes that’s not what you get, unfortunately. That’s still growing in that sense too.

“There were times that were, you would think that things would be a lot better, the standard would be better and that’s why now looking back at the W-League and what we have, especially the support of the PFA, we’re very fortunate here and I think that shows. That’s another reason I’m back right now because I needed that support.

“I think that that’s something that a lot of young players need to be aware of. When I was younger coming through I had no idea how good I had it. I mean the PFA have gotten us a minimum wage and my first season, which wasn’t so long ago, I didn’t get paid here and now players getting in they get a lot of support and I’m very grateful.

“Even when I was in Spain the PFA was supporting me and in constant contact, so I think we have it very good here and I’m proud to be Australian for that.”

Chidiac, however, is still keen to explore overseas options again in the future.

“Ever since I was young, I wanted to travel the world with football. It’s a little bit more difficult with COVID that hit.

“I definitely want to head back, I don’t know what country it will be, once again seeing how this season goes but I’ll definitely be heading overseas again at some stage.”

Just a day out of mandatory, two-week quarantine, Chidiac made a half an hour cameo for City in their comprehensive, 6-0 defeat at the hands of Melbourne Victory on Sunday, watching on as their cross-town foes piled on the pain late to seemingly announce that there had been a changing of the guard in Melbourne’s W-League scene.

With just a single point from their opening three games, another defeat at the hands of their local rivals on Sunday would effectively give City zero margin for error through the rest of the season should they hold out any hope of playing finals football.

“Obviously [the loss was] a difficult one to take, we lost by a pretty big margin,” Chidiac said.

“It doesn’t just hurt the players, it hurt everyone. We’ve been working extremely hard on making sure that doesn’t happen again and our game plan.

“I think we’ve responded really well. We acknowledged it happened, we’re not dwelling on it, we’ve moved on and we know what we need to do this weekend and we’re really confident in that.”