And so after two action packed weeks in Russia, we are finally at the final. No prizes for guessing who came out on top, with two of the highest-ranked teams in the world – Chile and Germany – making it through to the decider. 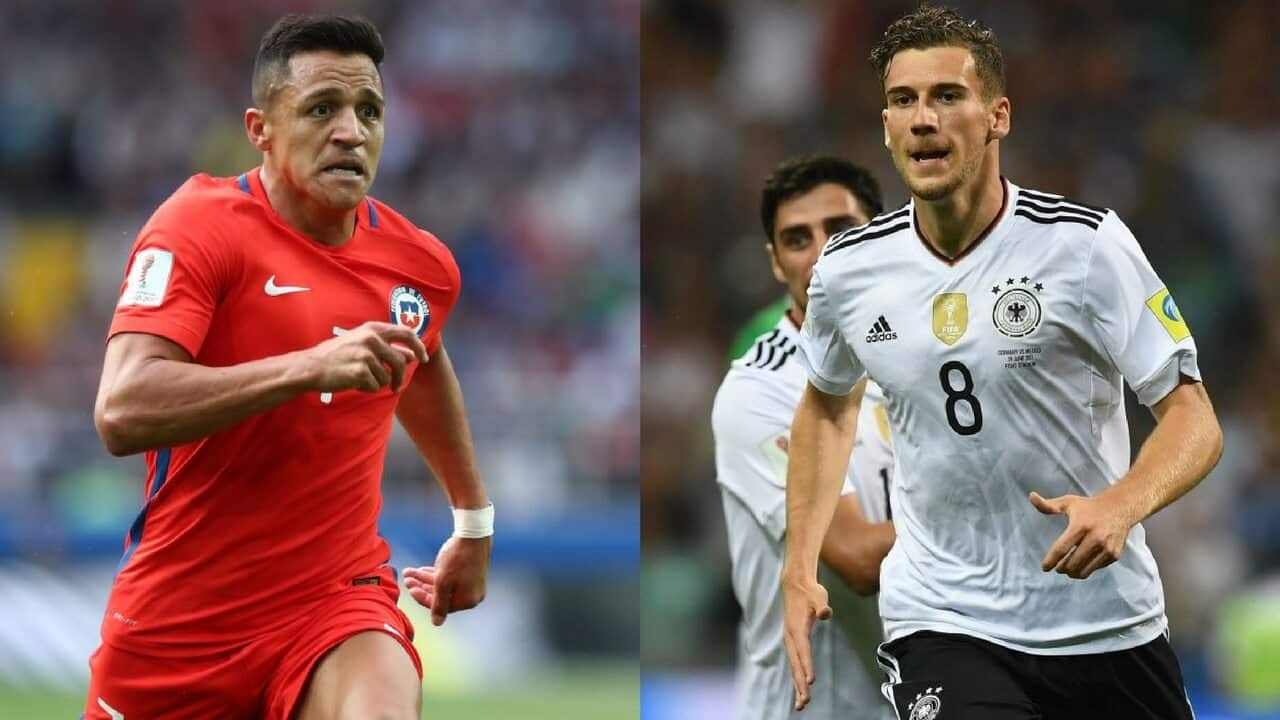 A remarkably consistent team on the international scene in recent times, these are glorious times to be a La Roja fan. Notably, Germany has won only one major title in the past 20 years, which is well under what their world-leading talent pool deserves. Both sets of fans will go into the clash full of confidence.

Ahead of their clash at the Krestovsky Stadium in Saint Petersburg (LIVE on SBS from Monday 3:30am, with a full replay at 3pm), we take a look at how the World Champions and the South American champions face up.

The road to the final

Advertisement
Chile has done as Chile does: whatever it takes to survive and advance. They’ve honed that skill at major competitions in the previous three years and it’s paying off again here. Notably, these finalists played each other in the group stage, ending in a 1-1 draw. But a win over Cameroon and a draw against Australia was enough to secure progress to the knockout stages, where they endured a stalemate with Portugal – only to progress 3-0 on penalties. Juan Antonio Pizzi will be delighted with his side’s performance.

Ever the tournament team, Germany skinned Australia and Cameroon in the group stages, either side of the draw with Chile. They proceeded to slaughter Mexico 4-1 in what was probably the single most impressive display of the entire tournament. So much for this being a “B” team – they’re playing like they belong on the A-list. With or without the trophy, it’s been a brilliant experiment by Joachim Löw.

At 181 centimetres, Werner is no towering giant – not that the the pint-sized Gary Medel (171 centimetres) has ever been bothered by height difference anyway. What may worry Medel, however, is Werner’s explosive ability is proving almost impossible to stop at this tournament. With 21 goals in 31 appearances in the Bundesliga, and another three here, he is in seriously good form.

You’ll have to dig deep into the Confederations Cup archives to find a performance better than the one shown by Bravo in the semi-final. It’s been a tough year for the Manchester City custodian but his response against Portugal was a perfect 10. Not only did he keep a clean sheet in normal time, but for the next 30 minutes and in the penalty shoot-out, saving all three of Portugal’s spot-kicks. It was a colossal response and confirmation of why he’s the national captain with 100 caps to his name.

It won’t be long before the press comes up with a too-clever name for this lad. Leon the Professional? King Leon? Or something wincingly tabloid: Goret-star? Corny names aside, Goretzka has been the single greatest revelation at this Confederations Cup. If Löw wanted to find players to boost his talent pool, he’s done it. Right now, Goretzka is a walk-up starter for the next World Cup, despite the crack midfield unit that already exists. No wonder he’s being compared to Lothar Matthäus.

Chile: Is their attack off the boil?

Nobody would usually accuse Chile of lacking potency around goal, with some of the world’s best attacking talent – Alexis Sanchez, Arturo Vidal and Eduardo Vargas – filling out the front third. But in the last 295 minutes of play, they’ve managed just one goal (Martín Rodríguez’s equaliser against Australia). Sanchez has only scored once in this tournament and the question is worth asking whether too much is being put on his shoulders.

Germany: How will they cope with the red fighters?

Mexico was blasted so quickly out of the water in the semi-final the game (just like the semi-final against Brazil three years ago) was over before it began. But Chile are a step up from Mexico and have top class players on every line, with a wealth of international experience. They’ll get in the face of the German team and the challenge will be to see how the World Cup winners' cope with a style not all that far detached from Jurgen Klopp’s gegenpressing. Will Die Mannschaft be able to find a way through?

There’s a real trend of major tournament finals to go into extra time – think of the 2016 and 2015 Copa America, 2016 European Championship, 2015 and 2011 Asian Cup, 2015 Africa Cup of Nations Final and the 2014, 2010 and 2006 World Cup – and there’s every reason to believe it could happen again here. Germany are noted experts after 90 minutes, but this Chilean team have claimed back-to-back South American championships (both against Argentina) from the spot. With so little separating the teams on paper, it’s where their experience might make all the difference.