Welcome to The World Game’s in-depth preview of the 2017 Confederations Cup. Now we are taking a look at Group B, which houses the world champion (Germany), the South American champion (Chile), the African champion (Cameroon), and, of course, the champions of Asia (Australia). 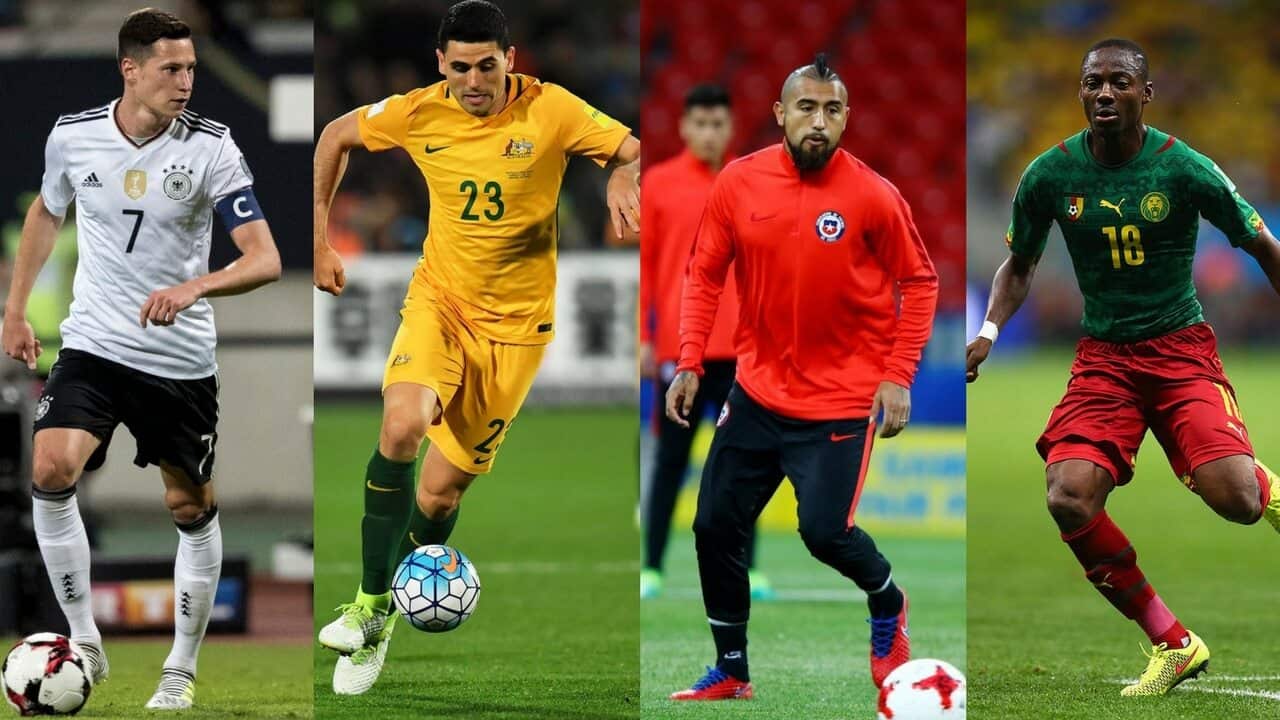 For full details of SBS’s broadcast times of the 2017 Confederations Cup, please visit this page.

READ MORE
How to watch the FIFA Confederations Cup LIVE

Outlook: Australia is back in a tournament it has historically performed well in, making the final and the semi-final at their first two outings. Getting out of the group stage would be a tremendous achievement for Ange Postecoglou and his team, but that might depend on whether he’s bold enough to stick with the controversial three-man defence the team hasn’t adjusted to in recent times. Going to a back four seems a safer bet.

With the Socceroos losing captain Mile Jedinak and requiring a steady hand in midfield, it would make sense that Milligan is not only given the armband but is placed as the “anchor” in front of defence. That would give Aaron Mooy and Massimo Luongo – or Tom Rogic – the freedom to push up the park and support the attack when necessary. Milligan has already proven his qualities as a leader in the A-League and will be primed to deliver again.

How they qualified: 2017 Africa Cup of Nations winners

Outlook: It’s been a long time since we’ve seen Cameroon back on this stage, having briefly fallen behind the likes of Ghana, Senegal, Nigeria and Ivory Coast in Africa’s struggle for power. But winning this year’s AFCON will have done a huge amount to restore local pride and confidence. However, they suffered a big blow on the eve of the tournament with experienced left-back Ambroise Oyongo rupturing his patellar tendon last week, meaning Collins Fai will have to shift from his usual right-hand side. And get a look at Christian Bassogog – two years ago, he was in the USA second division. Soon he’ll be a multi-millionaire in China with the world at his feet.

Aboubakar has caught the attention of clubs across Europe with his pacy, powerful play. There’s been some disciplinary issues (sent off for violent conduct in the Europa League this season) but he also bagged the winner in the AFCON final, which should give him confidence here. Post-suspension, he also shone in the Europa League and there’s said to be a long list of admirers willing to pay Porto handsomely for his services.

How they qualified: 2015 Copa América winners

Outlook: With a determined squad that boasts a unity like no other, Chile is a huge chance to go all the way and win their third major international title in two years. They qualified by virtue of their victory in the 2015 Copa America but then backed it up by winning the 2016 Centenario edition of the same tournament in the same way (defeating Argentina on penalties in the final). Added to their blazing exploits at the 2014 World Cup, it really has been a spectacular time to be supporting La Roja.

One of the most dominant and destructive players in world football, Vidal is a player that would improve virtually any team. He’s played a more balanced role during his time at Bayern Munich, but he’s never been more effective for the national team than he is right now.

How they qualified: 2014 World Cup winners

Outlook: Germany’s enthusiasm for participating in this tournament could be described as mild at best. Löw has rested many of his biggest stars and looked to blood fresh players – most of this squad are 25 or under – ahead of next year’s World Cup. There’s six new faces: Hoffenheim striker Sandro Wagner (who has already scored three goals in two international games), Borussia Mönchengladbach’s Lars Stindl, Hoffenheim's Kerim Demirbay, Hertha Berlin’s Marvin Plattenhardt, RB Leipzig's Diego Demme and Ajax’s Amin Younes. But all of those players are hugely talented and all come in with something to prove.

How quickly times change: Draxler is only a youngster in terms of age (23), but with 30 caps to his name, he’s the most experienced international player in the squad. As such, he’ll be expected to show the kind of leadership that perhaps hasn’t always been in his game to this point. Stepping into the shoes of Philipp Lahm is a seriously difficult ask, too.