Diego Costa and Chelsea team-mate Oscar had to be separated after exchanging robust tackles in training on Thursday. 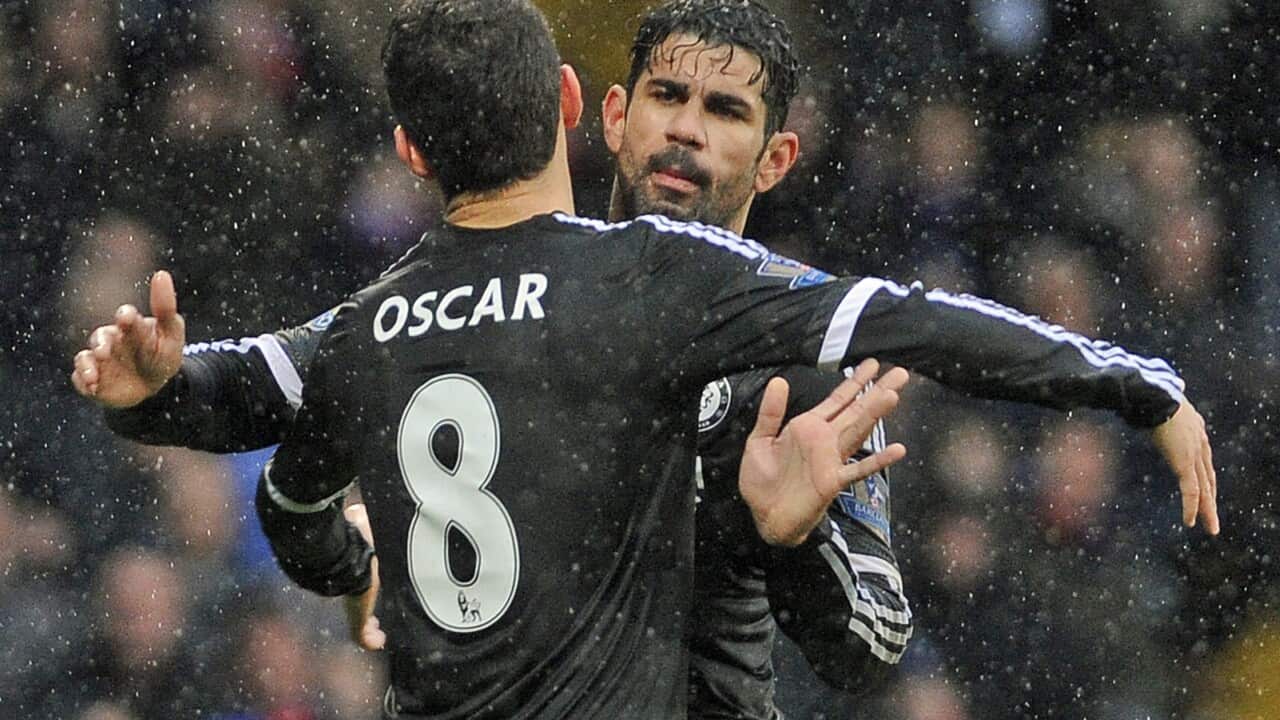 Diego Costa (right) and Oscar had been much closer when celebrating a goal on the weekend Source: AAP

Brazil-born Spain striker Costa took exception to a challenge from Brazil playmaker Oscar and responded in kind in a competitive training session, with a confrontation swiftly diffused.

Press Association Sport understands the incident was laughed off afterwards ahead of this weekend's FA Cup third-round tie with Scunthorpe United.

Oscar referenced it himself, writing tongue-in-cheek on Twitter: "For those who are talking to me and @diegocosta struggle today in training he's lying, he's one of my best friends and never fight."

Advertisement
It was suggested that Oscar had reacted to an earlier tackle by Costa with a studs-up challenge of his own, with one source quoted in The Daily Telegraph describing it as 'outrageous'.

Interim boss Guus Hiddink is likely to be asked about the kerfuffle during his scheduled pre-match media conference on Friday ahead of Chelsea hosting Scunthorpe.

Radamel Falcao was present at Chelsea's Cobham training base on Thursday after flying back to parent club Monaco earlier this week.

The Colombia striker returned to the Principality for checks on his thigh injury at Monaco's training ground ahead of a potential return to the club.

Falcao was hoping to resurrect his ailing career at Chelsea this year, but halfway through a season-long loan with the Premier League champions, he has scored just one goal.

The 29-year-old has not played for Chelsea since the end of October due to a thigh injury and is expected to be out for at least another week with the problem.

The striker returned to Chelsea's Surrey base on Wednesday, but he is understood to be considering an attempt to cut his loan short and return to Monaco.

With Costa and Loic Remy ahead of him in the pecking order, Falcao appears unlikely to get much playing time with the Blues for the rest of the season, which is of concern to the former Atletico Madrid forward.

If Chelsea cannot offer him regular first-team football for the rest of the campaign, it is understood he would prefer to return to Monaco.

Falcao's contract with Monaco expires in 2018. Monaco signed the striker from Atletico in 2013, but he spent just one season in Ligue 1, suffering a major knee injury midway through, before embarking on a disappointing loan spell at Manchester United in which he scored just four goals in 29 appearances.

Prior to his time in England, Falcao was regarded as one of the best strikers in the world after prolific spells at Atletico, Porto and River Plate.

Meanwhile, Chelsea have loaned out fullback Wallace to Gremio until June 2017.

The 21-year-old spent the first half of the season in Serie A with Carpi and now returns to Brazil until the end of the next campaign.