D-day for Mooy with Manchester meeting to determine star's future

The next phase of Aaron Mooy's burgeoning career could be determined as early as Wednesday when his agent meets Manchester City's director of football Brian Marwood to try and settle the Socceroos midfielder's future. 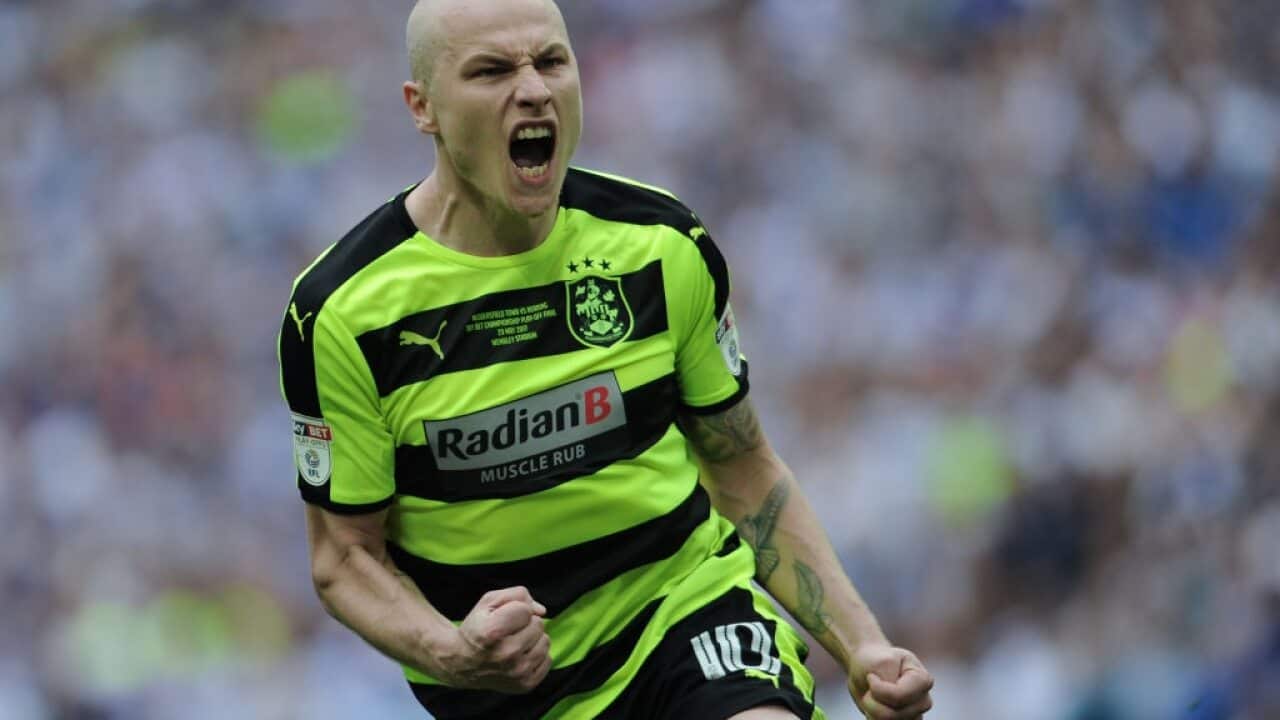 Huddersfield Town's Aaron Mooy celebrates his successful penalty during the shoot out in the Championship play-off final victory over Reading at Wembley Stadium Source: CameraSport

With his future at the Premier League giants to be decided and a crucial World Cup qualifier looming, Mooy has little time to celebrate Huddersfield Town's historic return to English football's top-tier for the first time in 45 years, following their Wembley win over Reading.

The Yorkshire club's loan star flies back to Adelaide for international duty on Thursday, leaving a brief window to confer with representative Paddy Dominguez over the options for next season.

"I'll be meeting with Brian Marwood to discuss the next step for Aaron and what (parent club) Manchester City have in mind," explained Dominguez.

Advertisement
"Obviously they will have a huge say on his future and it will be about finding out what their intentions are.

"Pep Guardiola may want Aaron to report for pre-season and be part of their plans for next season ... that is City's call and we will hope to find out more on Wednesday."

Mooy has three seasons left on the reported $4 million-a-season deal which brought him from feeder club Melbourne City just over a year ago.

The 26 year old has already been targeted by a plethora or Premier League clubs after a stunning year in which he captured a catalogue of awards, including being named the Terriers' player of the season.


"I will of course be sitting down with Aaron to discuss what he sees as best for him and his family first, and then talking it from there," added Dominguez.

"The important thing for him is to be playing regularly next season in what, let's not forget, is a World Cup year.

"Continuing to be an important part of the national team is hugely important to him.

"There's no point in him going to the Premier League just for the sake of it.

"If Aaron does leave Manchester City it has to be somewhere where he is a regular starter, and a place where he can continue to progress.

"He's well capable of achieving that in the Premier League, and in my view has another gear he can click into at the very top level."

After keeping their cards close to their chests while promotion was still only a possibility, Huddersfield's dramatic penalty shootout victory could see them now make a firm bid for Mooy, whose prompting, poise and purpose have been a guiding light this season.

Going up could also be the key to warding off Bundesliga overtures for German coach David Wagner, who has had a defining influence on Mooy's transformation from playmaker to linchpin.

It's believed that Mooy, who City may value in excess of $17 million, will be high on Wagner's shopping list if he agrees to extend his tenure in charge.

"Huddersfield haven't declared their intentions regarding Aaron as yet but they may very well have been waiting to see whether they went up or not to do that," added Dominguez.

"Now they have achieved that feat, they may want to talk about signing Aaron permanently.

"But that's their call and I don't want to try and coerce them in any way."

Mooy was named the BBC's man of the match as he pulled the levers against Reading in a cagey clash which Huddersfield won 4-3 on penalties after 120 goaless minutes.

He will spend precious time with family, friends and teammates before departing for Australia and the duel against Saudi Arabia on 8 June.

His close kin flew to the UK for his wedding last week - and now have something extra to celebrate.

Dominguez, meanwhile, will be working to ensure this breakout season is but a prelude to another momentous chapter in Mooy's career in 2017-2018.

"It's important he builds on what he's achieved ... and I've every confidence he'll do that," he added.