Dennis takes out TT win against stellar field in Romandie

Rohan Dennis (INEOS Grenadiers) was the fastest on the prologue at the Tour de Romandie, finishing ahead of teammates Geraint Thomas and Richie Porte for an impressive 1-2-3 for the British WorldTour squad. 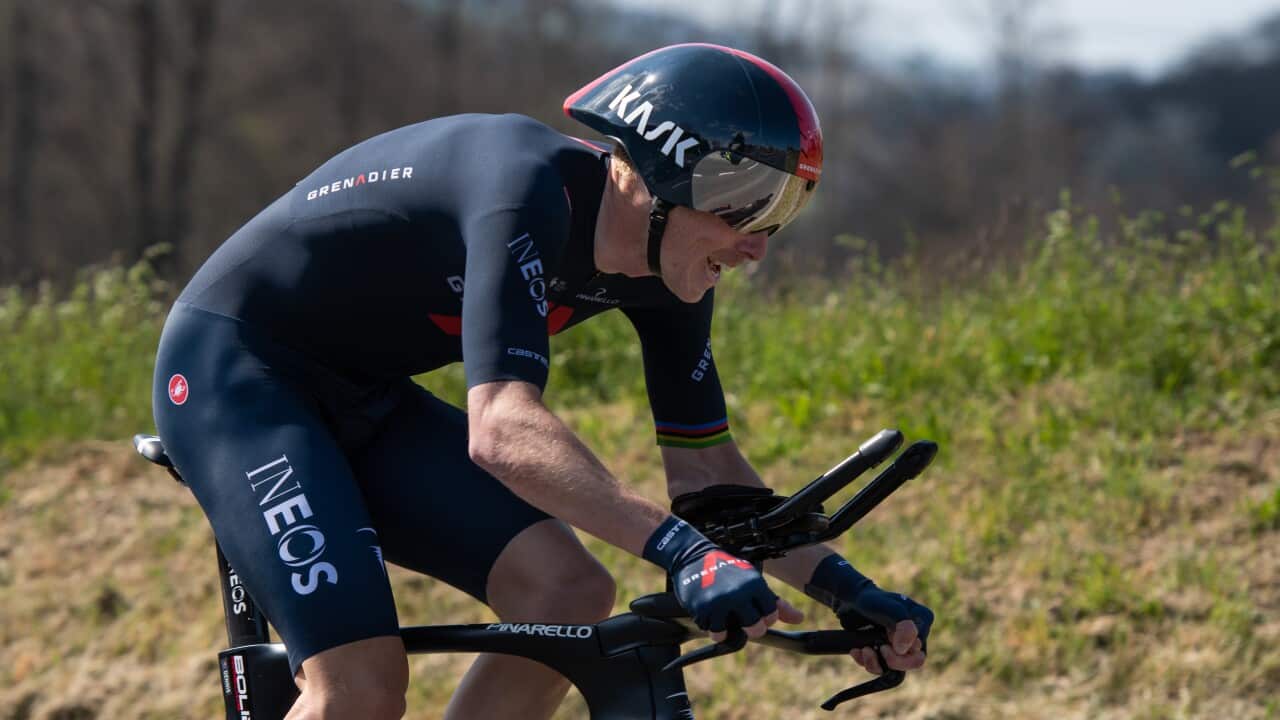 It was a superb victory for Dennis, beating out fancied time triallists Filippo Ganna (INEOS Grenadiers) and Stefan Bissegger (EF Education-Nippo) as the Australian showed tremendous power and technique on the short course that many had thought would be perfect for four-time individual pursuit champion and world record-holder Ganna.

The course was only 4.05 kilometres but finished with an 880-metre ascent up the Route de Bulle at an average of 7.6 per cent gradient.

It was Bissegger that set the early time to beat at the finish, with the Paris-Nice stage winner thundering home in a time of 5'37, but it would be bested by an in-form Dennis, who scorched through the course to better Bissegger's time by 11 seconds with his 5'26.

Advertisement
None would get close to the South Australian's time, though Thomas, Porte and Remi Cavagna (Deceuninck-QuickStep) would also go faster than the Swiss rider's early mark, with Ganna back in ninth.

"It was full gas," said Dennis. "Then full gas even more! It was quite tricky to pace it because there’s still a minute and a half uphill and there’s no way to get the extra speed unless you’ve got the power. That last 700-800m really hurt.

"I thought when I hit the climb that I had gone too slow, but on the climb, it didn't feel like that, the last 400m seemed to go on forever.  It was a tough little finish."
"The legs did feel good, if they didn't feel good I'd be concerned. It was a great day with first, second and third with G (Thomas) and Richie on the podium as well, it was perfect for us."

With the win in the prologue, Dennis will wear the leader's yellow jersey into Stage 1, with a sprint stage followed by some medium mountains stages meaning that it's likely that the two-time world champion in the time trial will hold the lead for some time.

"Tomorrow is more of a sprint, so I'd like to keep the leader's jersey for as long as possible," said Dennis, "but let's see how it goes with the big mountains on Saturday then the final day with the TT, but I think there's plenty of work for me to do for Richie and G."
Dennis has talked of the desire to take more wins at the top level in the time trial now that he's past 30 years of age, saying on an INEOS Grenadiers video after his ride for sixth on the Paris-Nice time trial that he felt that he 'still had more to give'. He brought home the truth of that statement with a performance that saw some of the top time-triallists in the world relegated to also-rans.

"I knew I had to go out hard to stay in contention with riders like Filippo and the power guys and then hope that I could perform on the climb a little bit better than them," said Dennis. "My tactic was to minimise the time on the flat and hit the hill as hard as I could. I didn't lose too much time to G and Richie on the climb and I'm pretty happy with my form."

"It's given me a lot of confidence for the final stage and shown I can do this in such a short time trial, with pure power, I think it's going to be a good week - especially after the last race when I was climbing pretty well, but plenty of work to do yet."

Porte was a notable Australian performance with his third place, while other Australian general classification hopes will be relatively happy with their opening day performances. Jack Haig (Bahrain Victorious) was 19 seconds back in 21st, Ben O'Connor 25 seconds back in 39th and Lucas Hamilton 30 seconds in arrears in 63rd.