Brazil v Argentina drew a crowd of over 95,000 people, where as the Socceroos have only got over 30,000 spectators twice in eight matches. A drop in prices and a change to more appropriate stadiums is needed to bring the big crowds, and atmosphere, back. 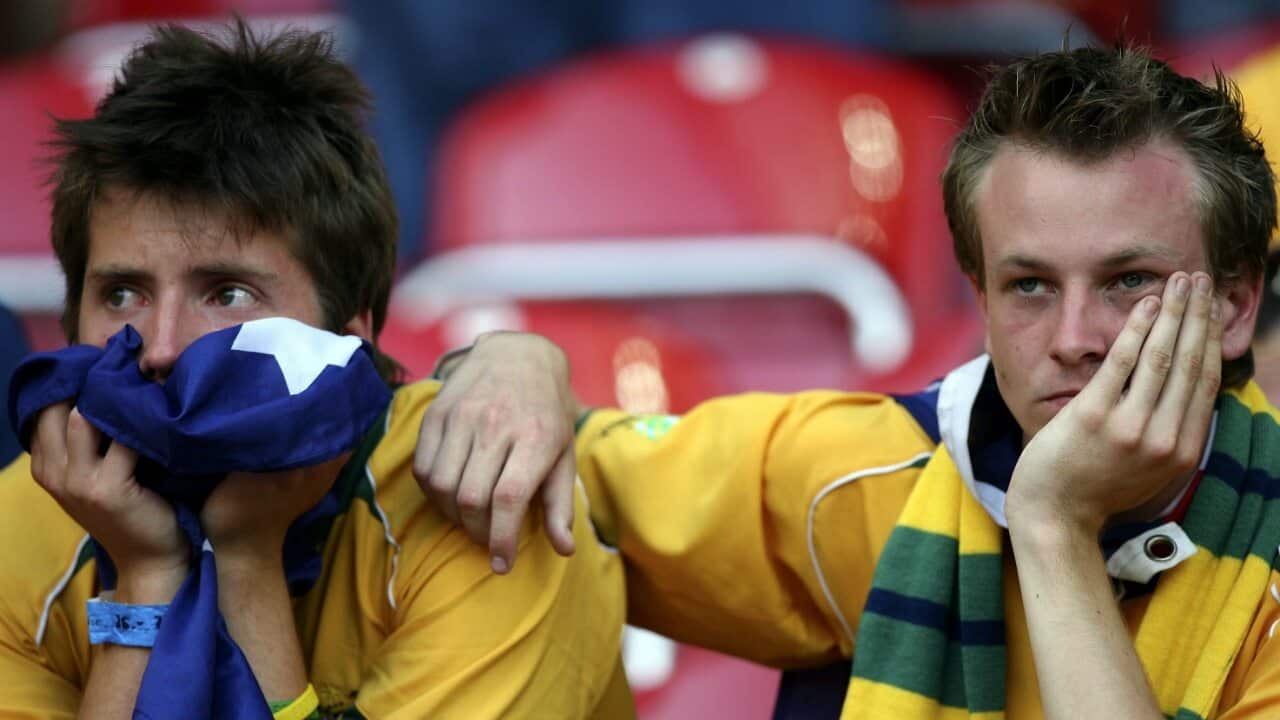 Socceroos fans after the World Cup loss to Italy in 2006. Source: Getty Images

It was a tweet from former Port Adelaide star Kane Cornes that sent Australian football fans into meltdown.

Pointed, parochial and designed to whip up a frenzy. Indeed, Kane has successfully followed his father, the notorious-football hater Graham Cornes, into stirring the hornets nest of the round ball.

Advertisement
We cannot – and should not – take the bait. As an avid follower of both football and AFL, I’m less offended by his dig at football than the insinuation that one can’t follow both sports. It is a pathetic but sadly oft-prevailing view among certain sections.

But the jibes of Cornes and co. aside, the past 48 hours has been highly instructive in helping examine Australia's relationship with football.

We’ve had one blockbuster crowd – one of the largest worldwide for a football match played this 2017 – and one relatively mediocre crowd.

One was a friendly match between Brazil and Argentina. Not even the absence of Neymar could deter 95,569 from coming to witness the game that had nothing riding on the outcome, other than pride and the chance to see Leo Messi on a bitterly cold Melbourne night.

But the night before in Adelaide, when something was on the line, just 29,785 were present.

Australia and Saudi Arabia played out a match that was by far the most important World Cup qualifier so far. And with a 3-2 scoreline, it more than lived up to the hype, settled by a goal from Tom Rogic that Messi or Neymar would have been proud of.

So what accounts for a difference of 65,784 in attendance between the two matches, when one is clearly – and indisputably – more important than the other? FIFA Match Agent, Lou Sticca, has a firm view.

“This is simply a question of supply and demand,” he told the World Game.

“Firstly, we need to drop prices drastically. They're just too high at the moment. The Socceroos are not box office any more – simply because they are all too visible and accessible. Fans see them play six times a year as the 'national team', yet most of them are in A-League each week.”

Perhaps this is where those in and around the game, plus the connoisseurs who follow it, need to better appreciate the labyrinth of issues that can, despite some obvious contradictions, determine interest and attendance.

Australian football is a grass-roots phenomenon, yet our professional league struggles to translate that engagement. We love our major, one-off events – the obscenely large crowds for friendlies involving Manchester United, Chelsea, Liverpool, Real Madrid and Manchester City prove this – but battle to get motivated by major qualifiers.

It wasn't always this way. In late 2006, the Socceroos fielded heavily weakened teams and drew over 30,000 to Allianz Stadium for two Asian Cup qualifiers against Bahrain and Kuwait. In 2008, over 70,000 came to ANZ Stadium for a World Cup dead rubber against China.

Ever since, crowds have been sliding for qualifiers; save for the occasional blockbuster against Japan (the one team with mainstream “cut-through”) and the virtual play-off against Iraq four years ago. It's been slim pickings elsewhere.

Sticca’s view is that the current squad doesn’t have the “awe” factor of years gone by.

"We don't have any genuine stars right now. Viduka, Kewell, and Cahill – when they all played in the Premier League – were really exotic, international names,” he said. “The current squad? With the greatest of respect, they're a bit 'plain Jane'.”

However, Sticca is also adamant there’s other issues which, when combined with the loss of star power, have caused the public to baulk at making the same trip they would have made a decade ago.

"We also suffer from choosing ill-fitting stadiums, most of them with terrible pitches for football. Thursday night should have been at Hindmarsh, packed out with a solid atmosphere,” he said. "In the end, it's not a 'pure' soccer atmosphere, which is one of the biggest draw-cards for fans.

“Add in the fact that it's a crowded, competitive sports calendar, and the opponents on offer are not big draw-cards, and it's become difficult to maintain that level of attractiveness.”

It is disappointing to note that in eight games, the Socceroos have only broken 30,000 twice in this entire World Cup campaign – the first time actually was in Adelaide for the 7-0 hammering of Tajikistan in the second qualifying stage in March last year, the second was the 1-1 draw with Japan in Melbourne in this third qualifying stage.

With a spot at Russia 2018 still up for grabs, Australia has two World Cup qualifiers left to play – one away to Japan in Saitama, before finishing against Thailand at home.

Wherever the FFA chooses to put the match against Thailand, one can only hope there's barely a vacant seat for the night that could decide our World Cup fate once and for all.