Duff slams Socceroos for 'trying to play out from the back'

Damian Duff has lambasted the Socceroos for their commitment to playing the ball out of defence. 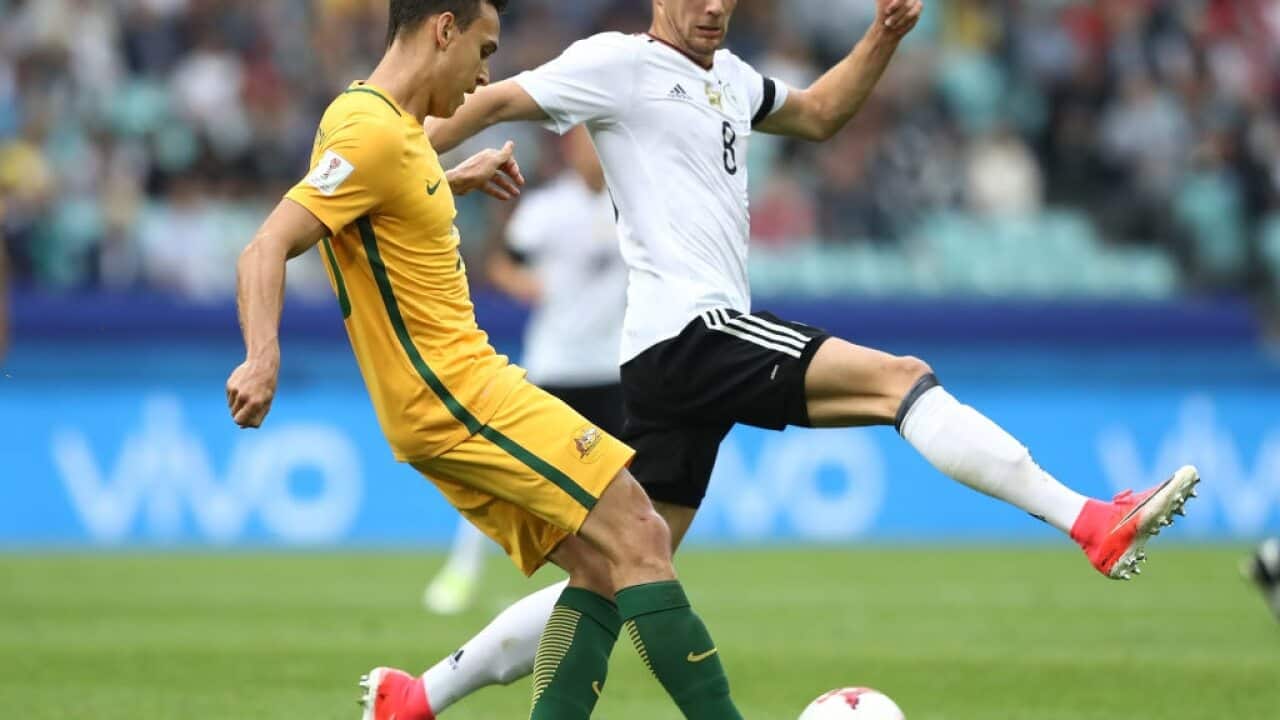 Trent Sainsbury passes his way out of trouble against Germany Source: Getty Images

The the now retired Irish star of Premier League sides Blackburn, Chelsea, Newcastle and Fulham wasn't impressed by the Australia defenders' passing of the ball during the team's 3-2 defeat to Germany.

“I don’t know whether you’d call it (a lack of) composure or just plain quality, I don’t know," said Duff. "They keep trying to play out from the back but (Trent) Sainsbury, (Bailey) Wright, and (Milos) Degenek, they don’t have the quality to do it.”

“When you think of top centre-halves like Hummels, Boateng, Pique, these teams can play and do this, Australia can’t and sometimes it should be, ya know, OK let’s get up the pitch and get seconds."

Advertisement
Duff, who was signed for Melbourne City during the 2014-15 season as a marquee player, only to play 15 games for the club before sitting out the rest of the season injured with a ruptured tendon.

He returned to Ireland to finish his 20-year career and now works as a TV pundit for RTE in his home country, the format on which he was critical of the nation where he formerly plied his trade.

“Over in Australia it’s ingrained in them to play out this way, when I was there, I’ve seen centre-halves standing at corner flags, they’re not great on the ball but they get it off the keeper standing at the corner flag and they try and play, very rarely get out, and then they give away a chance and concede a goal.

“If I’m the goalkeeper and I’m pulling strings and I’m vocal, I’d just say ‘Listen lads, let’s get up the pitch’.

Since taking over as coach of the Socceroos, Ange Postecoglou has promoted this style of playing out of the back as a manager, mirroring approaches brought in by Dutch influences of technical development within Australian coaching and talent identification.

It wasn't all negative from Duff, he was complimentary in the lead-up to the match and even fancied the Socceroos to get a result from the match.