Mitchell Duke began his professional career as a striker, but the J-League based Australian now hopes to push his claims for a national team recall as a winger, or even a wingback. 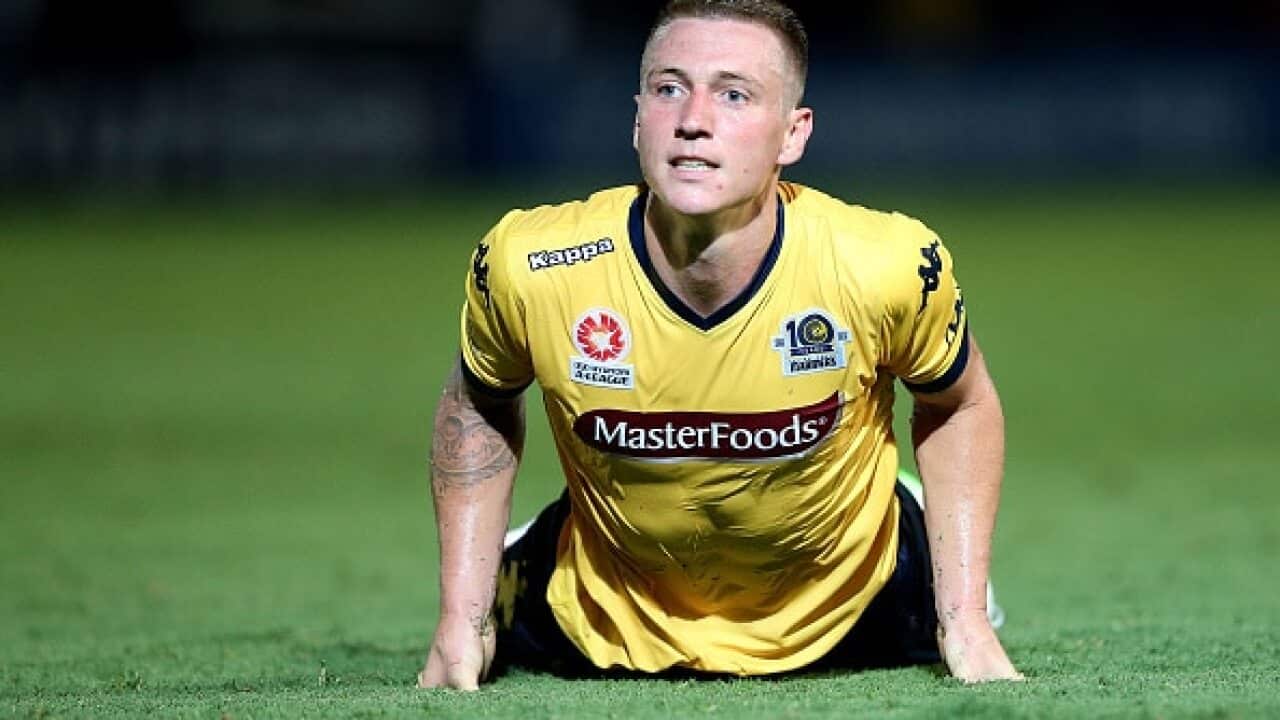 Mitchell Duke is hoping his good form in Japan will earn him a recall for the Socceroos. (Getty Images) Source: Getty Images

Duke is one of only two Australians in Japan's top tier, Socceroos attacker Nathan Burns is the other, and his form is one of the few highpoints in a tough season so far for Shimuzu S-Pulse.

Duke though, has made 23 appearances and earned rave reviews for his ability to adapt and flourish in unfamiliar roles out wide.

The former Central Coast Mariners marksman, who won the last of his four Socceroos cap in the 6-0 loss to Brazil nearly two years ago, was deployed deep by former coach Katsumi Oenoki on his arrival in February, before being pushed up to an outright winger two weeks ago when his successor, Kazuaki Tasaka, took the reins.

Duke, who has conjured up three assists in the past three games, insisted his paramount reason for heading to Japan was to improve technically and iron out the faults in his game which had lingered in the A-League.

He would relish nothing more than a return to the green and gold fold.

“The biggest reward for doing well here would be to get a national team call up again but my main focus was to improve here and if that leads back (to the Socceroos) it would be great,” Duke said.

“I started on the bench until round six or seven, but since then I've been a starting player. I am doing well, playing full games and that’s the most important thing.

“The standard is excellent, I have been really impressed. Technically they are very good. They do lack that bit of strength at times and sometimes I can rise above the level here with my strength and power, which I use to my advantage.”

Duke has no issues with his metamorphosis into a multi-dimensional left-sided weapon.

The quick, powerful 24-year-old, said he has added a few strings to his bow since being re-homed from his previous centre forward role.

“I was a wingback under the previous coach and had a lot of defensive duties in what was a 3-4-2-1 formation, so it was harder for me to get forward regularly," Duke said.

“But after the coach left two games ago, we are now playing 4-4-2 and I’m playing as a left winger. Playing as a wingback was very different for me.

“It’s been a good test for me and it's a different mentality for me going out and not having to think about scoring goals. I am more focused on assists now, which is a new part of my game.

"But now I am back in the mix in the final third, my aim is to finish the season with seven goals and seven assists."

Duke has one goal so far, and he will need to find his shooting boots if he is to reach his target, although playing further up the field will certainly help.

Duke agrees with the consensus that he has become a more complete player during his short time in Japan.

It must be remembered he is still only 24-years-old, and now he is delivering on his considerable potential.

"As a striker back in the A-League there were a few things to work on with my final touch, control and shielding the ball," he said.

“Over here people have been saying that I have improved dramatically with my touch, passing and skills. I think I have fixed some of the faults I had in my game.

"I am not a young boy any more and it’s now or never to become the footballer I should be. From now to maybe 31 or 32 is my peak and I have to embrace it and live up to my full potential.”

Duke has an option for a third year at a club he has become quickly enamoured with, even though results have been hard to come by.

He would like to stay in Japan if possible, and is taking steps to help make himself feel more comfortable.

“I have adapted to life here, it’s an easy life style and the fans and the football are great. It’s the first sport people follow," Duke said.

"Even though we haven’t had the best season so far, the fans are loyal and we always get a full house.

"The language barrier is interesting. Before the kick off we all get in huddle and the captain is speaking Japanese trying to pump us up an I have no idea what they are saying.

"I think back to my time at the Mariners and imagine that’s John Hutchinson talking and pumping us up and use that as a sort of motivation.

“I will be doing some Japanese courses to try and make life easier and I am planning on staying here for longer than my contract says."

The J-League co-founder is under threat of its first-ever relegation. It languishes in 17th place overall, with only four wins, seven draws and 13 losses, after 24 rounds.

Duke said missed opportunities have hamstrung the side, particularly in the past few games.

“We have thrown away points in last few games. We had chances but have missed them and that’s been the story of the season so far," Duke said.

“But the new coach has instilled a stronger fighting mentality. He’s a former Shimuzu player and I think we are going to finish the season strongly and will catch some of the clubs who are only a few points above us.

"Once we build some momentum it will be hard to stop us. When you watch them in training you can't even get the ball off them but it’s not the same in games.

"I don’t know if the pressure gets to the boys and they get stage fright. But under the new coach there will be no excuses.

"With him you don’t know whether you will start and he's not afraid to rotate."

Tasaka's penchant for rotation means Duke could even find himself up top again before the end of the season.

Given how far his game has come since making the move, Duke is excited to see how he would go at the pointy end of the attack.

"We have not been finishing out chances too well and I have spoken to the coach and there may be opportunities to be back in the mix up the middle," he said.

"If that happens, I wouldn’t mind seeing how I go as a striker compared to how I was.

“I think I am getting a good reputation in the J-League, which I wanted to do.

"The Japanese like my work ethic and my fighting spirit, I always give 110 per cent and they appreciate that over here.”