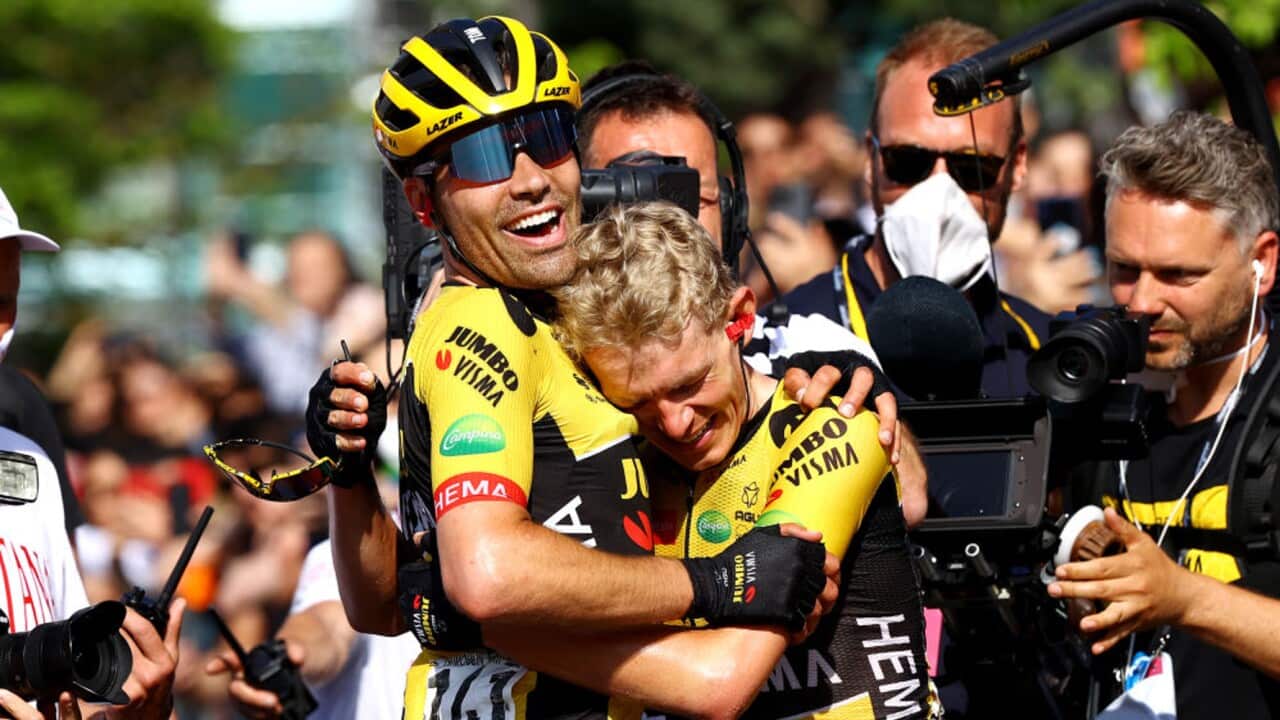 Dumoulin had dropped out of GC contention during stage four’s ascent of Mount Etna but bounced back in Potenza with a performance reminiscent of his very best at the Grand Tour.

The 31-year-old twice battled back from behind in the final 10 kilometres to set up Bouwman for a maiden stage win that snapped Jumbo-Visma’s three-year wait for Giro success.

It took two hours for the first breakaway to form, where Dumoulin – who re-joined the field following an early puncture – found himself going clear of the main bunch alongside Bauke Mollema (Trek-Segafredo) and Diego Camargo (EF Education-Nippo).

Dumoulin darted up the final climb of Le Sellata and briefly lost touch with Bouwman as Mollema and Formolo fought to keep pace, throwing a string of attacks back at the 2017 Giro champion.

To his credit, Dumoulin came back after being dropped not once, but twice on the 10-kilometre run into the intermediate sprint, and he was crucially in the final few kilometres as he controlled the pace, with Bouwman benefitting as he saved all his energy for one final push to the finish line.

Bouwman’s first-place finish was just rewards for an impressive team display on the 196-kilometre journey from Diamante to Potenza, with Mollema and Formolo rounding out the podium ahead of Dumoulin.
“I’m so happy for Koen,” Dumoulin said after the race. “He’s one of the riders who deserves it most in the whole bunch.

“I knew he was going to be the fastest but to get him to the line and to be able to sprint for the win – that was our first objective and we succeeded, so I’m very happy.”

The love went both ways for the Jumbo-Visma pair, with Bouwman acknowledging his efforts, highlighting the bounceback from stage four, where Dumoulin slipped out of general classification contention.

“For us, it’s really important to see Tom so happy,” Bouwman said. “It was a big disappointment for us on the stage at Etna, and for Tom.

"There are still 14 stages to go, but it already seems like he’s already switched in his to a new tactic. I’m sure we will see more Tom Dumoulin in the break and in the last kilometre we will see him there.”

Jumbo-Visma now have some form to build upon as the Giro enters its second week, with Bouwman up to 16th on the GC; 2’19” behind overall leader Juan Pedro Lopez (Trek-Segafredo), and Dumoulin up to 33rd.

The Giro d’Italia continues tonight with Stage 8, a route that starts and finishes in Napoli with some climbs featured on a circuit that will be a testing one for sprinters and puncheurs. Watch from 9:25pm (AEST) via SBS On Demand, or tune in when the SBS broadcast starts at 11pm. WA viewers can watch via SBS VICELAND from 9pm (AWST).
SHARE
Watch the FIFA World Cup, Tour de France, Giro d’Italia, Vuelta a España, Dakar Rally, World Athletics / ISU Championships (and more) via SBS On Demand – your free live streaming and catch-up service.
Watch now