Egan Bernal (INEOS Grenadiers) was solid in final day's time trial to complete the 21-stage journey around Italy, winning the Giro d'Italia after being in the lead of the race since Stage 9. 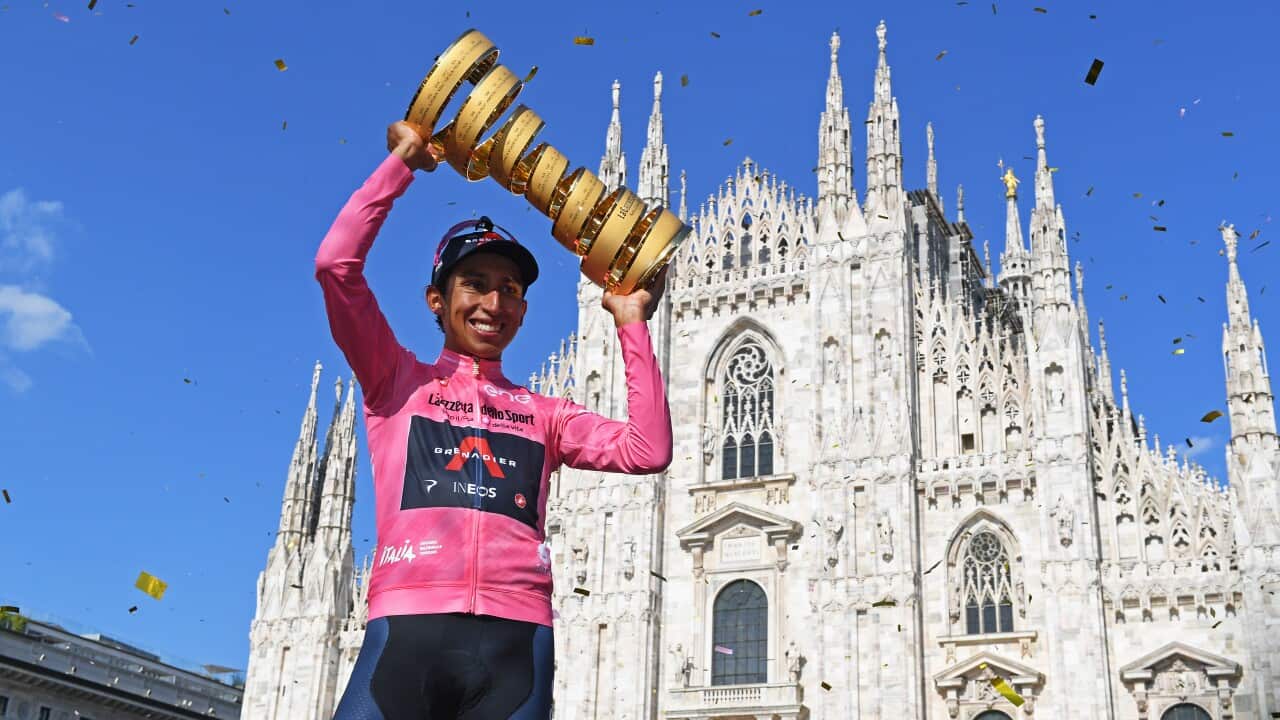 Bernal came into the final stage with a minute and 59 seconds lead over a gutsy Damiano Caruso (Bahrain Victorious) and was comfortable in maintaining that advantage, finishing 30 seconds behind the Italian's time to confirm his overall victory.

"I was just focussed on my effort," Bernal said when asked about how he approached the final time trial. "I was thinking I can't do a mistake, I don't want to lose the Giro in one corner. I pushed in the parts I could push, so in the corners, I don't have to take any risks.

Advertisement
"It's the first time trial I actually enjoyed! I'm always suffering in the time trials, but today was a special one... looking at a lot of Colombian flags everywhere, and people cheering for me."

Bernal, the 2019 Tour de France winner, had spent a few years struggling with a nasty back injury following his breakthrough victory at the French Grand Tour, but looked back to his best on the climbs in Italy. He even dominated the two routes that contained gravel, his mountain bike background coming in handy on the shifting surfaces on Stages 9 and 11. He also won Stage 16 in emphatic fashion and held a commanding lead coming into the final few stages, only looking vulnerable in brief flashes across the three weeks of competition.

When asked to name the toughest moment for him in the race, he talked of seeing Caruso go up the road on Stage 20 and hearing the time checks continue to get bigger and bigger, though Bernal would ultimately restrict the time loss to 34 seconds.

"(The hardest moment) was when Caruso attacked, got in the break and then the gap went up to 50 seconds," said Bernal. "I'd had six teammates around me and then in ten kilometres, I was down to three. We had 50 kilometres left to race. That was hard to handle."

Bernal opened up on what the intervening two years between his Grand Tour wins had been like for the Colombian star, a path of struggling to regain motivation, form and the winning feeling that he recaptured at this year's Giro d'Italia.

"Handling what it felt like after winning the Tour was really hard, it was harder than to win it," Bernal said, "so winning this Giro is a marvellous thing, an explosion of so many emotions.

"I'd won the Tour at 22 and didn't know what to do with my life. It was everybody's dream, it was like - what now? I didn't have the motivation to go on winning, the real deep motivation, the kind of determination to say to myself 'ok, I'll set the alarm for eight, I'll do my stretching, do my core work, do my training, do all my work'."

"I was training, I was doing what I could, the (power output) numbers were good, and I was going really well. But after the Tour, it wasn't the same anymore."

Bernal returned to a hero's welcome in Colombia, and in 2020 he managed to return to Europe and race at near to his top level again, but struggled later, particularly as his back problems flared up on a number of occasions.

"I had my back problem, so with one thing and another I couldn't do what I wanted," said Bernal. "My doubts started again, about being back on this level, having the willpower to win or not…so with this Giro, I've found something that I've lost again."

"It was about racing on my instincts again and I came here to the Giro to do that."

That recapturing of race as a joyous art rather than a dull science has been a revelation for the whole INEOS Grenadiers squad in recent races, and while they've had to race defensively at times, on the whole it's been less about strangling the life out of races and more about putting their stars in the best position to attack.

"Dave Brailsford (INEOS head sports director) has been the person who most helped me in that process," said Bernal, "he told me to go and have fun, to do things like go for a time bonus in an intermediate sprint."

"Brailsford has contributed so much in this victory. He's a great manager and a great person and I'm very grateful to him."

Speculation that Bernal would now head to the Tour has been quashed, with the Vuelta a Espana the next Grand Tour on the Colombian's schedule, the first time he will tackle the Spanish three-week race. With a stacked INEOS Grenadiers roster full of GC candidates for the big races, there's always competition for who gets to mount a charge at the Tour de France, but for the moment, Bernal brushed aside a question about when he would return to the pinnacle of cycling.

"For the moment I'm not thinking about the Tour," said Bernal, "I just want to enjoy this victory, and then rest."

At just 24 years of age, Bernal also took out the young riders' classification, while Peter Sagan (BORA-Hansgrohe) and Geoffrey Bouchard (AG2R Citroën) were confirmed as winners of the points and mountains classification respectively.

On what was a great day for INEOS Grenadiers, time trial world champion Filippo Ganna won the final stage ahead of Remi Cavagna (Deceuninck-QuickStep) in second, with Edoardo Affini (Jumbo-Visma) in third.

You can catch up on all the action from the Giro d'Italia by checking out the spoiler-free page which has links to all the main videos from the 21 stages of action at the Italian Grand Tour.
Find them all by clicking here.