Caleb Ewan (Lotto Soudal) collected his 11th Grand Tour win in Stage 7 of the Giro d'Italia, his second of this year's race with a surge from long-range that saw him power to a convincing win. 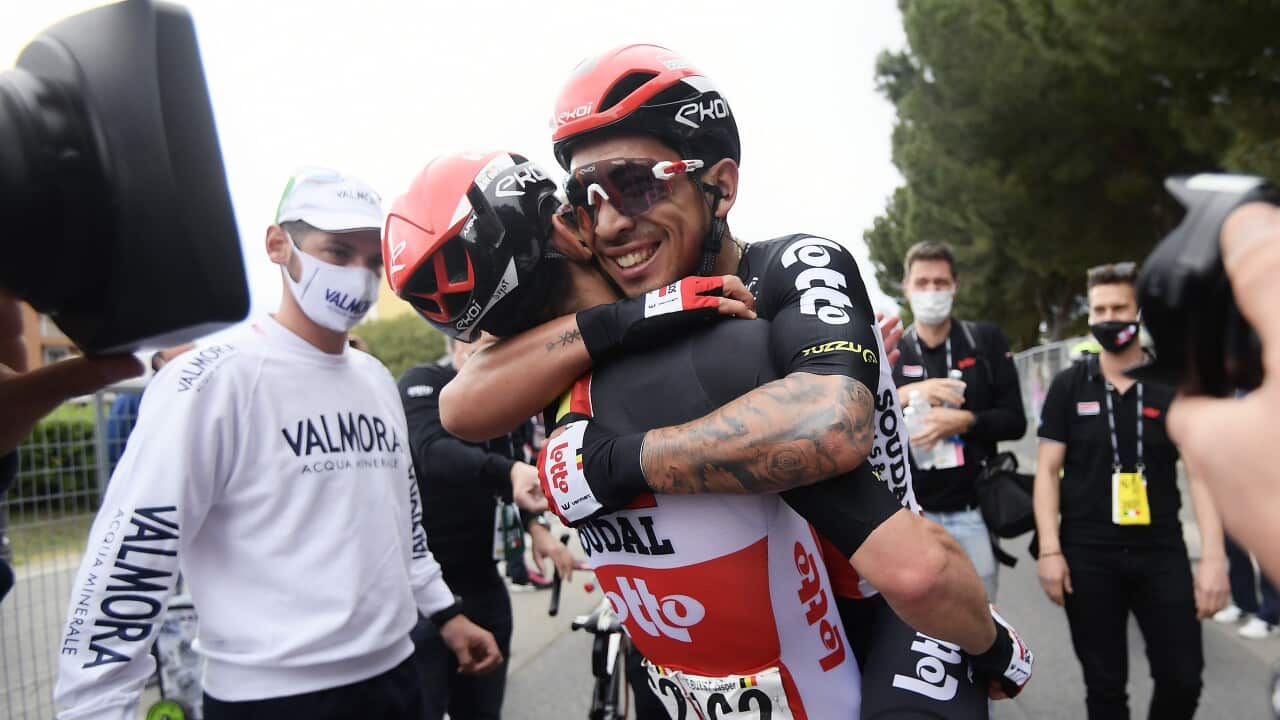 Caleb Ewan is embraced by Jasper de Buyst after his Stage 7 win at the Giro d'Italia Source: Getty

With the win, Ewan has taken off all pressure from a Lotto Soudal squad that was looking around for answers after Stage 2 of Giro, where the Australian sprinter finished tenth, never really having a chance to sprint for the win. He was then absent from the finale on Stage 3 after being dropped on the climbs and the next two flat finishes saw a lot of attention placed on Ewan and whether he could prove himself as the dominant sprinter of the race.

It was just before the Italian Grand Tour that Ewan spoke of his start to the season as his 'worst-ever' from a results perspective. While still regarded as one of the fastest men in the world, the Australian only had the one win to his name at the UAE Tour to show from his early season.


This was a far cry from the returns expected from the rider known variously as 'the pocket rocket' and 'King Caleb' for his immense performances in sprints in recent years. He was clearly in good personal form, his second at Milan San Remo showed that conclusively, but there was a disconnect with his leadout riders that meant the Australian wasn't getting near to the front of races at the crucial point.

Advertisement
It was a point noted by Australian sprint ace Robbie McEwen who spoke on the
Detour Podcast
about how Ewan's approach to the sprints could be, and was, improved.

"After that first bunch sprint, I was going to send a message to him but thought I wouldn't bother him," said McEwen. "My message would have been 'ride it like a Bay Crit'. Some of these towns where they come to the finish with a dozen corners in the last three kilometres, you have to ride it like a criterium and just ride at the front.

"When I saw the footage (from Stage 5), I thought 'you beauty, he's riding at the front like a criterium man'. Jasper de Buyst, he's using him with two kilometres to go... but he (Ewan) managed to slot his way in when it really counted in the sprint itself.

"If you're in front, you can choose what you do, if you're caught in behind then there are no choices, so I thought that was a really good way to ride it."

Sprinting and leadout trains are a very tough thing to master. In a perfect situation, you're arriving with a hot pace that has been set by your team at the front of the race with 150 metres to go, leaving just a short sprint at peak power to victory. In the messy world of cycling sprint finishes, those situations are a rarity, and the reality is that Ewan's Lotto Soudal team have not been able to consistently have anything close to that perfect train in the last few years.

The team switched plans to a strategy similar to the one suggested by McEwen. Arriving earlier at the front of the race with Roger Kluge and Jasper de Buyst in front of Ewan, keeping the Australian close enough to the head of affairs so he could deal with any situation that arose. De Buyst lasted until the 1.2-kilometre mark on Stage 5, but provided a decisive ride on Stage 7, where he lead Ewan up the steep 12 per cent pinch in the final kilometres then chased down a late break of two riders who attacked clear.

Ewan had to deal with the Gaviria attack at 450 metres to go by himself and then still ensure he had enough in the tank for the sprint, but it's clear that when the Sydneysider is put anywhere where he has a sniff of a win, he's good enough to make the most of that opportunity.

Ewan spoke of the leadership role that has been placed upon him by virtue of being the chosen race-winner for the squad.

"It's (leadership) not something that comes really natural for me," said Ewan. "it's something I've had to work on since I turned pro."

"I really got thrown into the deep end very early on, because I had to start winning races straight away so I didn't have a mentor or anything to help me become a leader and I had to figure it out for myself."

Ewan has set himself the lofty goal of winning stages at all three Grand Tours in the same season, a feat only achieved by three riders in history, Miguel Poblet in 1956, Pierino Baffi in 1958 and Alessandro Petacchi in 2003.

"I think it'd be nice, not many people have done it before," said Ewan. "I'd be the first non-European to do it and as cycling is a global sport, if I can go down in history because of that, I'd love to leave some sort of mark in cycling."

"It's a tough thing to do now, a lot of guys are doing great things on the bike, but it's going well so far. However, there are another tough two Grand Tours coming up, and managing how I race them after this is going to be difficult. So it's a challenge, but I'm looking forward to it."

That will likely mean a departure from the Giro d'Italia before the finish in Milan. There are potential sprint days on Stages 10, 13, 15 and 18, but it's unlikely that the current points jersey wearer will continue at the Giro for too much longer with the hard mountain stages looming on the horizon.

"My goal remains the same for this year, and I need to do what's best in preparation for the Tour," said Ewan. "Unfortunately, sprinters legs don't recover in the same way that any other riders do, and if I finished the Giro now I would be dying for the next few months.

"This year so far has been very tough with the weather and a lot of guys legs are hurting a lot. I have to make sure I don't go so deep because if you do, it's hard to start again in the next Tour."

The Australian sprinter is gradually riding and winning his way further into the record books, and at just 26 years of age, there's plenty for him left to accomplish in his already storied career.

The 2021 Giro d'Italia continues tonight with Stage 8, a 170-kilometre medium mountain stage that finishes with an uphill rise into Guardia Sanframondi. Watch all the action of SBS OnDemand from 2030 AEST, with coverage beginning on SBS VICELAND from 2120.