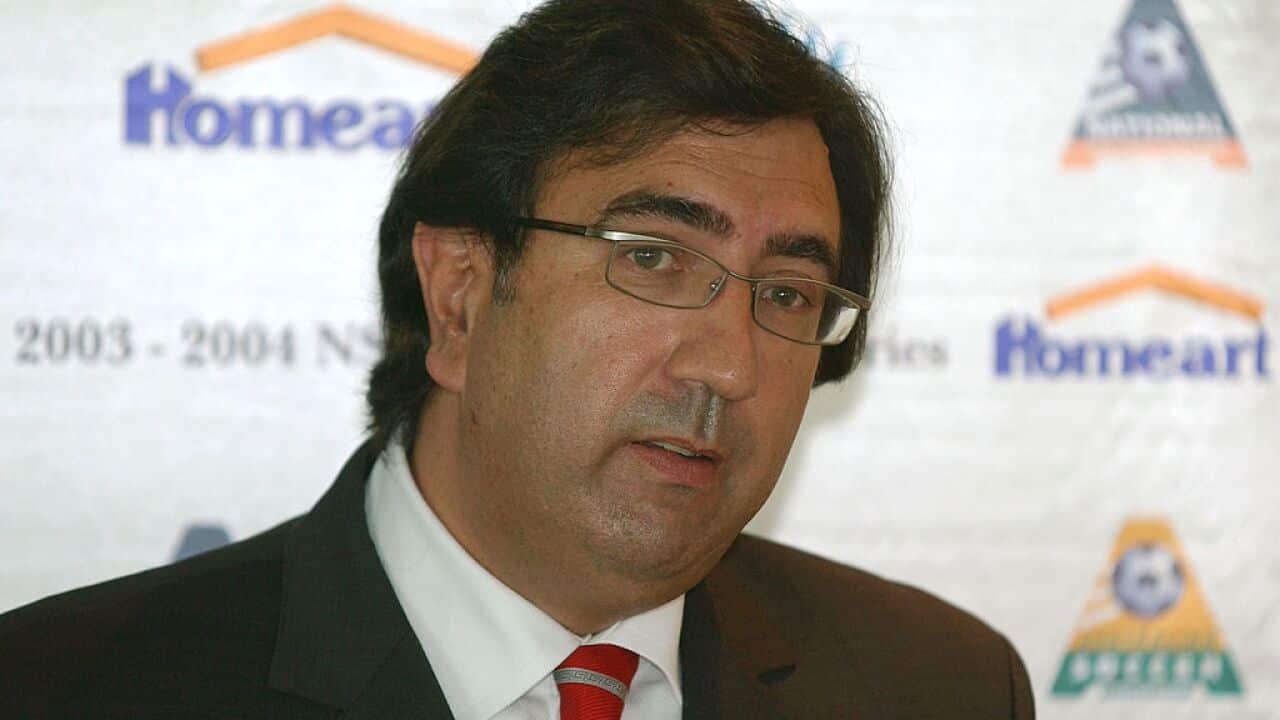 Remo Nogarotto when he was the NSL Commission Chairman in 2004. Source: Getty Images

In an extensive interview with The World Game, Nogarotto revealed his vision to bring A-League fans from the terraces to the boardroom table, unveiling a “public-private”-style ownership concept that he believes would soothe current tensions and accelerate future growth.

Formerly the chairman of Soccer Australia and director of the NSW Liberal Party, Nogarotto has three decades of administrative history in the sport, having served on the board of three clubs – Marconi, Northern Spirit and the Newcastle Jets – and the committee formed by Frank Lowy which established the A-League.

Despite enjoying success away from football in the past decade, heading up political strategist group Crosby Textor and advising the European operations of Macquarie Bank, Nogarotto’s eyes have never strayed far from the domestic game.

Advertisement
“I am not surprised at the angst currently circulating among stakeholders in Australia, including the most important stakeholder of all – the fans,” he said.

“And the fault lines emerging between owners of A-League clubs and their demand for more commercial autonomy, considering they have lost $200 million over a 12-year period, is understandable.

“So when you look at both the needs of the fans and the owners, it's clear neither are satisfied. We simply have to put a new model on the table. The moment to act has clearly arrived.”

Nogarotto said there could be no more unifying act than handing a degree of ownership back to the public, as happens in other countries – most notably in the Bundesliga, where a "50+1" model has thrived for decades.

“We should not close our minds to models that presently exist within other sports around the world. Nor should A-League clubs be intimidated about building our own bespoke investment model,” he said.

“As such, I believe we must seriously consider a co-investment model which sees an alignment between private equity and broader community equity.

“What is abundantly clear to anyone is that we need a more pluralist ownership model than presently exists.”

The ex-Newcastle football director’s initial instinct is that the A-League would be better served – at least initially – by a ratio that doesn’t undercut the owner’s controlling share but still gives fans a real voice.

“I have a sense that 60/40 in favour of private ownership is probably the right balance,” he said.

“But it is too early to commit to an exact ratio. It is the value of community equity in football that needs to be resolved first.

“At the very minimum, a public offering should be made from the outset which the community has the opportunity to take up. If it happens to be under-subscribed, then those shares can be taken up by the private single owner.”

Acknowledging current owners may be reluctant to sell such a percentage of their existing shares, Nogarotto believes the A-League’s next expansion clubs should have a mandatory fan-ownership component.

Teams have been mooted in multiple regions, with the latest bid arriving on Monday from a consortium representing Sydney’s south, spearheaded by broadcaster Les Murray and ex-Socceroo Craig Foster.

“It might be difficult to get the owners of existing clubs to dilute their equity but I would absolutely encourage them to think about it,” Nogarotto said.

“However, for future licenses awarded by the FFA, there is a fantastic opportunity to build this co-investment model, right from day one.”

A move for 35 per cent public ownership at Melbourne Victory was struck down in 2014, with rumours suggesting the move was quashed by a board anxious about fan influence.

But Nogarotto believes a harmonious equilibrium can be struck between wealthy investors and the passion of fans.

“This should not be a concept that invokes fear in the minds of owners. Hearing from some owners that it will invite the “crazies” into the boardroom is not only nonsense but highly offensive,” he said.

“If people have an economic interest in their club, they will surely want the right decisions being made by their board. It's the same principle as holding shares in a public company.”

Football’s history of innovation in Australia is a trait that should be harnessed, according to Nogarotto, admitting the sport could not blindly follow the principles that underpinned rival codes.

“We cannot rely on provincialism, like the AFL or the NRL, and we don’t need to look at overseas leagues with envy any longer,” he said.

“If we can pull this co-investment model off, football will have achieved something that other sports in Australia have not been able to do.

“Our game created the first national competition back in 1977 and 40 years later it has the chance to once again be at the vanguard of innovation. What a thing to be proud of – and to re-unite the whole football family.”