On the 9th of May Donald Trump sensationally fired his FBI chief, James Comey. A day later FIFA's two leading ethics watchdogs, Hans-Joachim Eckert and Cornel Borbely, were both given their marching orders. 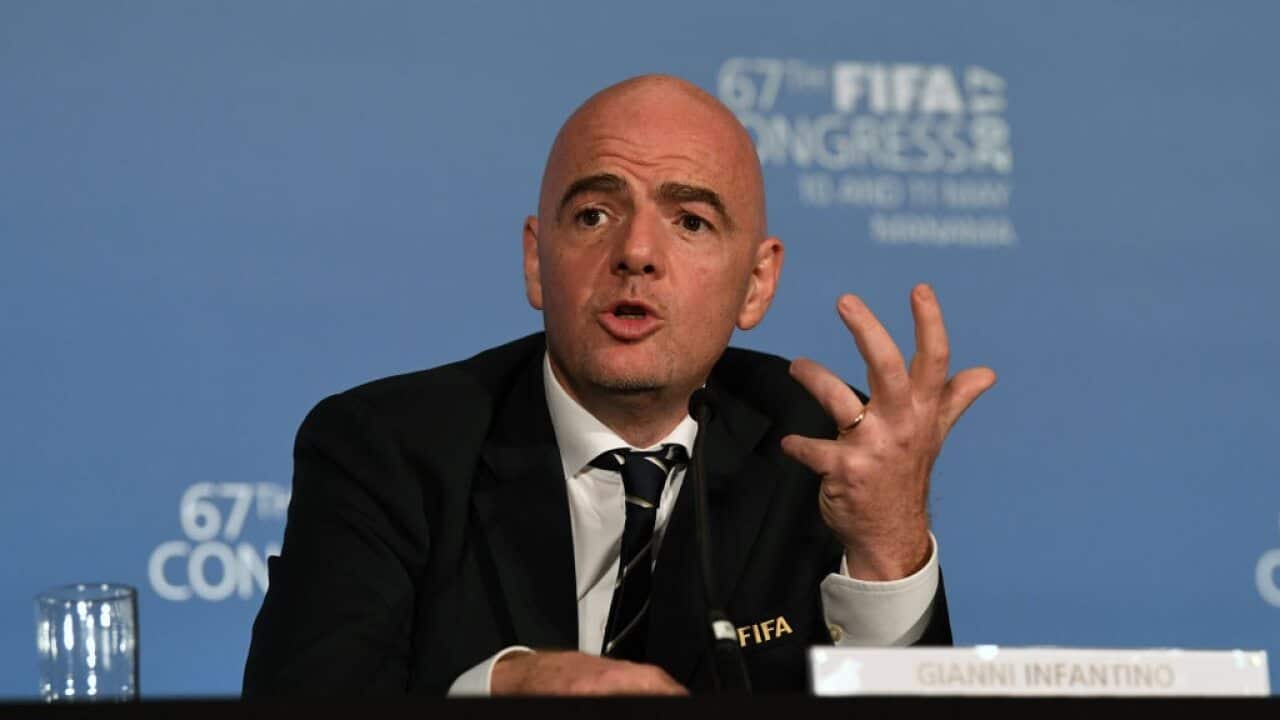 FIFA President Gianni Infantino faces the media during a press conference at the 67th FIFA Congress in Bahrain Source: FIFA

Also suddenly gone was Miguel Maduro, chairman of FIFA's governance committee. So respected was Maduro for his courageous independence that within days two his committee colleagues resigned in protest.

Then, in his opening address at the 67th FIFA Congress in Bahrain the governing body's president, Gianni Infantino, accused his critics of engaging in 'fake news' and of peddling 'alternate facts'. London's The Indpendent surmised that Infantino was channeling his inner Trump.

That is not where the similarity between the FIFA president and the erratic plodder who occupies the Oval Office ends. Like Trump's brief time in the White House, Infantino's 15 month-old FIFA presidency has been a train wreck.

Advertisement
The worst of it is that Infantino has done nothing to advance the theory that the new FIFA has left behind its culture of cronyism, political expediency and naked lust for power, starting with the president himself.

Immediately after being elected in February 2016 Infantino openly declared he will ignore one of the central tenets of the reform process already adopted by the FIFA congress: that the role of the president will now be titular and non-executive. Infantino wanted all the hands-on powers of his predecessor, Sepp Blatter, if not more.

Three months later, at his first FIFA Congress as president in Mexico City, Infantino emasculated FIFA's independent judicial bodies by sneaking through a resolution which gave the ruling council, a politically appointed body, the power to hire and fire members of those bodies. This so incensed Domenico Scala, the reform-minded head of the audit and compliance committee, that he promptly resigned.

In mid-2016 Infantino himself was briefly investigated by the ethics committee for accepting free flights on private jets. He was cleared. More recently he again came to the attention of the committee for allegations that he may have influenced the elections in March for the presidency of the African Confederation in favour of the ultimate winner, Ahmad Ahmad of Madagascar, himself tainted by accusations of bribery in the past.

And now, just as FIFA was preparing for its Congress in Manama, came the bombshell: the axing of Eckert and Borbely, the joint captains of the ethics committee, effectively the conscience of FIFA.

And it went further. Of the 15-member ethics committee only two were left standing. The rest were purged, as were a host of independent office holders, like Maduro and disciplinary committee chief Claudio Sulser.

In their places come alternative political appointees, for example Mahfuza Akhter Kiron of Bangladesh, who replaced Australian Moya Dodd on the FIFA council. Kiron couldn't name the current Women's World Cup holders when interviewed after the election, so deeply steeped she is in what's happening in the women's game.

But she is in and Dodd is out because that is how the Asian Football supremo, Sheikh Salman of Bahrain, wanted it. Salman actively campaigned for Kiron and against Dodd, among the most respected and most experienced women in football administration.

FIFA remains unflinchingly about politics, privilege and the protection of the powerful.

All positions of office, including those on the so-called independent committees, are filled according to which confederation the nominees belong and the whims of the confederation presidents. This is what happened with Moya Dodd. This, believe it or not, was not the case under Sepp Blatter. In this sense FIFA under Infantino has gone backwards.

The ethics committee is the prime example. That committee, and I know this from personal experience, used to be totally independent. Not one member in my time felt threatened by the sack if he voted to rock the boat of the hierarchy. It was because of this a committee of conscience and courage. Its record speaks for itself: it nailed and brought down the most powerful people in football, Blatter, Platini, Bin Hammam, Warner, Valcke.

Now the safety valve of this kind of independence is gone. One has to fear that the new members of the ethics committee will not be trusted for, having seen what happened to Eckert and Borbely, they will live in fear of the consequences of making courageous decisions.

Infantino did well to consolidate his power since he gained office. Not only is he a full blown executive president, contrary to what was stipulated in the reforms, but he has now restructured the executive branch so that power rests in even fewer hands.

That ultimate power is now enjoyed by just seven people, the so-called Bureau of the Council, made up of the heads of the six confederations plus himself. The 37-member FIFA Council which replaced the old executive committee no longer has the power to make executive decisions. That stuff is now all down to the gang of seven, invented by Infantino.

The horrors of the Qatar 2022 decision can now be re-lived.

Among the most significant reforms adopted at the 2013 congress in Mauritius was that future World Cup hosts will be elected by the membership of the congress. Perish the thought. What will now happen is that the gang of seven will decide which candidate to recommend and the membership will rubber stamp its decision. People again can and probably will be bought.

Many rejoiced at the sight of the police raids on the Baur au Lac hotel two years ago, thinking, thank God, the crooks have been caught at last.