The New Year's Eve prank pulled on superstar Tim Cahill by the Central Coast Mariners ball boy was a reminder that the little fellows are capable of a much bigger involvement than just helping the ball back into play. The World Game recalls how some of them ended up in the spotlight. 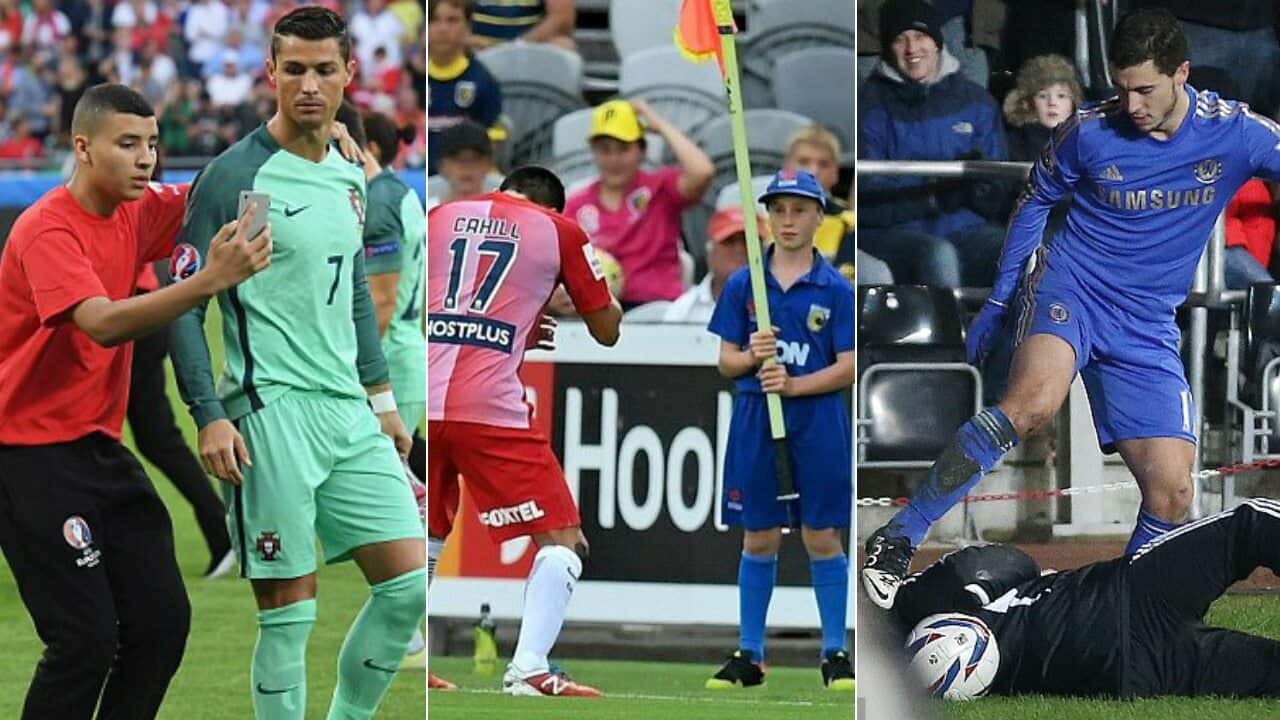 Swansea, playing at home, were locked 0-0 with Chelsea late in the second leg of a Capital One Cup semi-final. Swansea led 2-0 on aggregate from the first leg, so time was of the essence for their opponents.

Advertisement
The ball went out for a Swansea goal-kick and Hazard chased after it in an attempt to speed up the process, but the ball boy rolled on top of the ball. Hazard kick the ball free from under the ball boy, appearing to make contact with the side of his body in the process.

The ball boy was helped to his feet and, clutching at his side, walked off grimacing. Hazard was red-carded.

It subsequently emerged that the 17-year-old ball boy was the son of multi-millionaire Swansea director Martin Morgan and had tweeted pre-match: "The king of all ball boys is back making his final appearance #needed #for #timewasting".

There was some support in football circles for Hazard, with the ball boy being accused of over-acting. The then Queens Park Rangers manager Harry Redknapp was among those critical of the ball-boy, saying: "I can think of a lot of players who would have kicked a bit harder than he did. He just toe-poked the ball away.

"The boy was tweeting before the game that he's a super time-waster. The way he behaved was disgusting."

Hazard was suspended for three games.

Chinese goalkeeper Wang Dalei was about to face a penalty against Saudi Arabia in Brisbane when he turned around to ask the ball boy which way he should go in an attempt to make a save.

The ball boy didn't hesitate in telling him to go left and Dalei took his advice, diving to his left and saving the spot kick.

An ecstatic Dalei raced behind the goal to thank the ball boy for the tip and China went on to win 1-0.

The ball boy, Stephen White, became the centre of attention for the media covering the tournament and was invited to attend a China training session as a thank you from the team.

3. When a ball boy sees a chance, he has to take it, European Championship, 2016

If you're lucky enough to find yourself in presence of football greatness - Cristiano Ronaldo, in this case - and you've got a mobile phone in hand, well, what are you supposed to do? Not ask for a selfie?

Two excited ball boys had their wish come true when they used their positions to get close enough to Ronaldo before his Portugal side played Wales in a semi-final.

The first one collared him for a hug and a snap together on the field, skipping away in celebration after it, and the second also grabbed a hug before sticking around to be the odd man out in a team photo.

Ronaldo was gracious in allowing the ball boys their moment of sheer joy, rather than have stewards shoo them away, and, who knows? Maybe the football Gods smiled down on him in appreciation.

He went on to score the opening goal in the 2-0 win over the Welsh and then captained Portugal to a 1-0 extra-time win over France in the final.

Guarany, trailing 1-0 against Sergipe late in a Campeonato Sergipano game, sent their goalkeeper forward for a corner only for Sergipe to break quickly off it.

The Guarany 'keeper couldn't get back in time, but their ball boy calmly stepped in front of goal to clear a shot off the line before sheepishly jogging away to the side of the pitch.

The crowd loved it, but the incident led to a scuffle between the two teams and since the team that was the victim of the ball boy's effort led anyway the referee sensibly ruled fulltime, giving Sergipe the win.

If you haven't seen it by now, you must be living in a cave.

Cahill scores for Melbourne City on the road against Central Coast Mariners and heads for the corner flag to perform his trademark boxing celebration, but the ball boy, in a pre-conceived prank, removes the corner flag and steps back several metres, all the while staring Cahill down.

The Aussie superstar goes ahead with his celebration anyway, boxing thin air, and takes it all in good spirits, later tweeting: "Thanks for having me @CCMariners good to see you guys were ready and knew my celebration was coming".

The football world was impressed by the ball boy's gumption, with the UK's Daily Mirror declaring: "This kid has got some serious cojones - he doesn't look away once!"