Liverpool fans will get the chance to farewell Reds legend Steven Gerrard in the game against A-League champions Sydney FC at ANZ Stadium tonight. The World Game recalls some of Gerrard's greatest days in the famous shirt. 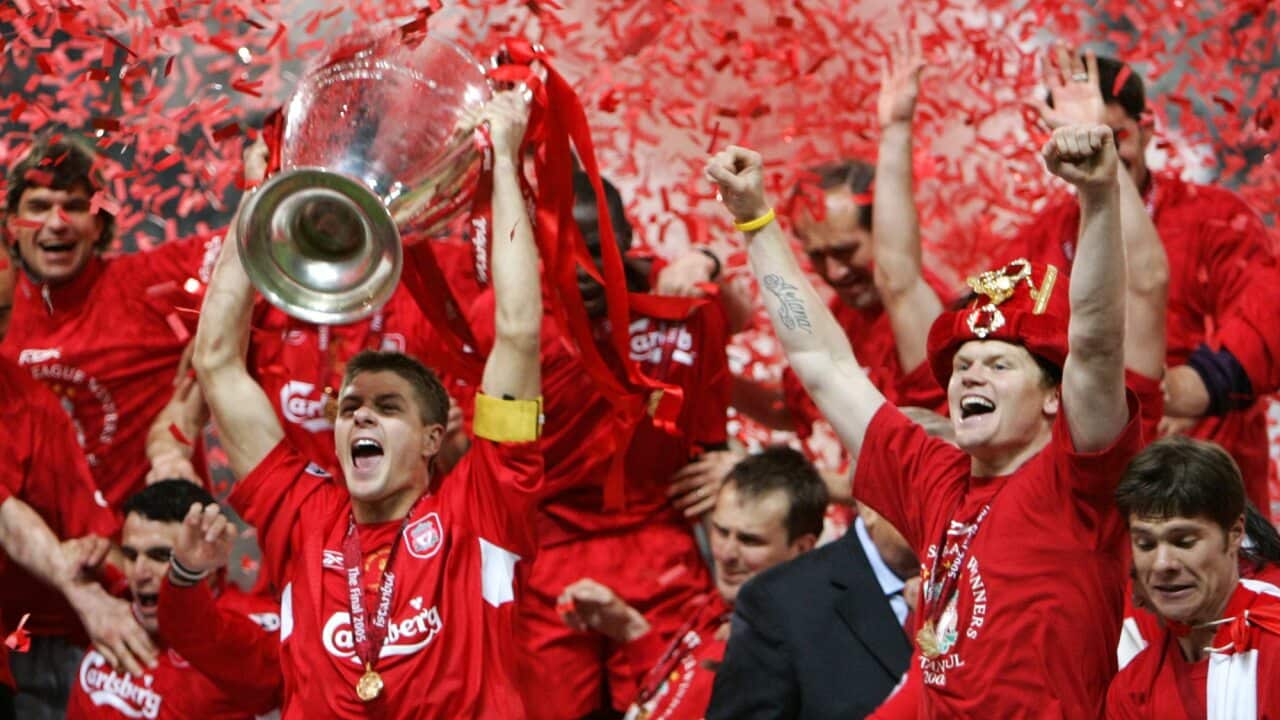 Gerrard has been confirmed to start against the Sky Blues and his list of feats for club and country are extraordinary - easily explaining why he is among the most feted players of the modern era.

What he did for Liverpool in many instances surely won't be repeated. Here are five of the most incredible Reds moments for this footballing icon.

Gerrard kick-started what would become known as the 'Miracle of Istanbul', coming up with a header to score the first goal of a comeback from 3-0 down at halftime against AC Milan in the final, with Socceroos icon Harry Kewell starting but going off injured.

He also won the penalty that led to the third goal, Xabi Alonso putting away the rebound after his own spot kick was saved.

Three goals in six minutes and it was 3-3 with still 30 minutes of normal time remaining. The game went to extra time and finally penalties, where Liverpool won 3-2 in the shoot-out.

Gerrard was fifth on the list to take a penalty for the Reds, but didn't have to.

In what became known as 'The Gerrard final', Liverpool kept coming from behind to stay alive in a pulsating game against West Ham United, leaving it dramatically late to force extra time and finally winning on penalties.

The Reds were 2-0 down in the first half when Gerrard delivered a ball into the penalty box that set up a goal for Djibril Cisse. Liverpool equalised through a Gerrard volley in the 54th minute, but again fell behind and were trailing 3-2 entering added time.

That was when Gerrard stood up again to keep Liverpool in it with a thundering half-volley from more than 30 metres out that went low and beat West Ham goalkeeper Shaka Hislop.

Added time went without goals and then Gerrard scored from the spot in a 3-1 win in the penalty shoot-out.

3. A century of European appearances celebrated in style, 2009

Gerrard marked his 100th game in European competition emphatically, scoring a double - both from the penalty spot - in a 4-0 win over Real Madrid at Anfield on March 10.

It turned out to be quite a week for him, because four days later he scored his first goal at Old Trafford - again from the penalty spot - in a 4-1 win over Manchester United. And eight days after that he scored his first Premier League hat-trick, in a 5-0 win over Aston Villa.

Could there be any better way for a Liverpool great to celebrate 400 games in the top flight than with a hat-trick in a 3-0 over Everton in a Merseyside derby? Surely not.

Gerrard scored once in the first half and twice in the second to send Everton packing.

It was the first hat-trick in a Merseyside derby since another Liverpool legend, Ian Rush, scored four times at Goodison Park in 1982 and the first at Anfield since 1935, when Fred Howe scored three for the Reds.

Gerrard had gone to 99 goals with his single in a 3-1 win over Crystal Palace at Anfield on October 5 and he wasn't about to dwell on that figure. In his next game he scored from a penalty in a 2-2 draw at Newcastle United to make it 100.

The penalty spot can be the loneliest place on earth under pressure, but Gerrard was always among the deadliest players of his generation from there.

He finished his Premier League career with 120 goals from 504 games.