Australia face Denmark on Thursday, with the Socceroos desperately needing a point or more to keep their FIFA World Cup hopes alive. Here are five things to keen an eye on at the Samara Arena. 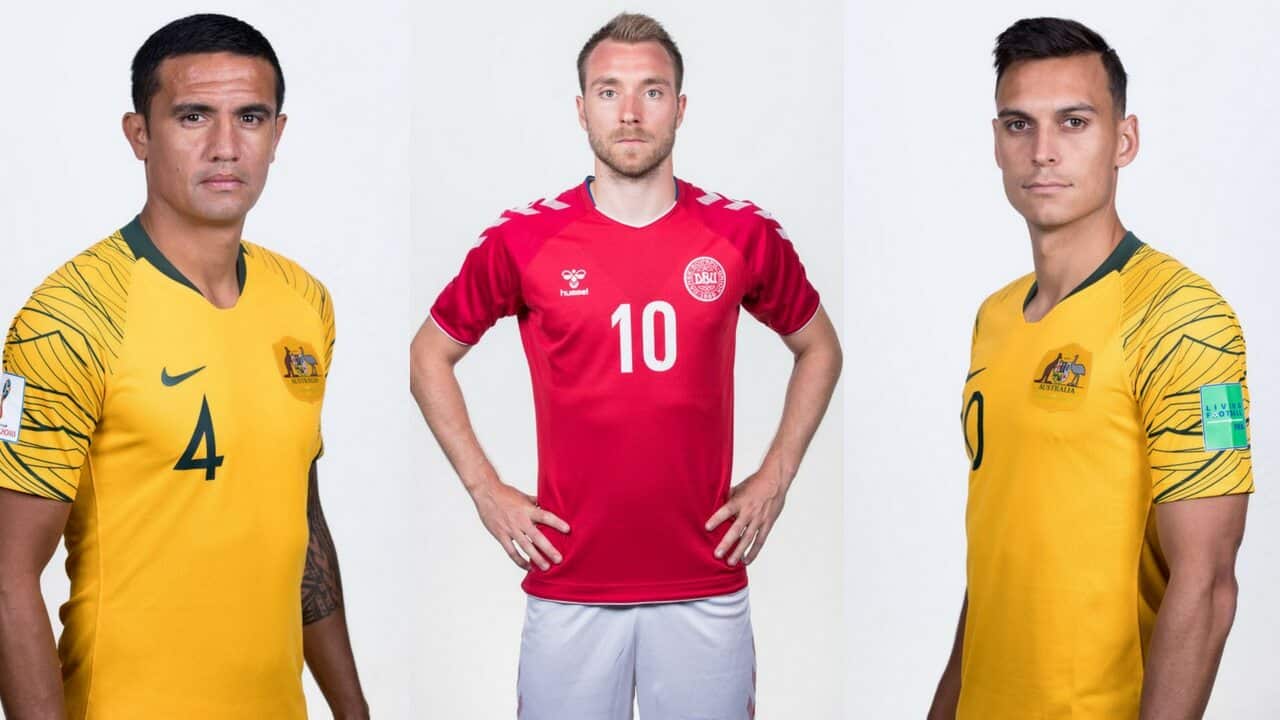 The Socceroos’ meeting with Denmark will define their World Cup campaign.

If Australia loses, it would take a miracle for the team to still progress to the round of 16.

Draw with the Danes, and Australia will need to beat Peru in Sochi next week and hope that other results go their way.

Advertisement
Win, and the Socceroos retain full control over their Russia 2018 destiny.

With those permutations in mind, here are five things we will be looking out for on Thursday night (AEST).

1. Where will the goals come from?

A few half-chances aside, neither Andrew Nabbout nor his replacement Tomi Juric consistently troubled French custodian Hugo Lloris on Saturday.

That the Socceroos’ lone goal came from a penalty was indicative of their attacking woes.

Australia’s World Cup hopes now rest on the forward-line being able to penetrate the Danish defence.

Van Marwijk must decide whether to keep faith in Nabbout, give the start to Juric, or experiment with another member of his strike force.

Further complicating matters: Danish goalkeeper Kasper Schmeichel was immense in the second half against Peru on Saturday.

Australia will desperately need to find a way past him, or the World Cup will end in disappointment for the national team.


2. Does van Marwijk stick with his midfield?

The big question mark leading in Australia’s World Cup opener against France was the composition of the three-man central midfield.Van Marwijk opted for Mile Jedinak and Aaron Mooy at the base, with Tom Rogic in an attacking position.

It proved to be an inspired decision, with Jedinak and Mooy performing a stellar job in keeping France’s imposing forward line quiet.

While Rogic was not as impressive – anonymous at times– his work moving the ball forward was missed when he was substituted.

The dilemma for van Marwijk is this: Australia need to both contain Denmark’s creative options as per the France game, but play more expansively if they are going to find the goal/s that will be required.

Is Jedinak dropped for Massimo Luongo? Does Jackson Irvine, who was brought on in the second-half against France, find himself in the starting XI?

Or does the new Socceroos boss stick with what worked against France, and hope the goals will come?

Denmark are no one-man team.

Werder Bremen’s Thomas Delaney is a rock in the midfield, Yussuf Poulsen scored Denmark’s winner against Peru and captain Simon Kjær provides a steadying influence at the back.

Ugandan-born Pione Sisto, meanwhile, is an unpredictable winger capable of causing havoc on the flanks.

But the beating heart of the Danish dynamite is Christian Eriksen.

The Tottenham star had a quiet game against the Peruvians, who managed to isolated him.

While he provided the assist for Poulsen’s goal, Eriksen struggled to fulfil his usual creative role.

If the Socceroos can replicate Peru’s efforts, Australia will be well-placed to secure the result they require.

If Eriksen is allowed to roam unchecked, it could be long night for Australian football fans watching at home.

4. Will Australia’s fitness shine through?

Match day two of the World Cup can be particularly physically demanding.

Players on both teams have had just four days rest from their opening games.

And unlike the final Group C matches next Tuesday, this clash lacks the same adrenaline rush of a potentially final, do-or-die encounter.

After a lengthy pre-tournament training camp in Turkey, the Socceroos are reported to be in top physical condition.

Van Marwijk indicated on Wednesday that all 23 players are available and there were no physical concerns.

Australia has the added advantage of a short transit from base city Kazan to Samara – less than an hour’s flight – while Denmark are making the lengthy trip from Anapa, a resort town on the Black Sea.

5. Who will van Marwijk turn to as super sub?

If plan A fails, coach van Marwijk is fortunate to have several attacking options up his sleeve.

Jamie Maclaren is unlikely to start, but the confidence he brings from his strong year at club level could lift the Socceroos if brought on as a substitute.

Van Marwijk opted for Daniel Arzani against France, bringing the youngest player at the tournament on with six minutes of regular time remaining.

He told the media during the week that just one thought went through his mind while warming up: “Jesus Christ - this is pretty cool!”

Will Arzani again be given an opportunity?

Or will Australia’s Dutch manager turn to Tim Cahill, the man who has saved the Socceroos on countless occasions in the past?

At 38, some dismiss the veteran’s ability to impact a game in the same way as he did during his prime. But Denmark would write Cahill off at their peril.