An all-time classic, viral finish and failed fairytale capped off what was a captivating weekend of A-League semi-finals football. 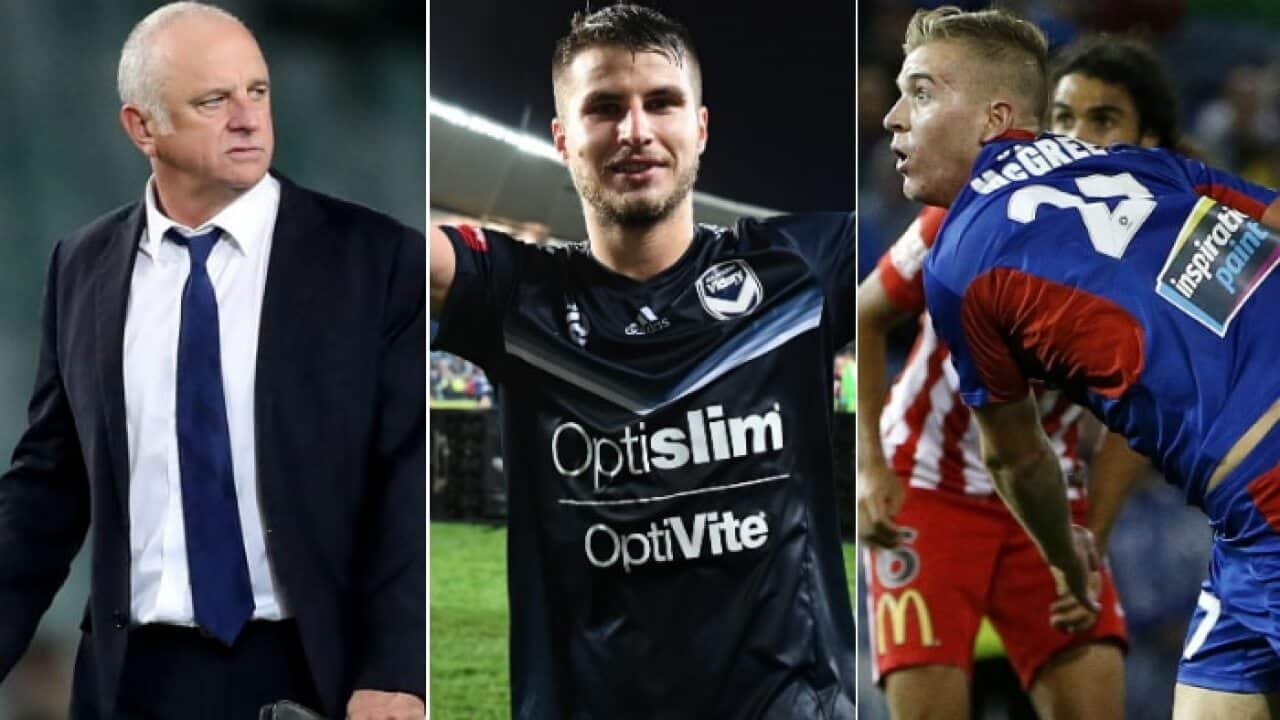 Melbourne Victory’s enthralling 3-2 extra-time win over Sydney FC signalled the end of an era, with Graham Arnold set to take over the Socceroos at the conclusion of the 2018 FIFA World Cup.

Despite the Sky Blues retaining the Premiers' Plate this season, Saturday night's defeat will leave a bitter taste in their collective mouth after Terry Antonis' redemptive strike ensured Arnold would not end his tenure on a grand final high.

Advertisement
"Sometimes you wish for fairytales," Arnold said after the game.

"You wish you can go out with that trophy and that's your last thing.

"I still believe, even with this result, we're the greatest team the A-League has seen."

With just six domestic defeats, two league titles, an FFA Cup and an A-League championship to their name over the past two seasons, Arnold's record-breaking side are indeed worthy of such a title, but perhaps Ange Postecoglou's Brisbane Roar need further consideration.

Spanning 2010-11 and 11-12, Postecoglou's Roar claimed a Premiers' Plate, back-to-back championship triumphs and set a record 36-game unbeaten run – the most at the top level of any Australian football code.

The former Socceroos coach introduced a style of football revolutionised by Barcelona and succeeded within an 11-team league – including Arnold's Mariners – arguably stronger than this season's competition.

And while Arnold's 42 A-League victories stand seven more than Postecoglou's total across said seasons, the latter's overall success and philosophy is enough to prolong this dividing debate further into the future.

All hail the scorpion king

McGree scored arguably the goal of the year against Melbourne City on Friday night, with an instinctive scorpion kick that brought the boisterous 19,131 supporters in attendance to their feet and sent waves around the world.

After Colombia goalkeeper Rene Higuita first executed the manoeuvre against England back in 1995, only a handful of players have since managed to score a goal from it.

Just ask Olivier Giroud, whose improvised finish of similar ilk against Crystal Palace in the Premier League earned the France international goal of the year honours for 2017.

"It's hard to describe," McGree said of his effort.

"I just had forward momentum and tried to get the ball going forward and swung my leg out.”

The 19-year-old inspired the Jets to a 2-1 come-from-behind win and a relieved Ernie Merrick – who sat motionless at the time of the goal – was quick to praise his talented midfielder.

"Riley told me he has been practising that for the last two or three weeks, and it came off for him," Merrick said.

McGree, a supremely talented central midfielder on loan from Belgium's Club Brugge, will now recoil in preparation for another starring role in the grand final next week.

"When I heard the Sydney fans singing my name, giving me crap, it just made me more angry - made me motivated."

Terry Antonis has to be the most relieved man in Australian football right now.

After his last-minute own goal helped Sydney FC level the scores in their semi-final on Saturday night, a determined solo run and 116th-minute strike soon sealed the Victory’s passage into the grand final.

And with the aforementioned events coming against his former club, you could forgive the 24-year-old for getting emotional.

"The last minutes of the game, to score the equalising own goal and then to get the winner, it's just an unbelievable feeling."

After Antonis' attempted clearance sliced into his own net, his winning effort took a telling touch from Alex Wilkinson to evade a diving Andrew Redmayne and send the Victory fans, players and coaching staff into raptures.

The central midfielder's narrative represents a first for the A-League, and is a reminder of football's unparalleled theatre and ability to entertain in this country.

Entering this season, the Jets were a club bereft of belief and condemned to defeat after a miserable, multi-coached campaign that yielded yet another last-placed finish.

But if there was one person primed to turn the club's fortunes around, not even Ernie Merrick envisaged the rebuilding process to take this little time.

"I didn't expect to get in the grand final but I thought we would make big steps forward from where we've been the last few years," Merrick said.

Jason Hoffman's effort 15 minutes from time completed a 2-1 come-from-behind win over City on Friday night, and booked the Jets a place in the grand final for the first time in 10 years.

Merrick's experience, recruitment and attacking philosophy saw the Jets crack club records at will this season, and they will have the chance to break another against the Victory on Saturday.

Success would see the Hunter club add to their 2008 heroics against Central Coast Mariners, and return the region to the forefront of the nation's sporting landscape.

And as Kevin Muscat's men prepare to enter the cauldron of noise that is the McDonald Jones Stadium, there's never been a better time for the Jets to finish the job.

The A-League grand final will have a new 33,000-seater home on Saturday when the Jets face the Victory.

Newcastle's own McDonald Jones Stadium will house the big dance after premiers Sydney FC fell 3-2 to the Victory after extra-time, and the home side will no doubt fancy their chances of a full house.

"To have a grand final in Newcastle with a sell-out crowd will just be great for football and the A-League – and absolutely amazing for Newcastle," Jets CEO Lawrie McKinna said.

"What the Jets have done this year proves that dreams come true."

Ernie Merrick will face Kevin Muscat – a man Merrick coached to two A-League championships between 2005 and 2011 – in the dugout in front of numerous Novocastrians hoping for their first piece of silverware since 2008.

The Victory meanwhile, have found moments of joy few and far between in the Hunter, with just three wins in 19 visits, but that hasn't deterred Muscat's confidence one bit.

"Throughout the week we'll hear it all about our record in Newcastle," Muscat said.

After a rather inconsistent campaign, the three-time champions find themselves back in the grand final for the second successive season.

And, having already denied Graham Arnold a dream departure at Sydney FC, they would no doubt pounce on the opportunity to rain on Newcastle's parade.